Himavat means something in Hinduism, Sanskrit, Jainism, Prakrit, the history of ancient India. If you want to know the exact meaning, history, etymology or English translation of this term then check out the descriptions on this page. Add your comment or reference to a book if you want to contribute to this summary article. 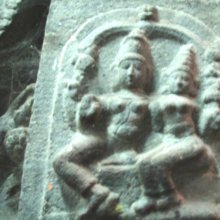 Himavat (हिमवत्) is the name of a mountain (range), hosting the great peak known as Kailāsa. It is mentioned in the Kathāsaritsāgara, chapter 1, written by Somadeva in the 11th-century. Accordingly, “there is a mountain celebrated under the name of Himavat, haunted by Kinnaras, Gandharvas, and Vidyādharas, a very monarch of mighty hills, whose glory has attained such an eminence among mountains that Bhavānī, the mother of the three worlds, deigned to become his daughter; the northernmost summit thereof is a great peak named Kailāsa, which towers many thousand yojanas in the air...”

In chapter 35, Himavat is described as a sacred mountain having many peaks, one of which is the mount of Śiva. Accordingly, “there is a mountain-chain called Himavat, famous in the three worlds; it has many peaks, but one of its peaks is the mount of Śiva, which is garlanded with the brightness of glittering jewels, and flashes with gleaming snow, and, like the expanse of the heaven, cannot be measured. Its plateaux are the home of magic powers and of magic herbs, which dispel old age, death and fear, and are to be obtained by the favour of Śiva. With its peaks yellow with the brightness of the bodies of many Vidyādharas, it [Himavat] transcends the glory of the peaks of Sumeru itself, the mighty hill of the immortals”.

Himavat according to the sixteenth story of the Vetālapañcaviṃśati in the Kathāsaritsāgara, chapter 90: “... there is in this earth a great mountain named Himavat, where all jewels are found, which is the origin of both Gaurī and Gaṅgā, the two goddesses dear to Śiva. Even heroes cannot reach its top; it towers proudly above all other mountains; and as such its praises are sung in strains of sooth in the three worlds. On the ridge of that Himavat there is that city rightly named the Golden City (kāñcanapura), which gleams like a mass of the sun’s rays deposited by him on earth”.

The Kathāsaritsāgara (‘ocean of streams of story’), mentioning Himavat, is a famous Sanskrit epic story revolving around prince Naravāhanadatta and his quest to become the emperor of the vidyādharas (celestial beings). The work is said to have been an adaptation of Guṇāḍhya’s Bṛhatkathā consisting of 100,000 verses, which in turn is part of a larger work containing 700,000 verses.

Himavat (हिमवत्) is the name of a mountain-range situated to the south of Hari, according to the Parākhyatantra 5.76. Hari is a region (navakhaṇḍa) situated within Jambūdvīpa: one of the seven continents situated within the world of the earth (pṛthivī). These continents are located above the seven pātālas and may contain even more sub-continents within them, are round in shape, and are encircled within seven concentric oceans.

According to the Parākhyatantra, “and further south from that is the mountain Himavat, like the Hemakūṭa. Although it too is rich with jewels, it has a great deal of snow (himaprāya), and therefore it is called the Himavat mountain”.

Himavat (हिमवत्) or Himācala is represented in two forms (1) the mobile (the subtle human form) and (2) immobile (the gross, stationary form identical with the mountain Himālayas), according to the Śivapurāṇa 2.3.1.

Accordingly, as Brahmā narrated to Nārada:—

“[...] there in the northern region is a mountain called Himavat who is the lord of mountains and has great splendour and prosperity. His twofold aspects—that of a mobile nature and that of the immobile one—are well known. I succinctly describe his subtle form. He is beautiful and is the storehouse of multifarious gems. Extending from the eastern to the western ocean he appears like a measuring rod of the Earth.

[...] He (i.e., Himavat) is of a divine form. He is beautiful in every part. He is the unaffected part of Viṣṇu. He is the king of leading mountains and a great favourite of the good. Due to the desire for the benefit of the manes and the gods and for the stabilisation of his race as well as for the increase of virtue, Himācala wanted to marry”.

Himavat (हिमवत्) is the father of Kālī who married Śiva, according to the 10th century Saurapurāṇa: one of the various Upapurāṇas depicting Śaivism.—Accordingly, Satī’s rebirth as Kālī, the daughter of Himavat, her penance for getting Śiva as her husband, the appointment of Madana (Kāma) by the gods to create passion in diva’s mind, the burning of Madana to ashes, Kālī’s eulogy of Śiva so that the latter is pleased to grant the desired boon and revive, Kāma in a formless state (anaṅga), Kālī’s description of the knowledge of Māheśvara to father, Himavat, arrangement for the marriage of Śiva and Kālī; the description of marriage maṇḍapa, Kālī’s marriage with Śiva, the birth of Skanda, Skanda’s fight with Indra and his appointment as the commander in chief of the army of Gods; the killing of Tārakāsura—are described in chapters fifty-three to sixty-three.

Himavat (हिमवत्) is another name for the Himalayas (mountains), as mentioned in verse 5.8-9 of the Aṣṭāṅgahṛdayasaṃhitā (Sūtrasthāna) by Vāgbhaṭa.—Accordingly, “[...] (Those) [rivers, viz., nadī] springing from the Himavat and the Malaya, which hold water retarded by its bounding against rocks and its (consequent) dashing down and bursting asunder, (are) salutary; those, however, (which are) stagnant produce worms, elephantiasis, and diseases of the stomach, throat, and head; [...]”.

Himavat (हिमवत्) refers to one of the thirteen places (sthāna) associated with the Goddess’ pilgrimage, according to the Ṣaṭsāhasrasaṃhitā (verse 1.36-37, 4.5, 4.26-132), which is an expansion of the Kubjikāmatatantra: the earliest popular and most authoritative Tantra of the Kubjikā cult.

Himavat (हिमवत्) [=Himavān] or Himavadgiri refers to a mountain belonging to “Uttaratas or Uttaradeśa (northern division)” classified under the constellations of Śatabhiṣaj, Pūrvabhādrapada and Uttarabhādrapada, according to the system of Kūrmavibhāga, according to the Bṛhatsaṃhitā (chapter 14), an encyclopedic Sanskrit work written by Varāhamihira mainly focusing on the science of ancient Indian astronomy astronomy (Jyotiṣa).—Accordingly, “The countries of the Earth beginning from the centre of Bhāratavarṣa and going round the east, south-east, south, etc., are divided into 9 divisions corresponding to the 27 lunar asterisms at the rate of 3 for each division and beginning from Kṛttikā. The constellations of Śatabhiṣaj, Pūrvabhādrapada and Uttarabhādrapada represent the northern division consisting of [i.e., Himavat] [...]”.

Himavat (हिमवत्) (or Kṣudrahimavat) refers to one of the seven mountain ranges of Jambūdvīpa which is situated in the “middle world” (madhyaloka), according to chapter 2.2 [ajitanātha-caritra] of Hemacandra’s 11th century Triṣaṣṭiśalākāpuruṣacaritra (“lives of the 63 illustrious persons”): a Sanskrit epic poem narrating the history and legends of sixty-three important persons in Jainism.

Himavat (हिमवत्) or Himavān is the name of a mountain in Jambūdvīpa separating the regions Bharata and Haimavata. Jambūdvīpa refers to the first continent of the Madhya-loka (middle-word), according to the 2nd-century Tattvārthasūtra 3.10. The hues of the six mountains (e.g., Himavān and Mahāhimavān) are golden and silver respectively. Why do the mountains Himavān and Mahāhimavān have their specific hues? They have the hues as the sand and stones which constitute these mountains and are golden and silvery in colours respectively.

Himavat (हिमवत्).—The varṣaparvata Himavat is also mentioned in the Nasik Praśasti, which speaks of its might. The great height of its peak is referred to in the Uttara-Kāśī inscription of Guha. Some of the inscriptions mention the association of this mountain with theriver Gaṅgā. Mandsaur Stone Tillar inscription of Yaśodharman describes it as tuhina-śikharin (i.e., the mountain of snow), the table lands of which are embraced by the river Gaṅgā. Another Mandsaur inscription says that the torrent flowing high and low of the river Gaṅgā spreads abroad from the mountain Himavat. Similarly, in Ganjam Plates of Śaśāṅka-rāja, the streams of surasarit (Gaṅgā) are described as the split up and dashed outside by many masses of rocks at her fall on the top of the Himālayas.

The tuhinaśikharin, himagiri, kṣitidhara, durga, śailendra, and girivara are the different names and attributes used for the mighty Himavat mountain by the authors of various inscriptions.

The Himavat range is said to have stretched along, on the north of Bhārata, like the string of a bow. The similie, which refers to a drawn bow with the string angular in the middle, implies that the name Himavat was applied to the entire mountain range that stretches from the Sulaiman along the West of Punjab and whole of tbe northern boundary of India to the Assam and Arakan hill in the east including a number of peaks and smaller mountain ranges.

2) [v.s. ...] exposing one’s self to coldness or enduring it, [Baudhāyana-dharma-śāstra]

Search found 40 books and stories containing Himavat, Hima-vat; (plurals include: Himavats, vats). You can also click to the full overview containing English textual excerpts. Below are direct links for the most relevant articles:

Part 23: Description of Jambūdvīpa < [Chapter III - The initiation and omniscience of Ajita]