Hasti means something in Buddhism, Pali, Hinduism, Sanskrit, Jainism, Prakrit, Marathi, Hindi. If you want to know the exact meaning, history, etymology or English translation of this term then check out the descriptions on this page. Add your comment or reference to a book if you want to contribute to this summary article. 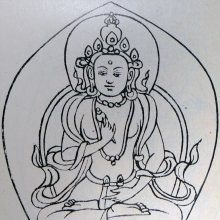 2) Hasti (हस्ति).—Another king of the lunar dynasty. His father was Suhotra and mother Suvarṇā, who belonged to the Ikṣvāku dynasty. This Hasti married Yaśodharā, daughter of King Trigarta, and a son called Vikaṇṭha was born to them. Hastināpura was the city newly built by Hasti. (Ādi Parva Chapter 95, Verse 34).

Hastī (हस्ती) is a name mentioned in the Mahābhārata (cf. I.89.51) and represents one of the many proper names used for people and places. Note: The Mahābhārata (mentioning Hastī) is a Sanskrit epic poem consisting of 100,000 ślokas (metrical verses) and is over 2000 years old.

[«previous (H) next»] — Hasti in Mahayana glossary
Source: academia.edu: A Study and Translation of the Gaganagañjaparipṛcchā

Hasti (हस्ति) refers to the “elephants”, according to the Vajratuṇḍasamayakalparāja, an ancient Buddhist ritual manual on agriculture from the 5th-century (or earlier), containing various instructions for the Sangha to provide agriculture-related services to laypeople including rain-making, weather control and crop protection.—Accordingly, [when the Bhagavān reached the vicinity of the residence of Vaiśravaṇa], “[...] All people, women, men, boys and girls, cattle, horses, mares, buffaloes, elephants (hasti), camels, donkeys and so on became delighted by comfort. That lotus lake had an expansion of two yojanas and [a depth of] a fathom all around in the four directions. [...]”

Hasti (हस्ति, “elephant”) or Hastiratna refers to the “horse jewel” and represents the third of the “seven jewels of universal monarchs” (saptaratna) as defined in the Dharma-saṃgraha (section 85). The Dharma-samgraha (Dharmasangraha) is an extensive glossary of Buddhist technical terms in Sanskrit (e.g., hasti). The work is attributed to Nagarjuna who lived around the 2nd century A.D.

Hastī (हस्ती):—(nf) existence, being; worth; personage; (nm) an elephant; —[khonā] to lose existence; —[miṭanā] to be ruined, to be forced out of existence; —[honā] to be existent; to be worth reckoning.

1) [noun] that which has a trunk (the long, flexible snout); an elephant.

2) [noun] (fig.) that which is characterised by or known for its, hugeness, immensity, gigantism, etc.

Search found 49 books and stories containing Hasti, Hastī; (plurals include: Hastis, Hastīs). You can also click to the full overview containing English textual excerpts. Below are direct links for the most relevant articles:

Chapter 67 - On the features of the Elephant (hasti-lakṣaṇa)

Chapter 29 - On flowers and plants (kusumalatā)