Haritala means something in Buddhism, Pali, Hinduism, Sanskrit, Jainism, Prakrit, Marathi. If you want to know the exact meaning, history, etymology or English translation of this term then check out the descriptions on this page. Add your comment or reference to a book if you want to contribute to this summary article.

Haritāla (हरिताल) is a Sanskrit technical term translating to “orpiment”, which is an orange-yellow colored mineral found in volcanic fumaroles. It is used throughout Ayurvedic literature such as the Caraka-saṃhitā and Suśruta-saṃhitā. It is also known by the name Tālaka.

Haritāla (हरिताल) refers to a “dark-brown” substance, according to the Brahmayāmala verse 32.52-54.—Accordingly, “I will explain the lower form of Māyā, which is Mālinī. She possesses countless cavities and is (dark brown) like haritāla, a cloud or mud [i.e., haritāla-abhra-paṅkavat]. She is the supreme Vidyā and her form is like a beehive. She is the colour of a red lotus and is beautiful in all the directions of space. She pervades with (her) great vitality all that is made of Speech”.

Haritāla (हरिताल) refers to “yellow orpiment”, according to the Netratantra of Kṣemarāja: a Śaiva text from the 9th century in which Śiva (Bhairava) teaches Pārvatī topics such as metaphysics, cosmology, and soteriology.—Accordingly, [verse 10.7cd-17ab, while describing the worship of Bhairavī and Bhairava]—“[...] One meditates on [Bhairava] as having equal radiance to snow, jasmine, the moon, or pearls. [...] He is] equal in radiance to yellow orpiment (haritāla-samadyuti). The Sādhaka remembers Deva, who has the form of icchā, with whatever beautiful [form of the deity the Sādhaka chooses]. [Thus, the Deva] gives [the Sādhaka] the fruits of icchāsiddhi. Any one [of the deity's] forms bestows, any one beautiful [form] grants siddhis. [...]”.

Haritāla (हरिताल) refers to “orpiment” (suitable for an offering ceremony), according to the Vajratuṇḍasamayakalparāja, an ancient Buddhist ritual manual on agriculture from the 5th-century (or earlier), containing various instructions for the Sangha to provide agriculture-related services to laypeople including rain-making, weather control and crop protection.—Accordingly [as the Bhagavān taught the detailed offering-manual], “The wise one should prepare a pill having mixed padmaka, arka, blue lotus, orpiment (haritāla), mixed copper powder, mustard seed, indrahasta and palāśa with sugar juice. Having enchanted with the mantra eighty times, pills measuring a jujube fruit should be made. [...]”.

Haritāla (हरिताल) refers to “orpiment”: a mineral that was typically mined, extracted and used (both domestic and industrial) in ancient India. Mining was an important industry at that time as well. The Jaina canonical texts mention about the extraction of various kinds of minerals, metals and precious stones. The term ‘āgara’ occurring intire texts denotes the mines which provided many kinds of mineral products (e.g., haritāla). The references in the texts of various professions and trade in metallic commodities clearly show a highly developed industry of mining and metallurgy in that period.

Note: haritāla is a Pali compound consisting of the words hari and tāla.

Haritāla (हरिताल).—(by some regarded as derived from harita) a kind of yellow-coloured pigeon.

Haritāla is a Sanskrit compound consisting of the terms hari and tāla (ताल).

2) [from hari] n. yellow orpiment or sulphuret of arsenic (described as the seed or seminal energy of Viṣṇu = harer vīryam), [Mahābhārata; Harivaṃśa etc.]

1) [noun] arsenic trisulfide, As2S3, having a lemon-yellow colour and a resinous lustre which is used as a pigment; orpiment.

5. The Viṣṇudharmottara-purāṇa and the Modern Paintings < [Chapter 6 - Modern Relevance of Different Art Forms and Architecture]

Earth and its aspects < [Chapter 5 - Aspects of Nature] 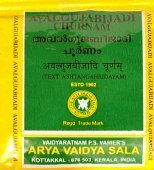