Hanti means something in Hinduism, Sanskrit, Buddhism, Pali. If you want to know the exact meaning, history, etymology or English translation of this term then check out the descriptions on this page. Add your comment or reference to a book if you want to contribute to this summary article. 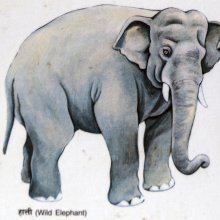 1) [noun] a number of people or things arranged so as to form a line; a row; a file.

2) [noun] people sitting down in a row taking meals.

4) [noun] the act of succeeding or coming after another in order or sequence; succession.

5) [noun] any of a series of such horizontal lines in parallel, as of seats in a theater or airplane, corn in a field, etc.

6) [noun] a row of written or printed characters extending across or part way across a page; a line.

7) [noun] a number of cattle tied one by the side of the other, that are made to go round and round a pole on the threshed crops (as paddy) to separate remaining grains.

Search found 32 books and stories containing Hanti, Hamti, Haṃti; (plurals include: Hantis, Hamtis, Haṃtis). You can also click to the full overview containing English textual excerpts. Below are direct links for the most relevant articles:

Verse 2.19 < [Chapter 2 - Sāṅkhya-yoga (Yoga through distinguishing the Soul from the Body)]

Verse 2.21 < [Chapter 2 - Sāṅkhya-yoga (Yoga through distinguishing the Soul from the Body)]