Ghanta means something in Buddhism, Pali, Hinduism, Sanskrit, Marathi, Jainism, Prakrit, Hindi. If you want to know the exact meaning, history, etymology or English translation of this term then check out the descriptions on this page. Add your comment or reference to a book if you want to contribute to this summary article. 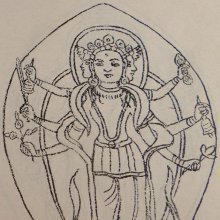 Ghaṇṭā (घण्टा)—One of the Heavenly ornaments according to the Vāyu Purāṇa. (It is not certain whether it was an ornament) Śiva is often associated with its use. He loved a garland of bells. He is called ghaṇṭā-priya and ghaṇṭīka.

1) Ghaṇṭa (घण्ट).—A brahmin born in Vasiṣṭha’s family. He spent hundred years worshipping Śiva. Once Ghaṇṭa asked sage Devala to give his daughter in marriage to him. But Ghaṇṭa’s ugliness stood in the way. So he abducted the daughter of the sage and married her. Enraged at this Devala cursed and turned him into an owl. He was also given redemption from the curse that he would regain his form the day he helped Indradyumna. (Skanda Purāṇa).

Ghaṇṭā (घण्टा, “shining, splendid”):—Name of one of the sixty-four mātṛs to be worshipped during Āvaraṇapūjā (“Worship of the Circuit of Goddesses”, or “Durgā’s Retinue”), according to the Durgāpūjātattva. They should be worshipped with either the five upācāras or perfume and flowers.

Ghaṇṭā (घण्टा) is the name of a Mātṛkā-Śakti created by Mahārudra in order to control the plague of demons created by Andhakāsura.—Accordingly, Andhaka-Asura tried to kidnap Umā (Devī Pārvatī), and was fiercely attacked by Mahārudra who shot arrows at him from his mahāpināka. when the arrows pierced the body of Andhakāsura, drops of blood fell to earth and from those drops, thousands of Andhakas arose. To control this plague of demons, Mahārudra created Mātṛkā-Śaktis [viz., Ghaṇṭā] and ordered them to drink the blood of the demons and drain them dry.

Ghaṇṭā (घण्टा) refers to one of the various Mātṛkā-Śaktis created by Rudra in order to destroy the clones that spawned from Andhaka’s body.—Accordingly, [...] Andhakāsura attempted to abduct Girājanandinī (Pārvatī) and thus ensued a fierce battle between Andhakāsura and the great Rudra, the Lord of Umā. Like raktabīja, every drop of blood that fell from the body of Andhaka created another Asura like him and in no time, the entire world was filled with Andhakas. To destroy the growing number of Andhakas, Rudra created innumerable Mātṛkā-Śaktis [viz., Ghaṇṭā]. These Śaktis of immense power at once began to drink every drop of blood that flowed from the body of Andhaka, but they could still not effectively contain the emergence of more and more demons.

Ghaṇṭā (घण्टा):—Sanskrit name of one of the thirty-two female deities of the Somamaṇḍala (second maṇḍala of the Khecarīcakra) according to the kubjikāmata-tantra. These goddesses are situated on a ring of sixteen petals and represent the thirty-two syllables of the Aghoramantra. Each deity (including Ghaṇṭā) is small, plump and large-bellied. They can assume any form at will, have sixteen arms each, and are all mounted on a different animal.

Source: academia.edu: The Yoga of the Mālinīvijayottaratantra

Ghaṇṭa (घण्ट) refers to one of the ten kinds of sounds (śabda) according to the Matsyendrasaṃhitā.

Ghaṇṭā (or, the bell) is another musical instrument, which is generally found in the hands of Vīrabhadra and Kālī.

Ghaṇṭā (Bell) - Impermanence. The phenomenal world which is impermanent and evanescent. Creation of the transient universe through sound — being perceived but not held and kept.

1) Ghaṇṭā (घण्टा, “bell”) refers to a type of musical instrument, representing one of the several “attributes” (āyudha) or “accessories” of a detiy commonly seen depicted in Hindu iconography, defined according to texts dealing with śilpa (arts and crafs), known as śilpaśāstras.—Ghaṇṭā or the bell is another musical instrument, which is generally found in the hands of Vīrabhadra and Kālī.

2) Ghaṇṭā (घण्टा) is the name of a Ḍākinī who, together with the Vīra (hero) named Ghaṇṭa forms one of the 36 pairs situated in the Ākāśacakra, according to the 10th century Ḍākārṇava chapter 15. Accordingly, the ākāśacakra refers to one of the three divisions of the dharma-puṭa (‘dharma layer’), situated in the Herukamaṇḍala. The 36 pairs of Ḍākinīs [viz., Ghaṇṭā] and Vīras are dark blue in color; they each have one face and four arms; they hold a skull bowl, a skull staff, a small drum, and a knife. Alternatively, the Ḍākinīs have their own marks and motions according to the taste instead of a small drum and a skull staff.

Ghaṇṭa (घण्ट) is the name of a Dānava, according to the Kathāsaritsāgara, chapter 121. Accordingly, “... long ago there came to impede Prajāpati, in his creation of creatures, two terrible Dānavas, named Ghaṇṭa and Nighaṇṭa, invincible even by gods. And the Creator, being desirous of destroying them, created these two maidens, the splendour of whose measureless beauty seemed capable of maddening the world”.

The Kathāsaritsāgara (‘ocean of streams of story’), mentioning Ghaṇṭa, is a famous Sanskrit epic story revolving around prince Naravāhanadatta and his quest to become the emperor of the vidyādharas (celestial beings). The work is said to have been an adaptation of Guṇāḍhya’s Bṛhatkathā consisting of 100,000 verses, which in turn is part of a larger work containing 700,000 verses.

Ghaṇṭā (घण्टा) is another name for Atibalā, a medicinal plant identified with Abutilon indicum Linn. (“Indian mallow”) from the Malvaceae or mallows family of flowering plants, according to verse 4.101-102 of the 13th-century Raj Nighantu or Rājanighaṇṭu. The fourth chapter (śatāhvādi-varga) of this book enumerates eighty varieties of small plants (pṛthu-kṣupa). Together with the names Ghaṇṭā and Atibalā, there are a total of ten Sanskrit synonyms identified for this plant.

Ghaṇṭā (घण्टा) is the name of Dūtī (i.e., messengers of Lord Vajrapāṇi) mentioned as attending the teachings in the 6th century Mañjuśrīmūlakalpa: one of the largest Kriyā Tantras devoted to Mañjuśrī (the Bodhisattva of wisdom) representing an encyclopedia of knowledge primarily concerned with ritualistic elements in Buddhism. The teachings in this text originate from Mañjuśrī and were taught to and by Buddha Śākyamuni in the presence of a large audience (including Ghaṇṭā).

1) Ghaṇṭā (घण्टा) refers to a “bell” and represents one of the items held in the left hand of Heruka: one of the main deities of the Herukamaṇḍala described in the 10th century Ḍākārṇava chapter 15. Heruka is positioned in the Lotus (padma) at the center; He is the origin of all heroes; He has 17 faces (with three eyes on each) and 76 arms [holding, for example, ghaṇṭā]; He is half black and half green in color; He is dancing on a flaming sun placed on Bhairava and Kālarātrī.

2) Ghaṇṭā (घण्टा) is the name of a Ḍākinī who, together with the Vīra (hero) named Ghaṇṭa forms one of the 36 pairs situated in the Ākāśacakra, according to the same work. Accordingly, the ākāśacakra refers to one of the three divisions of the dharma-puṭa (‘dharma layer’), situated in the Herukamaṇḍala. The 36 pairs of Ḍākinīs [viz., Ghaṇṭā] and Vīras are dark blue in color; they each have one face and four arms; they hold a skull bowl, a skull staff, a small drum, and a knife. Alternatively, the Ḍākinīs have their own marks and motions according to the taste instead of a small drum and a skull staff.

ghaṇṭā (घंटा).—f (S) A bell: also a plate of iron or mixed metal struck as a bell, or in telling the hours. ghaṇṭā vājaṇēṃ g. of s. Also ghaṇṭā hālaṇēṃ To be exhausted, spent, consumed; to be out or clean gone.

2) A plate of iron or mixed metal struck as a clock.

(-ṇṭaḥ) A sort of sauce, vegetables made into a pulp with water, turmeric, mustard seeds and capsicums. f.

2) a kind of dish (sort of sauce, vegetables made into a pulp and mixed with turmeric and mustard seeds and capsicums; cf. matsya-), [Horace H. Wilson]

1) Ghanta in Hindi refers in English to:—(nm) a bell; gong; clock; an hour; ~[ghara] a clock-tower..—ghanta (घंटा) is alternatively transliterated as Ghaṃṭā.

Ghaṃṭa (घंट) in the Prakrit language is related to the Sanskrit word: Ghaṇṭa.