Ganadhara means something in Jainism, Prakrit, Hinduism, Sanskrit, the history of ancient India. If you want to know the exact meaning, history, etymology or English translation of this term then check out the descriptions on this page. Add your comment or reference to a book if you want to contribute to this summary article. 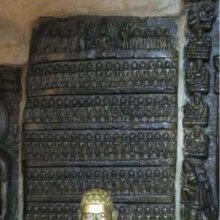 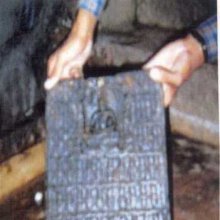 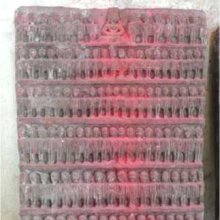 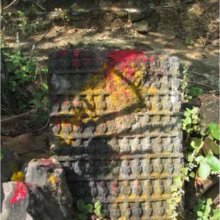 Gaṇadhara (गणधर) refers the “attendants of a Tīrthaṃkaras” commonly found in Jaina iconography.—Another feature of the Jina icon is the presence of Gaṇadharas just to the right and left of the main figure. Jaina texts (specially of iconography) mention them as attendants of a Tīrthaṃkara. Such figures are represented as holding some Chowris, one of them might be shown with its hands elapsed in adoration.Though Yakṣa figures arc absent from the early Jina images of Mathura, Gaṇadhara figures are prominent by their presence in many of these images.

Gaṇadhara (गणधर) refers to a “group-leader”, a primary disciple of a Tīrthaṅkara.—Śramaṇa Lord Mahāvīra’s congregation had 11 gaṇadharas. All these were Brahmin householders from different places. On the invitation of Madhyamapāvā’s Somila all these people had come with their respective disciples to attend the sacrificial ritual. Upon attaining pure knowledge Lord Mahāvīra arrived at Pāvāpurī. All these Brahmins attended the Lord’s samavaśaraṇa along with their disciples there and impressed by his knowledge, took initiation along with their respective disciples on the 11th day of the bright fortnight of Vaiśākha month. Attaining the knowledge of the tripadīs they wrote the fourteen pūrvas and became gaṇadharas.

The gaṇadharas of Mahāvīra were:

All these gaṇadharas were Brahmins by caste and Vedic scholars. After taking initiation, they all studied the 11 Aṅgas. Hence, all of them had the knowledge of the 14 pūrvas and possessed special attainments (labdhis).

Gaṇadhara (गणधर) refers to one “in charge of the troops” (i.e., a title given to the disciples to whom Mahāvīra had entrusted the charge of the troops), and represents a Jaina technical term mentioned in the mentioned in the Vividhatīrthakalpa by Jinaprabhasūri (13th century A.D.): an ancient text devoted to various Jaina holy places (tīrthas).—The Gaṇadhara is in charge of the education of nuns and by extension that of monks. The title is often interchanged with that of Ācārya “master” (Caillat 1965 p. 65).

Gaṇadhara.—(HA), chief disciple of a Jina. Note: gaṇadhara is defined in the “Indian epigraphical glossary” as it can be found on ancient inscriptions commonly written in Sanskrit, Prakrit or Dravidian languages.

2) the teacher of a school.

Gaṇadhara is a Sanskrit compound consisting of the terms gaṇa and dhara (धर).

(-raḥ) 1. The head of a class or number, the teacher of a school. 2. A title of the first diciples of the Jaina Mahavira. E. gaṇa a class, and dhara who holds.

Gaṇadhara (ಗಣಧರ):—[noun] (Jain.) a student who has accurate knowledge of Jaina philosophy.

Search found 7 books and stories containing Ganadhara, Gaṇadhara, Gana-dhara, Gaṇa-dhara; (plurals include: Ganadharas, Gaṇadharas, dharas). You can also click to the full overview containing English textual excerpts. Below are direct links for the most relevant articles:

Part 15: The foundation of the tīrtha < [Chapter III]

Kalpa-sutra (Lives of the Jinas) (by Hermann Jacobi)