Elapatra means something in Buddhism, Pali, Hinduism, Sanskrit. If you want to know the exact meaning, history, etymology or English translation of this term then check out the descriptions on this page. Add your comment or reference to a book if you want to contribute to this summary article. 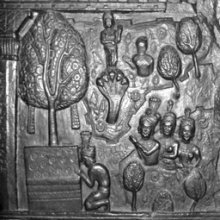 Elapatra (एलपत्र) is the name of a yakṣa of olden times subdued by the Buddha mentioned in order to demonstrate the fearlessness of the Buddha according to the 2nd century Mahāprajñāpāramitāśāstra chapter XL.1.4. Accordingly, “Great yakṣas such as Yi-lo-po-to-lo (Elapatra), etc., submitted and took refuge in him”.

(-traḥ) One of the chiefs of the Nagas or serpent-race.

Search found 17 books and stories containing Elapatra, Elāpatra, Ela-patra, Elā-patra; (plurals include: Elapatras, Elāpatras, patras). You can also click to the full overview containing English textual excerpts. Below are direct links for the most relevant articles:

IV. How do we know that the Buddha is fearless? < [Part 1 - The four fearlessnesses of the Buddha according to the Abhidharma]