Divya means something in Buddhism, Pali, Hinduism, Sanskrit, Jainism, Prakrit, the history of ancient India, Marathi, Hindi. If you want to know the exact meaning, history, etymology or English translation of this term then check out the descriptions on this page. Add your comment or reference to a book if you want to contribute to this summary article. 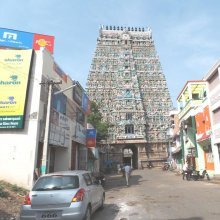 Divya (दिव्य) refers to the first group of the Pāñcarātra classifications of Vaiṣṇavāgamas: one of the three classes of āgamas (traditionally communicated wisdom).—Texts of the Pāñcara Āgamas are divided in to two sects. It is believed that Lord Vāsudeva revealed the first group of texts which are called Divya and the next group is called Muniprokta.

Divya (दिव्य) refers to “rain-water” or “celestial (water)”, mentioned in verse 3.46 and 5.7 of the Aṣṭāṅgahṛdayasaṃhitā (Sūtrasthāna) by Vāgbhaṭa.—Accordingly, “[...] as the (humours and the gastric fire) irritate one another this way, one shall turn to all (substances) that (are) applicable to all humours and promotive of the (gastric) fire: [...] whey richly mixed with sochal salt or besprinkled with powder of the five spices, rain-water [viz., divya], well-water, and boiled water; in very bad weather, however, food”.

1) Divyā (दिव्या) is another name for Vandhyākarkoṭakī, a medicinal plant identified with Momordica dioica (spiny gourd) from the Cucurbitaceae or “gourd family” of flowering plants, according to verse 3.61-63 of the 13th-century Raj Nighantu or Rājanighaṇṭu. The third chapter (guḍūcyādi-varga) of this book contains climbers and creepers (vīrudh). Together with the names Divyā and Vandhyākarkoṭakī, there are a total of nineteen Sanskrit synonyms identified for this plant.

2) Divyā (दिव्या) is also mentioned as a synonym for Mahāmedā, an unidentified medicinal plant, according to verse 5.25-27. The fifth chapter (parpaṭādi-varga) of this book enumerates sixty varieties of smaller plants (kṣudra-kṣupa). Together with the names Divyā and Mahāmedā, there are a total of eleven Sanskrit synonyms identified for this plant.

3) Divyā (दिव्या) is also mentioned as a synonym for Brāhmī, a medicinal plant identified with two possibly species verse, according to verse 5.63-66. Together with the names Suvarcalā and Brāhmī, there are a total of twenty-four Sanskrit synonyms identified for this plant. Note: Chopra identifies Brāhmī with 1) Centella asiatica (Linn.) Urban. while Bāpālāl and Th. B.S. et al identify it with 2) Bacopa monnieri (Linn.) Pennell.

1) Divya (दिव्य) refers to a type of spirituous liquor, according to the Vālmīkirāmāyaṇa Sundarakāṇḍa 11.22, and is commonly found in literature dealing with the topics of dietetics and culinary art, also known as Pākaśāstra or Pākakalā.—Vālmīkirāmāyaṇa mentions two varieties of suras ie. surā and kṛtasurā (ordinary one and the fermented one), four varieties of āsavas (spirituous liquor) such as puṣpāsava, phalāsava, madhvāsava and śarkarāsava and two more varieties such as divya and prasanna.

2) Divya (दिव्य) or Divyajala refers to “rain water” and is mentioned as being beneficial (hita) to the body according to the 17th century Bhojanakutūhala (dravyaguṇāguṇa-kathana), and is commonly found in literature dealing with the topics of dietetics and culinary art, also known as Pākaśāstra or Pākakalā.—The dravyaguṇāguṇa section contains the discussions on different food articles and their dietetic effects according to the prominent Ayurvedic treatises. Here In the jala (water) group divya (rain water) is mentioned as beneficial to the body (hita).

Divya (दिव्य) refers to “icons in places installed by divinities”, as defined in treatises such as the Pāñcarātra, Pādmasaṃhitā and Vaikhānasa-āgamas, extensively dealing with the technical features of temple art, iconography and architecture in Vaishnavism.—As far as the Jīrṇoddhāraṇa (renovation) metal icons are concerned, the Vaiṣṇava Āgamas lay special rules because the authors of the Āgamas obviously knew the value and re-usable condition of metals. [...] Some special rules are prescribed in the Vaiṣṇava Āgamas regarding the jīrṇoddhāraṇa of the metal icons installed in the places generally known as svayaṃvyakta (self-emanated), divya (installed by divinities), saiddha (installed by Siddhas) and ārsa (installed by Ṛṣis). In the renovation process, the permission to correct the characteristics (lakṣaṇa) of the icon is not admissible in these aforesaid places. The measurements and characteristics less or more, the same material is to be retained as it were. [...]

Divya (दिव्य, “celestial”).—According to the 2nd century Mahāprajñāpāramitāśāstra (chapter XIV), it is customary in India to call celestial (divya) anything that is beautiful. Even though the flowers of the manuṣya and amanuṣya do not come from the heavens, they can, nevertheless, be described as ‘celestial’ because of their beauty.

Divya or Divyacakṣus refers to one the “five eyes” (cakṣus) as defined in the Dharma-saṃgraha (section 65).

Divya (दिव्य) is the name of a Tathāgata (Buddha) mentioned as attending the teachings in the 6th century Mañjuśrīmūlakalpa: one of the largest Kriyā Tantras devoted to Mañjuśrī (the Bodhisattva of wisdom) representing an encyclopedia of knowledge primarily concerned with ritualistic elements in Buddhism. The teachings in this text originate from Mañjuśrī and were taught to and by Buddha Śākyamuni in the presence of a large audience (including Divya).

Divyā (दिव्या) is the name of an Apsaras, instructed by Śakra to help in the preparations of Ṛṣabha’s wedding-preparations, according to chapter 1.2 [ādīśvara-caritra] of Hemacandra’s 11th century Triṣaṣṭiśalākāpuruṣacaritra (“lives of the 63 illustrious persons”): a Sanskrit epic poem narrating the history and legends of sixty-three important persons in Jainism.

“[...] Then having ascertained the Lord’s purpose, Purandara at once summoned gods for the tasks of the wedding-preparations.—‘[...] Why do you joke idly, Divyā? Time for the ceremony is near. Then with all your heart hurry, each one of you, to your wedding-task that must be done? [...]’. From the bustling of the Apsarases instructing each other in this way, and frequently calling names, a mighty tumult arose”.

Divya.—(IA 10; LP), an ordeal; same as parīkṣā. Note: divya is defined in the “Indian epigraphical glossary” as it can be found on ancient inscriptions commonly written in Sanskrit, Prakrit or Dravidian languages.

4) An oath, a solemn declaration.

Divya (दिव्य) in the Sanskrit language is related to the Prakrit word: Divva.

4) [adjective] being, born or happened in the sky; celestial.

1) [noun] that which is noble, sublime or majestic.

3) [noun] a phenomenal thing or event.

6) [noun] any of several ancient methods of trial in which the accuse was exposed to physical dangers, through which he or she was supposed to pass through unscathed if innocent; an ordeal.

8) [noun] name of one of the six class of Śaiva scriptures.

Search found 55 books and stories containing Divya, Divyā; (plurals include: Divyas, Divyās). You can also click to the full overview containing English textual excerpts. Below are direct links for the most relevant articles:

Chapter 3.5a - Legal Privilege and Disabilities of women < [Chapter 3 - The Social Aspect Depicted in the Vyavahārādhyāya]

Verse 10.19 < [Chapter 10 - Vibhūti-yoga (appreciating the opulences of the Supreme Lord)]

Verse 10.16 < [Chapter 10 - Vibhūti-yoga (appreciating the opulences of the Supreme Lord)]