Dish means something in Buddhism, Pali, Hinduism, Sanskrit, Jainism, Prakrit, the history of ancient India. If you want to know the exact meaning, history, etymology or English translation of this term then check out the descriptions on this page. Add your comment or reference to a book if you want to contribute to this summary article.

The Sanskrit term Diś can be transliterated into English as Dis or Dish, using the IAST transliteration scheme (?). 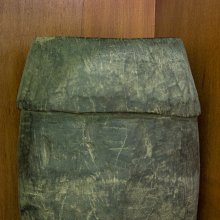 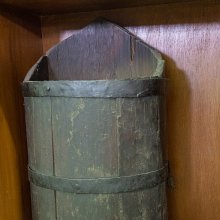 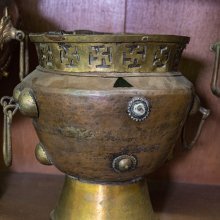 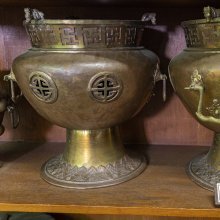 Diś (दिश्) refers to the “direction” (of the planets), according to the Bṛhatsaṃhitā (chapter 2), an encyclopedic Sanskrit work written by Varāhamihira mainly focusing on the science of ancient Indian astronomy astronomy (Jyotiṣa).—Accordingly, “And in horoscopy, the Jyotiṣaka must know such divisions of space as rāśi (a sign of Zodiac or a space of 30°), horā (15° or half a sign), drekkana (10° or one third of a sign), navāṃśaka (3° 20' or one-ninth of a sign), dvādaśāṃśaka (2° 30' or one twelfth of a sign), triṃśāṃśaka (one-thirtieth of a sign), and their strength or weakness considered horoscopically; he must know the horoscopic strength of the planets with respect to their Dik (direction), Sthāna (place), Kāla, (time) Ceṭā (motions, conjunctions and the like)”.

Diś (दिश्) refers to “directions”, according to Kāśīnātha Upādhye’s Dharmasindhu, a commentary on the Rāma Daivajña’s Muhūrtacintāmaṇi (an astrological work).—Accordingly, “[...] The water clock [i.e., ghaṭīyantra], thus calibrated, should be placed in a copper basin or clay basin, full of water, when half of the Sun’s orb has risen or set. There this sacred formula is recited. ‘You have been created long time ago by Brahmā as the foremost among the [time measuring] instruments. For the sake of the state of [their] becoming a married couple you be the means of measuring time’. With this sacred formula, preceded by the worship of Gaṇeśa and Varuṇa, the bowl should be placed [on the water in the basin]. If the bowl thus placed moves to the south-east, south, south-west, or north-west of the basin, it is not auspicious. If it stays in the middle, or moves to other directions, it is auspicious. Likewise, if it fills [and sinks] in the five directions [i.e., pañca-diś] starting from the southeast, it is not auspicious. Thus the discussion of the water clock. [...]”.

1) Diś (दिश्) (Cf. Dik) represents the number 4 (four) in the “word-numeral system” (bhūtasaṃkhyā), which was used in Sanskrit texts dealing with astronomy, mathematics, metrics, as well as in the dates of inscriptions and manuscripts in ancient Indian literature.—A system of expressing numbers by means of words arranged as in the place-value notation was developed and perfected in India in the early centuries of the Christian era. In this system the numerals [e.g., 4—diś] are expressed by names of things, beings or concepts, which, naturally or in accordance with the teaching of the Śāstras, connote numbers.

[«previous (D) next»] — Dish in Purana glossary
Source: Google Books: Ramopakhyana - The Story of Rama in the Mahabharata

Diś (दिश्) refers to the “directions”, according to the Nīlakaṇṭha’s commentary on the Mahābhārata 3.259.15-16.—Accordingly, (Text)—“[...] But, envious, afterwards they became firmly resolved on spiritual practice. Then they pleased Brahmā with their awful spiritual practice. For a thousand years, the ten-necked (Rāvaṇa) stood on one foot eating only air, amidst five fires, very collected”. (Commentary)—“Four (fires) and one sun in the five directions [i.e., pañcan-diś], thus pañcāgni means situated amidst five fires”.

Diś (दिश्) refers to the “ten directions” according to an appendix included in the 2nd century Mahāprajñāpāramitāśāstra (chapter XIV). It is known in Pali as disā, in Tibetan as phyogs and in Chinese as fang.

The ten directions (diś) are subdivided in the following way:

a) The four directions proper:

c) The two directions above and below (Pāli: paṭidisā):

[«previous (D) next»] — Dish in Jainism glossary
Source: The University of Sydney: A study of the Twelve Reflections

Diś (दिश्) refers to the “quarters”, according to the 11th century Jñānārṇava, a treatise on Jain Yoga in roughly 2200 Sanskrit verses composed by Śubhacandra.—Accordingly, “Rudra, elephants of the quarters [com.—diś-gaja—‘the elephants of the quarters’], gods, demons, aerial spirits, aquatic predators, the planets, the Vyantaras , the guardians of the quarters of the sky, the enemies [of Vāsudeva], Hari, Bala, the chief of the snakes, the lord of the discus (i.e. Viṣṇu) and others who are powerful, the wind, the sun, etc. all themselves having come together are not able to protect an embodied soul even for an instant [when death is] initiated by the servants of Yama”.

Diś.—(IE 7-1-2), ‘ten’; rarely used to indicate ‘four’ also. Note: diś is defined in the “Indian epigraphical glossary” as it can be found on ancient inscriptions commonly written in Sanskrit, Prakrit or Dravidian languages.

4) A foreign or distant region.

5) A point of view, manner of considering a subject.

—to produce, bring forward (as a witness in a court of justice), [Manu-smṛti viii];

1) Diś (दिश्):—(śa, ña, au) diśati, te 6. c. To shew, to order, to command, to give. With apa to disguise; with ā to order, shew, summons; with ut to proclaim, shew; with upa to advise; with nira to shew, speak aloud; with pra to appoint; with saṃ to exhibit, to inform; with prati and saṃ to send back; with vi and apa to plead in excuse; with vi and nir to declare; with saṃ and ā to allow; with saṃ and upa to point at with the finger.

Diś (दिश्) in the Sanskrit language is related to the Prakrit words: Disa, Disā, Disi, Disī.

Search found 175 books and stories containing Dish, Diś, Dis; (plurals include: Dishes, Diśs, Dises). You can also click to the full overview containing English textual excerpts. Below are direct links for the most relevant articles:

Part 4: Tests of the princes < [Chapter VI - Adoption of right-belief by Śreṇika]

Part 9: Birth of Padma (Rāma) and Lakṣmaṇa < [Chapter IV - The, birth, marriage, and retreat to the forest of Rāma and Lakṣmaṇa]

Organic Khichdi (Dish made of Rice, Pulses and Organic Spices) (Ready to Eat)