Dikshita means something in Hinduism, Sanskrit, the history of ancient India, Marathi, Hindi. If you want to know the exact meaning, history, etymology or English translation of this term then check out the descriptions on this page. Add your comment or reference to a book if you want to contribute to this summary article.

The Sanskrit term Dīkṣita can be transliterated into English as Diksita or Dikshita, using the IAST transliteration scheme (?).

Alternative spellings of this word include Dikshit. 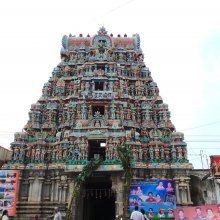 Dīkṣita (दीक्षित) is one who has been consecrated by means of the Dīkṣaṇīya-Iṣṭi. (See the Manubhāṣya verse 4.210)

Dīkṣita (दीक्षित, “prepared”) refers to ‘those who have consecrated themselves’ for some rites or for a Vedic sacrifice, whose mask should be represented as having a shaven head (śiromuṇḍa), according to Nāṭyaśāstra chapter 23. Providing masks is a component of nepathya (costumes and make-up) and is to be done in accordance with the science of āhāryābhinaya (extraneous representation).

Dīkṣita (दीक्षित) means “initiated”, according to the Manthānabhairavatantra, a vast sprawling work that belongs to a corpus of Tantric texts concerned with the worship of the goddess Kubjikā.—Accordingly, “There is (the energy which is) one measure (ekamātrā), two measures (dvimātrā) and three measures (trimātrā). The (energy which is the) half-measure is supreme and subtle. Above it is (the one reality which is both) supreme (transcendent) and inferior (immanent). It is the teacher’s place, the Great Place. The Self, which is endowed with the consciousness of its own consciousness, has come from that Place. The pure (beings) who are on their way to the Supreme should also be conjoined into that plane, initiated [i.e., dīkṣita] by Śrīnātha”.

Dīkṣita (दीक्षित) refers to “initiation” (for the observance of ritualistic activities), according to the Śivapurāṇa 2.3.22 (“Description of Pārvatī’s penance”).—Accordingly, after Menā spoke to Pārvatī: “[...] Suppressing the delusion with fortitude after a long time Pārvatī, the daughter of Himavat, got herself initiated [i.e., dīkṣita] for the observance of ritualistic activities. She performed penance in the excellent holy centre Śṛṅgitīrtha which (later) acquired the title ‘Gaurī-Śikhara’ due to her performance of penance thereon. O sage, many beautiful holy plants were laid there by Pārvatī for testing the fruitfulness of her penance. [...]”.

Dīkṣita (दीक्षित) refers to “initiation” (into the great observance), as mentioned in the Malhar or Junwani copper plate inscription (647CE, see Bakker 2000 and 2015; Sanderson 2012).—Accordingly, “[…] reaching the present Kali age, the venerable Lord Lakulīśa took up an incarnation and was born in the family of a Brahmin called Somaśarman. He was initiated (dīkṣita) into the Great Observance by him (?) [and became] the Moon of the World. Then by him, Musalīśa [was initiated], then, by the unbroken tradition starting with Soma, the local Master Rudrasoma, his disciple Tejasoma, whose pupil is the venerable Bhīmasoma […]”.

Dīkṣita (दीक्षित) refers to “initiates”, according to the Devyāmata (chapter 105).—Accordingly, [while describing the construction of residence for initiates]—“A residence is recommended to the south of the temple. The residence should be built beyond the outer wall of the temple. It is to be dwelt in by initiates (dīkṣita), their senses well-subordinated, who have come to the image. Or, in its absence, [they should dwell in] another pleasant place. [...]”.

Dīkṣita.—(EI 22; CII 3, 4), same as Yajña-dīkṣita; epithet of Brāhmaṇas; later stereotyped as a Brahmanical family name. Note: dīkṣita is defined in the “Indian epigraphical glossary” as it can be found on ancient inscriptions commonly written in Sanskrit, Prakrit or Dravidian languages.

dīkṣita (दीक्षित).—m (S) One that has conducted a sacrifice: also any descendent of such person. 2 Engaged in a course of austerities or ceremonies; and fig. of arts, schemes, endeavors to accomplish an object gen. 3 fig. Expert, adroit, adept, eminently clever.

dīkṣita (दीक्षित).—m One that has conducted a sacri- fice: also any descendant of such person. Expert, adroit.

2) Prepared for a sacrifice.

5) Performed (as the dīkṣā ceremony).

3) A person who or whose ancestors may have performed a grand sacrificial ceremony, such as ज्योतिष्टोम (jyotiṣṭoma).

(-taḥ-tā-taṃ) 1. Initiated. 2. Performed, (as the Diksha ceremony.) 3. One by whom the preparatory ceremonies have been observed. m.

(-taḥ) 1. An assemblage of priests for peculiar ceremonies, or for any sacrifice. 2. The pupil or an ascetick. E. dīkṣ to perform a sacrifice or to be initiated, affix karttari kta or dīkṣā jātā asya tāra0 itac vā .

5) [v.s. ...] m. a pupil of (affixed, and rarely prefixed to the Name of a teacher, and given as a Name to a Brāhman to denote his being a pupil of that t° e.g. bhaṭṭoji-, śaṃ-kara-; sometimes the teacher’s Name is dropped and D° is used alone).

Dīkṣita (दीक्षित):—[(taḥ-tā-taṃ) p.] Initiated; done. 1. m. Assemblage of priests for any sacrifice; pupil of an ascetic.

Dīkṣita (दीक्षित) in the Sanskrit language is related to the Prakrit word: Dikkhia.

1) [noun] a man who has taken up an undertaking with determination, fervor and scrupulousness; a dedicated undertaker.

2) [noun] a man who is consecrated to take up a religious sacrifice.

3) [noun] a man who has performed the Sōma sacrifice.

4) [noun] a pupil of a religious preceptor.

Search found 35 books and stories containing Dikshita, Dīkṣita, Diksita; (plurals include: Dikshitas, Dīkṣitas, Diksitas). You can also click to the full overview containing English textual excerpts. Below are direct links for the most relevant articles: