Dhupa means something in Buddhism, Pali, Hinduism, Sanskrit, Marathi, Hindi, biology. If you want to know the exact meaning, history, etymology or English translation of this term then check out the descriptions on this page. Add your comment or reference to a book if you want to contribute to this summary article. 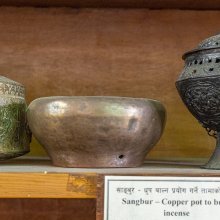 Dhūpa (धूप) refers to the “incense”, according to the Kularatnoddyota verse 2.12-20.—Accordingly, “[...] (He worshipped thus) with (offerings) of the most excellent and divine Great Incense (mahā-dhūpa-vara) and many kinds of ornaments, established in supreme non-duality with (substances) born from (his) great bodily essence. Endowed with supreme bliss and holding the great argha vessel, the Lord of the gods, worshipped, O dear one, the great and excellent Wheel and he, the emperor and Lord of the Śrīkula, deftly put all the Śrīkramas, including the sequence of the Child and the rest, in place in accord with the sequence”.

Dhūpa (धूप) refers to “incense” and is used in the worship of Gaṇeśa, according to the Padmapurāṇa 1.65 (“The Slaying of Kālakeya”).—Accordingly, as Vyāsa said:—“[...] The king is not angry with him; plague does not occur in his house; he does not feel the dearth (of anything); he does not suffer from weakness after (i.e. due to his) having worshipped Gaṇeśa. ‘(My) salutation to the chief of the Gaṇas, who removes all difficulties, who was worshipped even by gods for accomplishing their desired objects’. The sacred formula is: ‘Om, salutation to Gaṇapati’. He, who would worship the protector of the Gaṇas, with flowers dear to Viṣṇu, and other fragrant flowers, with modakas, fruits, roots and other seasonal things, with curds and milk, pleasing musical instruments, and with incense and (other) fragrant (objects) [i.e., dhūpa—dhūpasugaṃdhibhiḥ] obtains success in all undertakings. [...]”.

Dhūpa (धूप, “incense”) refers to “offering of incense” and represents one of the sixteen upacāra, or “sixteen types of homage and services”, as described while explaining the mode of worshipping the phallic form (liṅga) of Śiva in the Śivapurāṇa 1.11. Accordingly, “[...] the devotee shall worship the mobile emblem with the sixteen types of homage and services (upacāra) as prescribed. It accords the region of Śiva gradually. The sixteen types of service are [for example, offering of incense (dhūpa)] [...] Or he shall perform all the sixteen rites in the phallic emblem of human, saintly or godly origin, or in one naturally risen up (svayambhū) or in one of very extraordinary nature installed duly”.

Dhūpa or Dhūpasamarpaṇa (offering of incense) is also mentioned in the Śivapurāṇa 1.20, while explaining the mode of worshipping an earthen phallic image (pārthiva-liṅga) according to the Vedic rites:—“[...] the incense (dhūpa) shall be offered with the mantra ‘Namaḥ Kapardine ca’ etc. in accordance with the rules. The lamp shall be offered in the prescribed manner with the mantra ‘Namaḥ Āśave’ etc.”.

Dhūpa (धूप) refers to “fragrant incense” and represents one of the various upacāras (offerings), in pūjā (ritual worship), as defined in the Śaivāgamas.—Pūjā consists of offering hospitality, in the form of water to wash the feet, to drink, water for ablutions, offering a bath, new clothes, fragrant unguents, fragrant flowers and ornaments, food and so on. Each step in the pūjā process is called “saṃskāra” and each offering is called “upacāra” [viz., Dhūpa].

Dhūpa (धूप) refers to “perfume” (used in worship), according to the Netratantra of Kṣemarāja: a Śaiva text from the 9th century in which Śiva (Bhairava) teaches Pārvatī topics such as metaphysics, cosmology, and soteriology.—Accordingly, [verse 2.20-22ab]—“[The Mantrin] should worship the mother of mantras with the highest bhakti, by spreading flowers and perfume (dhūpa—puṣpadhūpādivistaraiḥ), O Devī. He should extract the deity invoked by the Mantra [with the mantra]. Beginning with the all-pervading and ending with manifold [oṃ], [he should] always [worship with] the nectar of the white flower. The bright sound is highest Śakti, [who] resembles one-in-the-same Śiva. By this [worship] the pearls [of the mantra] are all bound in a cord”.

Dhūpa (धूप) refers to “incense” and represents one of the articles offered during Maṅgalārati, according to the Arcana-dīpikā (manual on deity worship).—Before each article is offered, purify the right hand [with a drop of water from the pañca-pātra], and then purify the article [viz., dhūpa]. Chant the mūla-mantra for the deity and then offer the article.

Dhūpa (धूप) refers to “incense”, which is mentioned in verse 3.15 of the Aṣṭāṅgahṛdayasaṃhitā (Sūtrasthāna) by Vāgbhaṭa.—Accordingly, “[...] Passionate (and) lovely women with exuberant thighs, breasts, and buttocks take away the cold, their body being hot with incense [viz., dhūpa], saffron, and youth. [...]”.

Note: The instrumental dvandva “dhūpakuṅkumayauvanaiḥ”—“with incense, saffron, and youth” has been disconnected from its governing noun, separated into its three components, and converted by the requisite additions and alterations into a series of subject attributes: dhūpa (“incense”) becoming spos-kyis bdugs (“fumigated with incense”), kuṅkuma (“saffron”)—gur-gum-gyis byugs (“anointed with saffron”), and yauvana (“youth”)—gźon (“young”). At the same time, dhūpa and kuṅkuma have been interchanged, —sllos (for spos) in C and probably also bdug (for bdugs) in CD are xylographical errors.

Dhūpa (धूप) refers to “(perfumed) smoke”, according to the Bṛhatsaṃhitā (chapter 12), an encyclopedic Sanskrit work written by Varāhamihira mainly focusing on the science of ancient Indian astronomy astronomy (Jyotiṣa).—Accordingly, “[...] I will now speak of the rules of the arghya (offering) to be presented to Agastya as stated by the Ṛṣis. [...] When the darkness of the night should just begin to be broken by streaks of red light from the eastern horizon, princes, previously prepared for the purpose, ought to offer their arghya to Agastya by pouring it on the Earth in the direction of the star Canopus rising in the south-east as will be pointed out by the astronomer. The offering to be made by princes in honor of Agastya shall consist of the fragrant flowers of the season, of fruits, of precious stones, of gold cloths, of cows, of bulls, of well-cooked rice, of sweet-meats, of curdled milk, of colored rice, of perfumed smoke [i.e., surabhi-dhūpa] and fragrant paste”.

Dhūpa (धूप) refers to “offering incense”, representing one of the various services (upacāra) of a pūjā (ritualistic worship of a deity) which aim at the purification of the devotee.—The devotee waves incense sticks (dhūpa) in front of the icon. If pieces of incense are used, these are burnt in a special vessel with a handle (dhūpa-pātra). Simultaneously the worshipper rings the bell which—he holds in his left hand. The ringing of the bell is prescribed at several stages of the pūjā, e.g. when offering food or waving the ārati.498 Incense is believed to purify the air and drive away evil spirits.

Dhūpa (धूप) refers to “incense”, according to the Guru Mandala Worship (maṇḍalārcana) ritual often performed in combination with the Cakrasaṃvara Samādhi, which refers to the primary pūjā and sādhanā practice of Newah Mahāyāna-Vajrayāna Buddhists in Nepal.—Accordingly, “Incense and light (dhūpa-dīpa), the end of all consecrations, is equally splendid, I invite calmness and tranquility, rendering all knowledge clear”.

dhūpa (धूप).—m (S) Common frankincense. 2 Any fragrant gum or resin burned before idols &c: also the fragrant vapor exhaled on combustion. 3 f ( H) Sunshine. dhūpa ghālaṇēṃ To burn incense before a person possessed; that the demon may speak. Hence to court solicitously, sue, woo (a person to speak). dhūpa dākhaviṇēṃ (To show or offer incense.) To tantalize or mock (and give nothing).

(-paḥ) Incense, the aromatic vapour that proceeds from the combustion of any fragrant gum or resin, the use of which is authorized by scripture. E. dhūp to heat, affix ac. dhapayati rogān doṣān vā .

Dhūpa (धूप) [Also spelled dhup]:—(nf) the sun; sunshine; incense, gum benzoin; ~[ghaḍī] a sundial; —[caḍhanā] the sun to rise high in the sky, to be nearing midday; -[chāṃha] sun and shade; a kind of cloth with a sun and shade touch; (fig.) happiness and sorrow; ~[dāna] an incensory; a thurible; thurification, incensing; ~[dānī/pātra] an incensory, a thurible; ~[dāra] sunny; -[dīpa] accessories for worship—incense (—stick) and lamp; ~[battī] an incense-stick; ~[snāna] basking; —[khānā] to bask in the sun; to be heat-struck; to be sun-treated; —[dikhānā] to put or spread in the sun; —[denā] to burn incense (for religious performance); to spread out in the sun (as clothes etc.); —[meṃ bāla sapheda honā] to age without experience; to be old and yet devoid of wisdom; —[lenā/-sekanā] to bask in the sun.

2) [noun] fragrant smoke emitted by such a resin.

Verse 2.9.125 < [Chapter 9 - The Lord’s Twenty-One Hour Ecstasy and Descriptions of Śrīdhara and Other Devotees’ Characteristics]