Dhanu means something in Buddhism, Pali, Hinduism, Sanskrit, Jainism, Prakrit, Marathi, Hindi, biology. If you want to know the exact meaning, history, etymology or English translation of this term then check out the descriptions on this page. Add your comment or reference to a book if you want to contribute to this summary article. 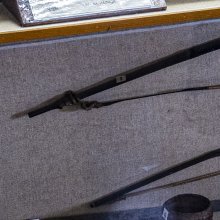 Dhanu (धनु).—Arc. Note: Dhanu is a Sanskrit technical term used in ancient Indian sciences such as Astronomy, Mathematics and Geometry.

1c) A pole from the term dhanurdaṇḍa, 96 angulas in measurement. Two of them measure one nāli, and 8000 one yojana.*

Dhanu (धनु) refers to the month corresponding to December-January, during which time snakes are born with “strong and energetic” characteristics, according to the 20th century Prayogasamuccaya (one of the most popular and widely practised book in toxicology in Malayalam).—According to the month in which they hatch, their characters differ. In that, the snakes born in caitra month (March- April) will have evil habits, those in dhanu (Dec- Jan) month will be strong and energetic, the ones in makara (Jan- Feb) month will be more poisonous than others. Snakes open their eyes on the 7th day after hatching and take further five days more to gain consciousness and to teeth. In another 30 days, they become poisonous.

Dhanu; ancient Hindu unit of measurement of distance. 4 Hastas make 1 Dhanu, and 8000 Dhanus make up for a single Yojana.

Another conversion: 300 Dhanus is one Nalva.

Dhanu (धनु, ‘sandbank’) (fem.) occurs several times in the Rigveda, but only metaphorically of the clouds in the atmosphere. Dhanū is found in the Atharvaveda, where it seems to denote a sandbag used to prevent bleeding.

Dhanu (धनु) refers to a “bow”, according to the Cakrasaṃvara Samādhi [i.e., Cakrasamvara Meditation] ritual often performed in combination with the Cakrasaṃvara Samādhi, which refers to the primary pūjā and sādhanā practice of Newah Mahāyāna-Vajrayāna Buddhists in Nepal.—Accordingly, “By the form of a skull cup, and by the letter Māṃ, Vāruṇī, Eighteen arms, one face, red color, and three eyes, A sword, arrow and hook, on the right, a skull cup, ax and banner, Thus a mace, thus a bell, and in the ninth, granting wishes, A two-headed drum, a bow (dhanu) and noose, a staff and a water pot, A trident, hammer and lute, and thus a number, in the upper hand, A young adolescent beauty, a great beauty, a beautiful goddess”.

Dhanu (धनु).— The dhanus are a group of celestial beings living in the lower regions of adholoka (lower world) according to Jaina cosmology. Adholoka is made up of seven regions and offers residence to the infernal beings existing within these lands.

Dhanu (धनु) refers to one of the  fifteen Paramādhārmīs causing suffering in the hells (naraka), according to Rājasoma’s “Naraka ko coḍhālyo”, which is included in the collection of manuscripts at the ‘Vincenzo Joppi’ library, collected by Luigi Pio Tessitori during his visit to Rajasthan between 1914 and 1919.—No name of any source is given in the text but the three stages followed in the exposition correspond closely to those found in a handbook such as Nemicandrasūri’s Pravacanasāroddhāra, [e.g.,] 3) sufferings inflicted by the fifteen Paramādhārmīs [e.g., Dhanu]. [...] These gods (here Sūra or Deva) form a sub-class of the Asurakumāras and perform their tasks in the first, second and third hells.

3) A measure of four hastas.

Search found 47 books and stories containing Dhanu, Dhanū, Dhaṇu; (plurals include: Dhanus, Dhanūs, Dhaṇus). You can also click to the full overview containing English textual excerpts. Below are direct links for the most relevant articles:

Chapter VI - Origin of the four castes < [Book I]

Chapter 29 - On the anecdote of Sāvitrī, on gifts and on the effects of Karmas < [Book 9]