Dashi means something in Buddhism, Pali, Hinduism, Sanskrit, the history of ancient India, Marathi, Jainism, Prakrit, Hindi. If you want to know the exact meaning, history, etymology or English translation of this term then check out the descriptions on this page. Add your comment or reference to a book if you want to contribute to this summary article.

The Sanskrit term Daśi can be transliterated into English as Dasi or Dashi, using the IAST transliteration scheme (?). 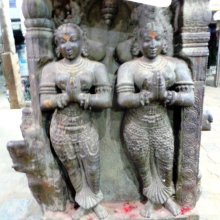 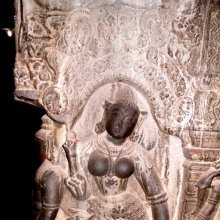 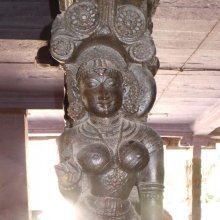 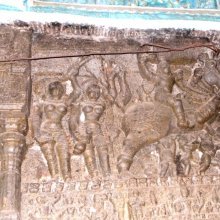 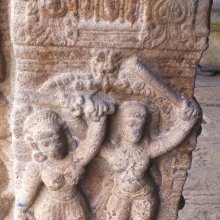 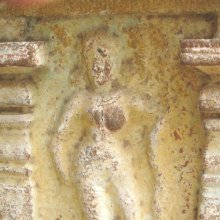 Daśi (दशि) refers to the person in charge of Ten villages. The word is used throughout Dharmaśāstra literature such as the Manusmṛti. (See the Manubhāṣya verse 7.119)

1b) Of four kinds, devadāsi, brahmadāsi, svatantra and śūdradāsika; the first two occupy the status of a Kṣatriya lady; the third enjoys the status of a dancing girl (veśi), and the last that of a low caste (hīnajāti).1 A synonym of Paricārika or a servant-maid.2

Dāsī (दासी) refers to the name of a River mentioned in the Mahābhārata (cf. VI.10.30). Note: The Mahābhārata (mentioning Dāsī) is a Sanskrit epic poem consisting of 100,000 ślokas (metrical verses) and is over 2000 years old.

Dāsī (दासी) is another name for Kākajaṅghā, an unidentified medicinal plant possibly identified with either Peristrophe bicalyculata Nees (Masī) or Leea aequata Linn. syn. Leea hirta Roxb. ex Hornem., according to verse 4.142-143 of the 13th-century Raj Nighantu or Rājanighaṇṭu. The fourth chapter (śatāhvādi-varga) of this book enumerates eighty varieties of small plants (pṛthu-kṣupa). Together with the names Dāsī and Kākajaṅghā, there are a total of seven Sanskrit synonyms identified for this plant.

[«previous (D) next»] — Dashi in Mahayana glossary
Source: academia.edu: A Study and Translation of the Gaganagañjaparipṛcchā

Dāsī.—(CITD), a handmaid, slave, concubine, dancing girl. Note: dāsī is defined in the “Indian epigraphical glossary” as it can be found on ancient inscriptions commonly written in Sanskrit, Prakrit or Dravidian languages.

daśī (दशी).—f An end or unwoven thread of a cloth.

1) A female servant or slave.

2) The wife of a fisherman.

Dāsī (दासी) in the Sanskrit language is related to the Prakrit word: Dāsī.

Dāsī (दासी) in the Prakrit language is related to the Sanskrit word: Dāsī.

1) [noun] a length of wood or metal, pointed at one end for driving into the ground as a boundary mark, part of a fence, support for a plant, etc.; a stake; a heavy peg.

3) [noun] a short, hard, leafless, pointed part of some plants; a thorn.

2) [noun] a woman who has sexual relations with a man without being married to him; a mistress; a courtesan.

Editor’s Preface to the English Edition