Darpaṇa means something in Buddhism, Pali, Hinduism, Sanskrit, Jainism, Prakrit, Marathi. If you want to know the exact meaning, history, etymology or English translation of this term then check out the descriptions on this page. Add your comment or reference to a book if you want to contribute to this summary article. 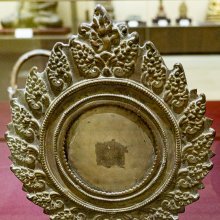 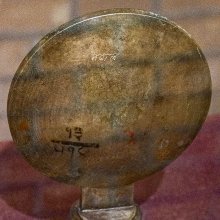 Darpaṇa (दर्पण) means a mirror. In ancient times, when glass was either unknown or was not employed for making mirrors, highly polished metal plates of various designs were utilised to serve as mirrors. It may be remarked by the way that this old speculum industry has not yet died out in India. In a place called Āramuḷa in Travancore, such mirrors are still manufactured; and the mirrors made by the workmen of this place are so true that they do not show distortion in reflection. Glass mirrors are not allowed to be used in temple service in Malabar, and it is not rare to find in wealthy temples in this part of the country speculum mirrors even as large as three feet by two feet. In sculptures the darpaṇa is either circular or oval in form, and is mounted on a well-wrought handle.

Darpaṇa (दर्पण, “mirror”) refers to one of the several “attributes” (āyudha) or “accessories” of a detiy commonly seen depicted in Hindu iconography, defined according to texts dealing with śilpa (arts and crafs), known as śilpaśāstras.—The śilpa texts have classified the various accessories under the broad heading of āyudha or karuvi (implement), including even flowers, animals, and musical instruments. Certain utensils and other objects that are commonly found in the hands of the images are, for example Darpaṇa.

Darpaṇa means a mirror. In ancient times, highly polished metal plates of various designs were utilized to serve as mirrors. The darpaṇa is either circular or oval in form, and is mounted on a well-wrought handle.

Darpaṇa (दर्पण) refers to a “mirror”, according to the Śivapurāṇa 2.2.21. Accordingly as Brahmā narrated to Nārada:—“[...] When they [viz., Śiva’s Gaṇas (attendants)] went away and He was left alone with Satī, Śiva rejoiced much and sported with her. [...] While Satī was admiring at the reflection of her face in the mirror (darpaṇa), Śiva came behind and peeped into the reflection of His own face”.

Darpaṇa (दर्पण).—A looking-glass to be installed by the side of a deity.*

Darpaṇa (दर्पण) refers to one of the eight aṣṭamaṅgala and represents a type of “temple implement (instrument)” as described in the Karaṇalakṣaṇavidhi-paṭala section of the Uttara-Kāmikāgama.—The instruments should be according to the particular śāstra followed at the temple. Some of the instruments mentioned are Śaiva aṣṭamaṅgala including [viz., darpaṇa].

[«previous (D) next»] — Darpaṇa in Tibetan Buddhism glossary
Source: academia.edu: The Structure and Meanings of the Heruka Maṇḍala

Darpaṇa (दर्पण) refers to a “mirror” and represents one of the items held in the right hand of Heruka: one of the main deities of the Herukamaṇḍala described in the 10th century Ḍākārṇava chapter 15. Heruka is positioned in the Lotus (padma) at the center; He is the origin of all heroes; He has 17 faces (with three eyes on each) and 76 arms [holding, for example, darpaṇa]; He is half black and half green in color; He is dancing on a flaming sun placed on Bhairava and Kālarātrī.

Darpaṇa (दर्पण) refers to the “mirror” and represents one of the “eight auspicious thins” in Jainism, according to chapter 1.2 [ādīśvara-caritra] of Hemacandra’s 11th century Triṣaṣṭiśalākāpuruṣacaritra (“lives of the 63 illustrious persons”): a Sanskrit epic poem narrating the history and legends of sixty-three important persons in Jainism.

“[...] Then, after circumambulating it, he ascended his aerial car, like his own lofty pride, by the east steps. [...] Then Śakra’s Śāmānikas, like other forms of Śakra, ascended by the north steps and took their proper seats. [...] In front of the Lord of Paulomī (Śakra) seated on the lion-throne shone eight groups of the eight auspicious things, [viz., darpaṇa], etc. [...]”.

Darpaṇa (दर्पण, “mirror”).—One of the eight providential symbols, or, aṣṭamaṅgala.—One is able to see one’s own self in it. A human being in order to be able to realize knowledge of oneself goes through austerities of ascetic meditation, charitable acts and observance of celibacy, which are a man’s embellishments.

2) Name of a mountain inhabited by Kubera.

Search found 20 books and stories containing Darpaṇa, Darpana, Darpaṇā; (plurals include: Darpaṇas, Darpanas, Darpaṇās). You can also click to the full overview containing English textual excerpts. Below are direct links for the most relevant articles: