Damana means something in Buddhism, Pali, Hinduism, Sanskrit, the history of ancient India, Marathi, Jainism, Prakrit, Hindi. If you want to know the exact meaning, history, etymology or English translation of this term then check out the descriptions on this page. Add your comment or reference to a book if you want to contribute to this summary article. 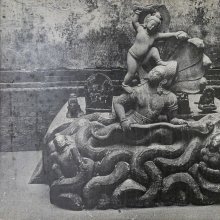 2) Damana (दमन).—A hermit. Bhīma the King of Vidarbha pleased this hermit, who blessed the King and said that he would get children. Accordingly the king got Damayantī as his daughter and Dama, Dānta and Damana as his sons. (Mahābhārata Vana Parva, Chapter 53).

4) Damana (दमन).—A son of Bharadvāja. After the investiture with the Brahma string (upanayana) Damana started on a travel. On the way near Amarakaṇṭaka he met with the hermit Garga who talked to him about the glory of Kāśi. Damana who was a seeker of spiritual knowledge, stopped his travel and sat down to do penance and thus leaving his body he attained heaven. (Skanda Purāṇa, Chapter 2, 4, 74).

1e) A Ṛtvik at Brahmā's sacrifice.*

Damanā (दमना) refers to one of the maids (cellakā) associated with Pūrṇagiri, one of the sacred seats (pīṭha), according to the Manthānabhairavatantra, a vast sprawling work that belongs to a corpus of Tantric texts concerned with the worship of the goddess Kubjikā.—Nine of the twelve female servants (three in each of the first four seats), are low-caste women who we find, in other contexts, embody the Mothers (mātṛkā). The maids (cellakā) [i.e., Damanā] are Yoginīs and the servants their male counterparts. These replace the spiritual ‘sons’ and ‘daughters’ the goddess generates and the guardians she appoints in the sacred seats listed in the ‘Kubjikāmatatantra’.

Damana (दमन) refers to “cutting down” (rogues and demons), according to the Śrī Caitanya Caritāmṛta 2.20.246 (“The Science of the Absolute Truth”).—(Cf. Śaktyāveśa).—The śaktyāveśa-avatāras are categorized into (1) forms of divine absorption (bhagavad-āveśa), such as Kapiladeva or ṛṣabhadeva, and (2) divinely empowered forms (śaktyāveśa), of whom seven are foremost: [i.e., (7) Paraśurāma, specifically empowered to cut down rogues and demons (duṣṭa-damana-śakti), [...]”.

Damana (दमन) or “taming” refers to one of the “nine mental abidings” (i.e., ‘nine stages of training the mind’) connected with śamatha (“access concentration”), according to Kamalaśīla and the Śrāvakabhūmi section of the Yogācārabhūmi-śāstra.—Damana (Tibetan: དུལ་བར་བྱེད་པ, dul-bar byed-pa) or “taming” refers to the stage where the practitioner achieves deep tranquility of mind, but must be watchful for subtle forms of laxity or dullness, peaceful states of mind which can be confused for calm abiding. By focusing on the future benefits of gaining śamatha, the practitioner can uplift (gzengs-bstod) their mind and become more focused and clear.

Damana (दमन) or Damaṇa is the name of a river mentioned in two similair inscriptions sponsored by Uṣavadāta, the son-in-law of Nahapāna. According to the inscription, Uṣavadāta established free crossings at rivers such as Damana. He also established public watering-stations on both banks of these rivers. The first inscription is found at Karle (ancient Valūraka) and the other on the wall of a rock-cut cave at Nasik.

The Kṣaharātas called themselves kṣatrapas (originally referring to military governors of the Achaemenid empire) and established a small kingdom in modern Gujarat. In the middle of the first century, a ruler named Kṣaharāta Kṣatrapa Nahapāna obtained several Sātavāhana establishments which were later recaptured by Gautamīputra Śrī Sātakarṇi.

damana (दमन).—n Subduing, taming, subjugation. The hood of a carriage.

2) Dāmana (दामन) [Also spelled daman]:—(nm) skirt of a garment; the extreme end of a sari: etc.; ~[gīra] an adherent, dependant; claimant; —[pakaḍanā] to seek the protection of, to become an adherent or follower (of); —[phailānā] to beg; to supplicate; —[meṃ dāga laganā] a have a broken feather in one’s wing, to suffer a moral fall.

Ḍamāna (ಡಮಾನ):—[noun] a set of two big drums, hung on either side of an ox, horse, camel, etc. taken in procession on festive occasions.

1) [noun] a bringing under control; subjugation.

3) [noun] (according to Indian art of love-making) a particular class of men.