Dala means something in Hinduism, Sanskrit, Buddhism, Pali, Marathi, Jainism, Prakrit, Hindi. If you want to know the exact meaning, history, etymology or English translation of this term then check out the descriptions on this page. Add your comment or reference to a book if you want to contribute to this summary article.

Alternative spellings of this word include Daal. 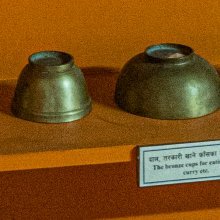 Dala (दल).—The son of King Parīkṣit of the dynasty of Ikṣvāku. The mother of Dala was Suśobhanā, the daughter of the King of Maṇḍūka. Dala had an elder brother called Śala. Dala became king when Śala was killed. Hermit Vāmadeva was the priest of this King. (Mahābhārata Vana Parva, Chapter 192). See Parīkṣit II.

Dala (दल) refers to the “leaves” of a tree or plant, as mentioned in a list of seven synonyms, according to the second chapter (dharaṇyādi-varga) of the 13th-century Raj Nighantu or Rājanighaṇṭu (an Ayurvedic encyclopedia). The Dharaṇyādi-varga covers the lands, soil, mountains, jungles and vegetation’s relations between trees [viz., Dala] and plants and substances, with their various kinds.

Dāla (दाल) refers to one of the eight kinds of honey (madhu) according to the Suśrutasaṃhitā Sūtrasthāna 45.133, and is commonly found in literature dealing with the topics of dietetics and culinary art, also known as Pākaśāstra or Pākakalā.—Honey was possibly, the earliest sweet thing Indians knew. [...] According to Suśruta the eight varieties of honey are mākṣika, bhrāmara, kṣaudra, pauttika, chātra, ārghya, auddalika and dāla each of these being obtained from different types of bees.

Dāla is also mentioned as one of the eight kinds of honey (madhu) according to the 17th century Bhojanakutūhala (dravyaguṇāguṇa-kathana).

[«previous (D) next»] — Dala in Jyotisha glossary
Source: Google Books: Studies in the History of the Exact Sciences (Astronomy)

Dala (दल) means “half” (i.e., ‘half of the height’), according to Lalla’s Śiṣyadhīvṛddhidatantra (Part I, 21, Yantrādhikāra, 34-35).—(Cf. Astronomical instruments in Bhāskarācārya’s Siddhāntaśiromaṇi).—Accordingly, “The bowl, which resembles half a pot (i.e. hemispherical), which is made of ten palas of copper, which is half a cubit (i.e. twelve aṅgulas) in diameter at the mouth and half (i.e. six aṅgulas) as high [i.e., dala-ucchrāya], which is evenly circular, and which is bored by a uniformly circular needle, made of three and one-third māṣas of gold and of four aṅgulas in length, sinks into clear water in one ghaṭikā (nāḍī)”.

Dala (दल) or Padminīdala refers to a “lotus petal”, according to the Ṣaṭsāhasrasaṃhitā, an expansion of the Kubjikāmatatantra: the earliest popular and most authoritative Tantra of the Kubjikā cult.—Accordingly, “(Kāmarūpa) is the Neuter (absolute) within the qualities. It has emerged as the pervasion (of consciousness) and, in front of the middle seat, is located on the peak in front. (Pleasing and delicate) like a lotus petal [i.e., padminī-dala-saṃkāśa], it is radiant (with energy)  and grey in colour. It shakes with mighty and fierce currents (of energy) engaged in striking against (it) and rocking (it) all around as it dries up (the entire) universe. The all-pervasive Lord of Kula resides within (this), the maṇḍala of six spokes. There is nothing devoid of that within the sphere of emanation and withdrawal”.

ḍāḷā (डाळा).—m A pile, an orderly heap (as of cakes, pots &c. . ḍāḷā ḍāḷaṇēṃ (lagna, saṃsāra, ityādikāñcā) To gather together, dispose in order, put in train, set in motion (articles and measures towards a marriage, an establishment in business &c.)

daḷa (दळ).—n (dala S) An army, or a corps, division, troop. 2 A half. 3 Pulverized ōṃvā for medicinal uses. 4 A leaf: also a petal of a flower. 5 Substance; real and solid matter (as inhering in or constituting anything); pulp, kernel, flesh, pith, marrow, nutriment, lit. fig. (as in fruits, leaves, paper, a soil). 6 The soft substance lining the rind of certain fruits. 7 Grime or caked dirt. daḷābharācā or -bhārācā Fleshy, brawny, pulpous, full of substance.

daḷā (दळा).—m C A patch on the side of a hill cleared and burned; for Nachn̤a or vegetables. 2 fig. A bare spot in a field of standing corn. 3 A banked up plot in a garden for vegetables.

dāla (दाल).—m Riband, lace, fine and worked tape; a web from one finger-breadth to two, of silk or thread, with or without gold or silver.

ḍāḷā (डाळा).—m A pile, an orderly heap. To gather, together, dispose in order.

daḷā (दळा).—m A patch on the side of a hill cleared and burned.

6) The blade of any weapon.

8) A detachment, a body of troops.

Dala (दल) in the Sanskrit language is related to the Prakrit word: Dala.

4) Dāla (दाल) [Also spelled daal]:—(nf) pulse; ~[moṃṭha] ([ṭa]) a kind of fried and spiced preparation with pulse as one of the ingredients; —[galanā] a manoeuvre/tricky measure to succeed; a (guileful) move to pay; —[dāliyā] pot-luck, poor diet; •[karanā] to enforce a decision either way, to decide this way or that way; •[honā] to be decided once for all; to be ruined; —[na galanā] to cut no ice, to effect little; —[bhāta meṃ mūsalacaṃda] an unwelcome intruder; —[meṃ kālā honā] to have something fishy; —[roṭī calanā] to maintain oneself somehow, just to manage a living.

3) [noun] a way or method in which something is or to be done, happens or happened; manner.

4) [noun] injury or harm to a person or thing, resulting in a loss in soundness or value; damage.

5) [noun] the act of polishing by rubbing the surface of.

8) [noun] (mus.) a phrase or phrases, having combinations of alternative notes, played or sung continuously.

1) [noun] a broad piece of armor, carried as a defence against swords, lances, arrows, etc.; a shield.

2) [noun] a shield-like metal plate, usu. of silver, awarded in a sport contest or other competition; a trophy.

Ḍāḷa (ಡಾಳ):—[noun] a moving or agitating air with or as with a fan.

1) [noun] a piece or fragment separated from a whole.

2) [noun] one of the segments of the corolla of a flower; a petal.

3) [noun] a group of people assembled or associated together.

4) [noun] a troupe or company of soldiers or army in gen.

7) [noun] the quality, fact or state of being humble (caused by the knowledge of one’s defects or shortcomings or by the lowness of one’s position, rank, etc.); humbleness.

8) [noun] an explanatory note or annotation.

1) [noun] the condition or fact of being dense.

1) [noun] a piece or fragment separated from a whole.

2) [noun] one of the segments of the corolla of a flower; a petal.

3) [noun] a group of people assembled or associated together.

4) [noun] a troop or company of soldiers or army in gen.

7) [noun] the quality, fact or state of being humble (caused by the knowledge of one’s defects or shortcomings or by the lowness of one’s position, rank, etc.); humbleness.

8) [noun] an explanatory note or annotation.

3) [noun] a troop of soldiers; a military unit.

1) [noun] a small cube of plastic, ivory, bone or wood, marked on each side with one to six spots, usu. used in pairs in games of chance or in gambling; a die.

Dāḷa (ದಾಳ):—[noun] a large conch-shell used to blow through to produce a continuous and loud sound.