Citrakuta means something in Hinduism, Sanskrit, Jainism, Prakrit. If you want to know the exact meaning, history, etymology or English translation of this term then check out the descriptions on this page. Add your comment or reference to a book if you want to contribute to this summary article.

Alternative spellings of this word include Chitrakuta. 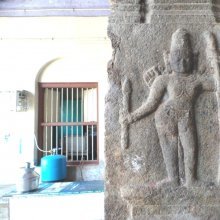 2) Citrakūṭā (चित्रकूटा).—Name of a river originating from Ṛkṣa, a holy mountain (kulaparvata) in Bhārata, according to the Varāhapurāṇa chapter 85. There are settlements (janapada) where Āryas and Mlecchas dwell who drink water from these rivers.

Renowned in the purāṇas, this mountain is on the banks of the river, Mandākinī. (Mahābhārata Vana Parva, Chapter 85). It was here, at Citrakūṭa that Śrī Rāma, Sītā and others lived for a period of time. It is said that Rājalakṣmī (royal wealth and welfare) will embrace those who fast on the Citrakūṭa after a bath in the Mandākinī. (Mahābhārata Anuśāsana Parva, Chapter 26, Verse 29). This mountain is in Bāndā Zilla of the U.P. in modern India.

Citrakūṭa (चित्रकूट) is the name of a Mountain, according to the Śivapurāṇa 2.3.37 (“The letter of betrothal is dispatched”).—Accordingly, as Himavat prepared the wedding of Menā and Śiva: “[...] The mountains Trikūṭa, Citrakūṭa, Veṅkaṭa, Śrīgiri, Gokāmukha and Nārada came also. The excellent mountain Vindhya possessing many riches, came there delightedly along with his wife and sons. The mountain Kālañjara, highly resplendent and extremely delighted came along with his attendants. [...]”.

Citrakūṭa (चित्रकूट) refers to the name of a Mountain or Tīrtha (pilgrim’s destination) mentioned in the Mahābhārata (cf. III.83.55). Note: The Mahābhārata (mentioning Citrakūṭa) is a Sanskrit epic poem consisting of 100,000 ślokas (metrical verses) and is over 2000 years old.

Citrakūṭa (चित्रकूट) refers to a type of temple (prāsāda) classified under the group named Vairāja, according to Samarāṅgaṇasūtradhāra chapter 49. The Vairāja group contains twenty-four out of a sixty-four total prāsādas (temples) classified under five prime vimānas (aerial car/palace), which were created by Brahmā for as many gods (including himself). The group represents temples (e.g. Citrakūṭa) that are to be square shaped. The prāsādas, or ‘temples’, represent the dwelling place of God and are to be built in towns. The Samarāṅgaṇasūtradhāra is an 11th-century encyclopedia dealing with various topics from the Vāstuśāstra.

Citrakūṭa is mentioned in another list from the Samarāṅgaṇasūtradhāra chapter 56, being part of the group named Miśraka, containing 9 unique temple varieties.

Citrakūṭa is found in another list in the Samarāṅgaṇasūtradhāra, chapter 60, where it is mentioned in a list of thirty-six Prāsādas (temples) having activities of the townsmen entailing Sādhārās.

1) Citrakūṭa (चित्रकूट) is the name of an ancient king, as mentioned in the Kathāsaritsāgara, chapter 28. Accordingly, “there was a young king named Suṣeṇa on the mountain of Citrakūṭa, who was created like another God of Love by the Creator to spite Śiva. He made at the foot of that great mountain a heavenly garden, which was calculated to make the gods averse to dwelling in the garden of Nandana. And in the middle of it he made a lake with full-blown lotuses, like a new productive bed for the lotuses with which the Goddess of Fortune plays. This lake had steps leading down into it made of splendid gems, and the king used to linger on its banks without a bride, because there were no eligible matches for him”.

2) Citrakūṭa (चित्रकूट) is the name of a city according to the story “Sattvaśīla and the two treasures” according to the Kathāsaritsāgara, chapter 35. Accordingly, “in the town of Citrakūṭa there was a king named Brāhmaṇavara, rightly named, for he was devoted to honouring Brāhmans”.

Citrakūṭa or Citrakūṭapura is also mentioned in the Kathāsaritsāgara, chapter 56. Accordingly, “... then Candrasvāmin went with a merchant named Koṭīśvara to Citrakūta, crossing the sea in his ship. And in that city he found the merchant Kanakavarman, and longing tor his children, he told him the whole story”.

Citrakūṭa or Citrakūṭanagara is also mentioned in the twentieth story of the Vetālapañcaviṃśati in the Kathāsaritsāgara, chapter 94. Accordingly, “... there is a city called Citrakūṭa, rightly so named, where the established divisions of the castes never step across the strict line of demarcation”.

The Kathāsaritsāgara (‘ocean of streams of story’), mentioning Citrakūṭa, is a famous Sanskrit epic story revolving around prince Naravāhanadatta and his quest to become the emperor of the vidyādharas (celestial beings). The work is said to have been an adaptation of Guṇāḍhya’s Bṛhatkathā consisting of 100,000 verses, which in turn is part of a larger work containing 700,000 verses.

Citrakūṭa (चित्रकूट) refers to a mountain belonging to “Dakṣiṇa or Dakṣiṇadeśa (southern division)” classified under the constellations of Uttaraphālguni, Hasta and Citrā, according to the system of Kūrmavibhāga, according to the Bṛhatsaṃhitā (chapter 14), an encyclopedic Sanskrit work written by Varāhamihira mainly focusing on the science of ancient Indian astronomy astronomy (Jyotiṣa).—Accordingly, “The countries of the Earth beginning from the centre of Bhāratavarṣa and going round the east, south-east, south, etc., are divided into 9 divisions corresponding to the 27 lunar asterisms at the rate of 3 for each division and beginning from Kṛttikā. The constellations of Uttaraphālguni, Hasta and Citrā represent the southern division consisting of [i.e., Citrakūṭa] [...]”.

Citrakūta (चित्रकूत): Chitrakūta was in mountain forests where Rama, Sita and Lakshmana spent eleven and half years of their exile; The hermitages of Vālmīki, Atri, Sati Anusuya, Dattatreya, Maharshi Markandeya, Sarbhanga, Sutikshna were here; and here the principal trinity of the Hindu pantheon, Brahma, Vishnu and Mahesh, took their incarnations.

Citrakūṭa (चित्रकूट) is the name of a mountain which is situated along the east bank of the river Sitodā. On top of Citrakūṭa and Vicitrakūṭa are the temples of the Jinas. The river Sitodā is mentioned as flowing through Videha together with the Sitā river. Videha is one of the seven regions (kṣetra) of Jambūdvīpa according to Jaina cosmology. Jambūdvīpa sits at the centre of madhyaloka (‘middle world’) is the most important of all continents and it is here where human beings reside.

1) Citrakūṭa (चित्रकूट) is the name of a Vidyādhara-city, situated on mount Vaitāḍhya (in the southern row), according to chapter 1.3 [ādīśvara-caritra] of Hemacandra’s 11th century Triṣaṣṭiśalākāpuruṣacaritra (“lives of the 63 illustrious persons”): a Sanskrit epic poem narrating the history and legends of sixty-three important persons in Jainism.

Accordingly, “[...] Taking their families and all their retinue and ascending the best of cars, they went to Vaitāḍhya. [...] Ten yojanas above the earth, King Nami made fifty cities on the mountain in a southern row [viz., Citrakūṭa]. Nami himself lived in Śrīrathanūpuracakravāla, the capital city among these cities. [...] The two rows of Vidyādhara-cities looked very magnificent, as if the Vyantara rows above were reflected below. After making many villages [viz., Citrakūṭa] and suburbs, they established communities according to the suitability of place. The communities there were called by the same name as the community from which the men had been brought and put there. [...]”.

2) Citrakūṭa (चित्रकूट) is the name of a mountain range in Jambūdvīpa which is situated in the “middle world” (madhyaloka), according to chapter 2.2.—Accordingly, “To the north of the Niṣadha Mountains and to the south of Meru are the Vidyutprabha Mountains and the Saumanasa Mountains in the west and east. They have the shape of an elephant’s tusk, almost touching Meru at the end. Between them are the Bhogabhumis, the Devakurus, 11,842 yojanas wide. In them, at each side of the five lakes divided by Śītodā, are ten mountains of gold, making a total of 100. There on the east and west banks of Śītodā are the mountains Vicitrakūṭa and Citrakūṭa. They are 1000 yojanas in height and the same in diameter at the base. The diameter at the top is half of that”.

Citrakūṭa is a Sanskrit compound consisting of the terms citra and kūṭa (कूट).

(-ṭaḥ) The name of a mountain in Bundelkhand, the modern Compteh, and first habitation of Rama in his excile. E. citra wonderful, and kūṭa peak; it is an epithet of many hills. citraṃ kūṭaṃ śṛṅgaṃ asya .

Citrakūṭa is a Sanskrit compound consisting of the terms citra and kūṭa (कूट).

Chapter 4.20 - Animals and birds in the epic Ramayana (Introduction)

11. Descriptions of the rivers in the Jambudvīpa < [Chapter 5 - Rivers in the Purāṇic Literature]