Ciranjiva means something in Hinduism, Sanskrit, the history of ancient India, Marathi. If you want to know the exact meaning, history, etymology or English translation of this term then check out the descriptions on this page. Add your comment or reference to a book if you want to contribute to this summary article.

Alternative spellings of this word include Chiranjiva. 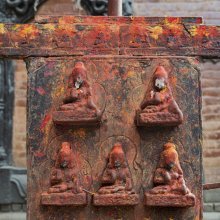 Cirañjīva Bhaṭṭācārya (fl. 17th century) is the author of the Kāvyavilāsa. His real name was Rāmadeva or Vāmadeva. He was better known by his pet name Cirañjīva, which was given to him by his uncle out of sheer affection. Cirañjīva came of a famous educated Brahmin family. Dakṣa was the first member of his family whose account had been given and he lived at Rāḍhāpura in Gauḍa country. According to the Mādhavacampū, Cirañjīva was born in Navadvīpa. In the Vidvanmodataraṅgiṇī it is written that he used to teach at Kāsi after his father’s death.

Cirañjīva.—(EI 30), ‘long-lived’; epithet of living (not dead) persons. Note: cirañjīva is defined in the “Indian epigraphical glossary” as it can be found on ancient inscriptions commonly written in Sanskrit, Prakrit or Dravidian languages.

cirañjīva (चिरंजीव).—m (S cira Long, jīva Life.) A term for a son. 2 A term of address in notes to a son, a younger brother, or any young person viewed as a protégé.

cirañjīva (चिरंजीव).—m A term for a son; a term of address in notes to a son, a younger brother, or any young person viewed as a protegee.

-vaḥ An epithet of Kāma.