Channa means something in Buddhism, Pali, Hinduism, Sanskrit, Marathi, Jainism, Prakrit, Hindi. If you want to know the exact meaning, history, etymology or English translation of this term then check out the descriptions on this page. Add your comment or reference to a book if you want to contribute to this summary article.

Alternative spellings of this word include Chhanna. 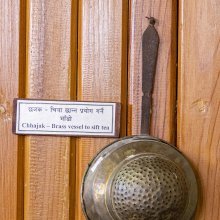 Channa (चन्न) : A royal servant and head charioteer of Prince Siddhartha, who was to become the Buddha.

1. Channa - A Wanderer, classed among those who wore clothes (paticchannaparibbajaka). He is only mentioned once, in the Anguttara Nikaya (A.iii.215), where we are told that he visited Ananda at Savatthi and asked him questions about the Buddhas teaching (see Channa Sutta below). Both the Sutta and the Commentary (AA.i.432) add that he was pleased with Anandas explanation, and admitted that the Buddhas teachings were worthy of being followed, though it is not explicitly stated that he accepted them.

2. Channa - A Thera. No particulars of his early life are available. He once stayed at Gijjhakuta, dangerously ill and suffering much pain. He was visited by Sariputta and Maha Cunda, and when they discovered that he contemplated suicide, they tried to deter him, promising to provide him with all necessaries and to wait on him themselves. Finding him quite determined, Sariputta discussed with him the Buddhas teachings and then left him. Soon afterwards Channa committed suicide by cutting his throat. When this was reported to the Buddha, he explained that no blame was attached to Channa, for he was an arahant at the moment of death (M.iii.263ff; S.iv.55ff).

Buddhaghosa explains (MA.ii.1012f.; SA.iii.12f ) that after cutting his throat, Channa, feeling the fear of death, suddenly realised that he was yet a puthujjana. This thought so filled him with anguish that he put forth special effort, and by developing insight became an arahant.

Channa had friends and relations in the Vajjian village of Pubbavijjhana (v.l. Pubbavajira), and came himself from there. v.l. Chandaka.

3. Channa - Gotamas charioteer and companion, born on the same day as Gotama (J.i.54; Mtu.ii.156, 164, 189, 233; iii.91, 262; BuA.233; SA.ii.231; DhsA.34. ThagA. (i.155) says he was the son of a servant woman of Suddhodana). When Gotama left household life, Channa rode with him on the horse Kanthaka as far as the river Anoma. There Gotama gave him his ornaments and bade him take Kanthaka back to his fathers palace (A thupa was later erected on the spot where Channa turned back; Dvy.391). When, however, Kanthaka died of a broken heart, Channas grief was great, for he had suffered a double loss. It is said that he begged for leave to join Gotama as a recluse, but this leave was refused (J.i.64f). He therefore returned to Kapilavatthu, but when the Buddha visited his Sakiyan kinsfolk, Channa joined the Order. Because of his great affection for the Buddha, however, egotistical pride in our Buddha, our Doctrine arose in him and he could not conquer this fondness nor fulfil his duties as a bhikkhu. (ThagA.i.155; his verse (No.69) quoted in Thag. does not, however, refer to any such remissness on his part).

Once, when in the Ghositarama in Kosambi, Channa committed a fault but was not willing to acknowledge it.

chaṇṇa (छण्ण).—ad Imit. of a tinkling or jingling (as of the little bells on the toes &c.)

Channa (छन्न) in the Sanskrit language is related to the Prakrit word: Chaṇṇa.

1) Chaṇṇa (छण्ण) in the Prakrit language is related to the Sanskrit word: Channa.

Channa (ಛನ್ನ):—[noun] the condition or an instance of hiding or being without revealing one’s identify; incognito.

Search found 30 books and stories containing Channa, Channā, Chaṇṇa; (plurals include: Channas, Channās, Chaṇṇas). You can also click to the full overview containing English textual excerpts. Below are direct links for the most relevant articles:

On the higher penalty < [21. (Recitation with) Five Hundred (Pañcasata)]

An act of suspension for not seeing an offence < [11. The followers of Paṇḍuka and Lohitaka (Paṇḍulohitaka)]

An act of suspension for not making amends for an offence < [11. The followers of Paṇḍuka and Lohitaka (Paṇḍulohitaka)]