Chanda means something in Buddhism, Pali, Hinduism, Sanskrit, the history of ancient India, Marathi, Jainism, Prakrit, Hindi, biology. If you want to know the exact meaning, history, etymology or English translation of this term then check out the descriptions on this page. Add your comment or reference to a book if you want to contribute to this summary article.

Alternative spellings of this word include Chhanda.

Ambiguity: Although Chanda has separate glossary definitions below, it also represents an alternative spelling of the word Canda. 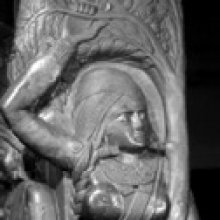 Chanda (छन्द) is a Sanskrit technical term translating to “shape”, or “appereance” and is used in the literature of Vāstuśāstra (branch of Hindu science dealing with architecture and construction).

Chanda (छन्द) refers to “groves”, according to the Śivapurāṇa 2.2.21. Accordingly as Brahmā narrated to Nārada:—“[...] When Kāma (God of Love) reached the vicinity of Śiva, Spring spread all his splendour in accord with the inclination of the lord. [...] In this atmosphere, on that excellent mountain, Lord Śiva sported about for a long time among the groves (chanda), hedges (nikuñja) and streams (nadī) in the company of Satī”.

Chanda (छन्द).—Vedic metres as steeds of the sun's chariot;1 as part of Viṣṇu.2 Seven in number—names given.

Chanda in the Marathi language is the name of a plant identified with Macaranga peltata (Roxb.) Müll.Arg. from the Euphorbiaceae (Castor) family having the following synonyms: Macaranga roxburghii, Tanarius peltatus, Mappa peltata. For the possible medicinal usage of chanda, you can check this page for potential sources and references, although be aware that any some or none of the side-effects may not be mentioned here, wether they be harmful or beneficial to health.

One of the Pakinnaka cetasikas. Chanda is wish. It is mere desire. It is a will. When chanda becomes the heading dhamma it becomes adhipati dhamma or leading dhamma. It is also one of 4 iddhipada or foot of success or root of success.

1. As an ethically neutral psychological term, in the sense of 'intention', it is one of those general mental factors (cetasika, q.v. Tab. II) taught in the Abhidhamma, the moral quality of which is determined by the character of the volition (cetanā, q.v.) associated therewith. The Com. explains it as 'a wish to do' (kattu-kamyatā-chanda). If intensified, it acts also as a 'predominance condition' (s. paccaya 3).

2. As an evil quality it has the meaning of 'desire', and is frequently coupled with terms for 'sensuality', 'greed', etc., for instance: kāma-cchanda, 'sensuous desire', one of the 5 hindrances (s. nīvarana); chanda-rāga, 'lustful desire' (s. kāma). It is one of the 4 wrong paths (s. agati).

3. As a good quality it is a righteous will or zeal (dhamma-chanda) and occurs, e.g. in the formula of the 4 right efforts (s. padhāna): "The monk rouses his will (chandam janeti)...." If intensified, it is one of the 4 roads to power (s. iddhipāda).

Chanda, which is usually translated as zeal, desire or wish-to-do, is another cetasika among the six "particulars" which arises with cittas of the four jatis- but not with every citta.

The cetasika "chanda" which is classified as one of the "particulars" is not the same as lobha, it has its own characteristic and function.

Chanda can be kusala, akusala, vipaka or kiriya.

1) Chanda (छन्द) refers to “resolve”, according to Mahāprajñāpāramitāśāstra (chapter 2).—Accordingly, “[...] The Buddha spoke this stanza: ‘My conduct (carya) has no master (acārya). My resolve (chanda) is one and peerless. By observing a single practice, I have become Buddha. By myself (svataḥ), I have penetrated the noble Path (āryamārga)’.”.—(Cf. Vinaya, I; Majjhima, I; Mahāvastu, III; Sanskrit Udānavarga; Lalitavistara; Tseng yi a han; Wou fen liu, etc.)

2) Chanda (छन्द) refers to the “desire of action”, according to Mahāprajñāpāramitāśāstra (chapter 19).—Great fruits are promised for the generosity accomplished by a person endowed with morality (śīlavat) who, according to the Aṅguttara, is free of the five faults and provided with five qualities. The five faults, viz., sensual desire (kāma) and the desire of action (chanda); maliciousness (vyāpāda); laziness (styāna) and languor (middha); agitation (auddhatya) and regret (kaukṛtya) and finally, doubt (vicikitsā) are borrowed from the list of paryavasthānas which the practice of generosity helps to eliminate. The Mppś has already given a complete list of the (cf. Treatise, I, p. 424F).

3) Chanda (छन्द) or “zeal” refers to one of the “five dharma practices” (pañcāṅga) for obtaining the first dhyāna according to the 2nd century Mahāprajñāpāramitāśāstra (chapter XXVIII). Accordingly, “Chanda is zeal in kāmadhātu; when it is produced, the first dhyāna is obtained”.

Chanda (छन्द) refers to “eagerness”, according to the Gaganagañjaparipṛcchā: the eighth chapter of the Mahāsaṃnipāta (a collection of Mahāyāna Buddhist Sūtras).—Accordingly, as Gaganagañja said to Ratnapāṇi: “Son of good family, those sixty-four dharmas are included in one hundred twenty-eight dharmas. What are those one hundred twenty-four? [...] (59) the lightness of body is included in knowing the proper time for eating and making an effort at practicing vigilance in the beginning and end of the night; (60) lightness of thought is included in eagerness (chanda) and examination; (61) being free from lassitude is included in impermanence and suffering; (62) desire is included in the absence of what belongs to the ego and property; [...]’”.

Chanda (छन्द) (Tibetan: ’dun-pa) refers to “aspiration” (which is applied as an antidote for laziness), and represents one of the eight Pratipakṣa (“applications”) or Abhisaṃskāra (“applications”) (applied to overcome the five faults), according to Kamalaśīla and the Śrāvakabhūmi section of the Yogācārabhūmi-śāstra.

Chanda (छन्द) is the name of a Vākchomā (‘verbal secrect sign’) which has its meaning defined as ‘mālā’ according to chapter 8 of the 9th-century Vajraḍākamahātantrarāja, a scripture belonging to the Buddhist Cakrasaṃvara (or Saṃvara) scriptural cycle. These Vākchomās (viz., chanda) are meant for verbal communication and can be regarded as popular signs, since they can be found in the three biggest works of the Cakrasaṃvara literature.

Chanda (छन्द) or Chandarddhipāda  “(power of) desire” is associated with Pracaṇḍā and Khaṇḍakapāla, according to the Cakrasaṃvara-maṇḍala or Saṃvaramaṇḍala of Abhayākaragupta’s Niṣpannayogāvalī, p. 45 and n. 145; (Cf. Cakrasaṃvaratantra, Gray, David B., 2007).—The Cakrasaṃvara mandala has a total of sixty-two deities. [...] Three concentric circles going outward, the body, speech and mind wheels (kāya-vāka-citta), in the order: mind (blue), speech (red), and body (white), with eight Ḍākinīs each in non-dual union with their Ḍākas, "male consorts".

Chanda (छन्द) is translated as “intention”, “interest”, or “desire to act”. It is defined as trying to possess a certain object–an interest or desire that supports the application of exertion. According to the Abhidharma-samuccaya: “What is chanda? It is the desire to endow a desired thing with this or that particular attribute, and has the function of laying the foundation for making a start on assiduous striving”.

Chanda is the name of a district in Maharashtra corresponding the modern Chandrapur.—The Buddhist work, Mahavamsa, refers to Maharashtra. It suggests that a big area around Ujjain, that is, the present Central India could have been talked about as Maharashtra. As the legend goes there were (or might have been) 99,000 villages in this country. These days it is a practice to include all areas (Chanda) where Marathi language is in use into Maharashtra.

chanda (छंद).—m (S) Metre. 2 A liking or fondness for; a predilection or propensity (for a pursuit good or evil). v ghē, dhara, kara, lāga. 3 A longing or hankering after; impatient desire. v ghē, dhara 4 Will, pleasure, discretion. Ex. yajamānācē chandānēṃ āmhāsa vāgāvēṃ lāgatēṃ. 5 Mischievous tricks; lawless pranks; freaks and frolics; wild and wilful conduct gen. 6 A particular bracelet: also a particular ornament for the feet. 7 Any treatise on prosody: also a name for the Vedas. chandāsa lāgaṇēṃ or bharaṇēṃ g. of o. To be taken up with; to be full of; to be enchanted and engrossed by.

chanda (छंद).—m Metre. A liking for. A hankering after. Will. Miscnievous tricks.

Chanda (छन्द).—[adjective] pleasant, alluring. [masculine] appearance, shape; delight, pleasure; wish, desire. Instr. & [ablative] at one’s own pleasure or will, freely; at the pleasure or will of ([genetive] or —°).

Chanda (छन्द).—[adjective] pleasant, alluring. [masculine] appearance, shape; delight, pleasure; wish, desire. Instr. & [ablative] at one’s own pleasure or will, freely; at the pleasure or will of ([genetive] or —°).

Chanda in Hindi refers in English to:—(nm) the moon; subscription; contribution; donation; —[ikattha karana] to raise a fund by contribution/donation; —[karana] to contribute, to subscribe; —[dena] to subscribe, to contribute; —[mama] moon—the maternal uncle (said to humour the children); —[sa] as beautiful as the moon (esp. used for face)..—chanda (चंदा) is alternatively transliterated as Caṃdā.

1) Chaṃda (छंद) in the Prakrit language is related to the Sanskrit word: Chand.

1) [noun] that which is beautiful, charming, attractive.

2) [noun] a way of doing, being done or happening; mode of action, occurrence, etc; a manner.

3) [noun] enjoyment or satisfaction derived from what is to one’s liking; gratification; delight; pleasure.

4) [noun] wish or desire; inclination of the mind.

Bodhisattva quality 6: words worthy of faith < [Chapter X - The Qualities of the Bodhisattvas]