Caturbhuja means something in Buddhism, Pali, Hinduism, Sanskrit, the history of ancient India, Marathi. If you want to know the exact meaning, history, etymology or English translation of this term then check out the descriptions on this page. Add your comment or reference to a book if you want to contribute to this summary article.

Alternative spellings of this word include Chaturbhuja. 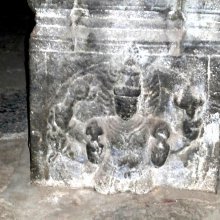 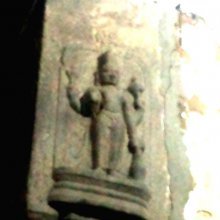 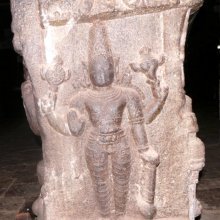 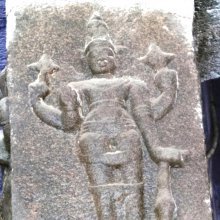 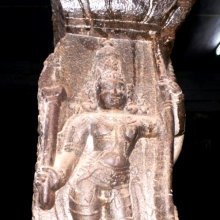 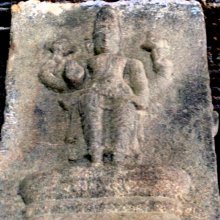 Catur-bhuja (‘The four arms’): The four arms represent the three fundamental qualities (gunas) and thenotion of individuality (ahamkara) [from which all existence arises].

Caturbhuja (चतुर्भुज) is found as a sculpture at the temple of Lokeśvara, western half of the north wall, northern façade.—Standing statue of Śiva with four hands. There is no second gaṇa to the left of the god. Of his two lower hands the right one is damaged and the left is in kaṭyavalambita. The ornamentation of the images in both the niches is alike. Above the niche, in the effigy of a shrine, is carved Garuḍārūḍha Viṣṇu. Garuḍa is shown in flying pose, carrying his Lord Viṣṇu on his shoulders. The scene is in an ornately decorated sanctum with pillars and paraphernalia.

1) Caturbhuja (चतुर्भुज) refers to “having four arms”, used to describe the appearance of Goddess Durgā, according to the Śivapurāṇa 2.2.11. Accordingly as Brahmā said to Nārada:—“[...] O celestial sage, on being thus lauded Caṇḍikā, the mystic slumber, appeared before me. Her complexion had the glossy hue of collyrium. She had comely features. She had four divine arms (divya-caturbhuja). She was seated on a lion. She showed the mystic gesture of granting boons by one of her hands, and pearls adorned her dishevelled hair”.

2) Caturbhuja (चतुर्भुज) refers to “one who has four arms” which is used to describe the appearance of Śiva, according to the Śivapurāṇa 2.2.17. Accordingly as Brahmā narrated to Nārada:—“[...] When her Nandā rites were concluded on the ninth day (Navamī), while she was engrossed in meditation, Śiva became visible to her. [...] He was in a joyous mood. He had four arms (caturbhuja) and His neck was blue in colour. [...]”.

3) Caturbhuja (चतुर्भुज) or “four-armed one” is also used as an epithet for Viṣṇu, according to the Śivapurāṇa 2.2.36. Accordingly:—“[...] On hearing these words of the sages Viṣṇu, desirous of fighting with Vīrabhadra went ahead. The powerful Viṣṇu, the four-armed (i.e., caturbhuja) discus-bearing Viṣṇu, fully equipped, came out of the sacrificial chamber along with the Devas”.

Caturbhuja (चतुर्भुज) or Caturbhujarasa is the name of a Ayurvedic recipe defined in the fifth volume of the Rasajalanidhi (chapter 24, Apasmara: epilepsy). These remedies are classified as Iatrochemistry and form part of the ancient Indian science known as Rasaśāstra (medical alchemy). However, since it is an ayurveda treatment it should be taken with caution and in accordance with rules laid down in the texts.

Accordingly, when using such recipes (e.g., caturbhuja-rasa): “the minerals (uparasa), poisons (viṣa), and other drugs (except herbs), referred to as ingredients of medicines, are to be duly purified and incinerated, as the case may be, in accordance with the processes laid out in the texts.” (see introduction to Iatro chemical medicines)

Caturbhujā (चतुर्भुजा) refers to “she who has four arms”, according to the Śrīmatottara-tantra, an expansion of the Kubjikāmatatantra: the earliest popular and most authoritative Tantra of the Kubjikā cult.—Accordingly, “(The adept) should meditate on the goddess Parāparā in the middle of the triangle. (Parāparā) shines with the light of the rising sun and is (red) like a pomegranate flower. She wears red clothes and is adorned with dreadlocks and the moon. Three wrinkles and a line of hair (adorn the middle of her body). She is replete with all fine characteristics and has fat upraised breasts. Tranquil and supreme, she has four arms [i.e., caturbhujā] and one face with three eyes. [...]”.

Caturbhuja (चतुर्भुज) refers to a “quadrangle” as described in the Kṣetragaṇitaśāstra, as mentioned in A. Rahman’s Science and Technology in Medievel India: A bibliography of source materials in Sanskrit, Arabic and Persian.—Ancient and medieval India produced a wide range of scientific manuscripts and major contributions lie in the field of medicine, astronomy and mathematics, besides covering encyclopedic glossaries and technical dictionaries.—The Kṣetragaṇita-śāstra is a Sanskrit mathematical treatise dealing with the art of measuring lands, containing well-defined and established technical terms [e.g., Caturbhuja] wanted for practical use in the Tamil language.

Caturbhuja (चतुर्भुज) refers to a “four-armed deity”, according to the Netratantra of Kṣemarāja: a Śaiva text from the 9th century in which Śiva (Bhairava) teaches Pārvatī topics such as metaphysics, cosmology, and soteriology.—Accordingly, [verse 3.17-23, while describing a meditation on Amṛteśa in his form as Mṛtyujit]—“And so now, having constructed the amṛtāmudrā or the padmamudrā, [the Mantrin] should meditate on the Ātman. [...] [He is] one-faced, three-eyed, seated on a white lotus, fixed in the bound lotus seat. [He is] four-armed (caturbhuja), large-eyed, the hand [fixed in the position] of granting wishes and safety, [holding] a full moon, radiant, filled with amṛta, holding a water pot, [and] completely full of the world, the moon in his lovely hand. [The Mantrin] should remember him adorned with a reverence that is all white”.

Caturbhuja (चतुर्भुज) is the name of Vidyārāja (i.e., “wisdom king”) mentioned as attending the teachings in the 6th century Mañjuśrīmūlakalpa: one of the largest Kriyā Tantras devoted to Mañjuśrī (the Bodhisattva of wisdom) representing an encyclopedia of knowledge primarily concerned with ritualistic elements in Buddhism. The teachings in this text originate from Mañjuśrī and were taught to and by Buddha Śākyamuni in the presence of a large audience (including Caturbhuja).

Caturbhuja (चतुर्भुज) or Caturbhuja-Sitatārā refers to a deity from the White Tārā family, according to Buddhist Iconography.—Her [viz., Caturbhuja-Sitatārā] form has already been described as an emanation of the Dhyāni Buddha Amoghasiddhi. She has four arms and exhibits in the first pair of hands the Utpalamudrā, and the lotus, and the Varada pose in the second. She may be recognized by the presence of two goddesses, Mahāmāyūrī and Mārīcī. [...] Strictly speaking, only those deities can be called Tārās to whom the mantra: “oṃ tārā tuttāre ture svāhā” is assigned. [...] From the colour of the different Tārās it will be possible to refer them [viz., Caturbhuja] to their respective Kulas or families presided over by the five Dhyāni Buddhas.

caturbhuja (चतुर्भुज).—a (S) Four-armed, an epithet or a name of viṣṇu. 2 Having four sides or faces. 3 fig. Having the arms tied behind. v kara, hō. 4 fig. Having a wife.

caturbhuja (चतुर्भुज).—a Four-armed. Having the arms tied behind. v Having a wife.

8) [v.s. ...] of the instructor of (the author of a [commentator or commentary] on [Skanda-purāṇa]) Rāmānanda

Verse 2.260 < [Chapter 2 - The Lord’s Manifestation at the House of Śrīvāsa and the Inauguration of Saṅkīrtana]

3d. The Image of Sarasvatī < [Chapter 5 - Rivers in the Purāṇic Literature]