Capa means something in Hinduism, Sanskrit, Buddhism, Pali, Marathi, Hindi, biology. If you want to know the exact meaning, history, etymology or English translation of this term then check out the descriptions on this page. Add your comment or reference to a book if you want to contribute to this summary article.

Alternative spellings of this word include Chapa. 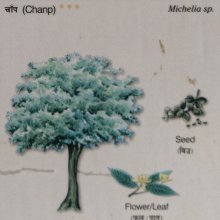 Cāpa (चाप) refers to a weapon (“bow”). It is a Sanskrit word defined in the Dhanurveda-saṃhitā, which contains a list of no less than 117 weapons. The Dhanurveda-saṃhitā is said to have been composed by the sage Vasiṣṭha, who in turn transmitted it trough a tradition of sages, which can eventually be traced to Śiva and Brahmā.

Cāpa (चाप) refers to the “staff (of a flag)”, according to the Bṛhatsaṃhitā (chapter 3), an encyclopedic Sanskrit work written by Varāhamihira mainly focusing on the science of ancient Indian astronomy astronomy (Jyotiṣa).—Accordingly, “If the sun should appear like a pot; he brings on hunger and death; if he should appear broken, the reigning prince dies; if without rays, mankind will be afflicted with fears; if like a gate, then the capital city, if like an umbrella then the country, will perish. If the sun should appear like a flag staff [i.e., dhvaja-cāpa-nibha], or a bow, or quivering or of sharp rays he will bring on wars; if there should appear black lines on his disc the reigning prince will die by the hand of his own minister”.

Cāpa (चाप).—Arc. Note: Cāpa is a Sanskrit technical term used in ancient Indian sciences such as Astronomy, Mathematics and Geometry.

Cāpa (चाप) (Cf. Dhanus) refers to the “bow” and as one of the weapons (attributes) of Goddess Kubjikā symbolizes “the acquisition of control of others”, according to the Manthānabhairavatantra, a vast sprawling work that belongs to a corpus of Tantric texts concerned with the worship of the goddess Kubjikā.—Accordingly, “(Now) I will tell (you about) the great weapons of that (goddess) Kubjikā. [...] A correct knowledge of mantra arises by means of the bell and a correct understanding of the scriptures from the book. Control (of others is acquired) by means of the bow [i.e., cāpa] and the great accomplishment of (all) the weapons in the Mahāmata by means of the skull”.

Cāpa (चाप) refers to a “bow”, according to Sāhib Kaul’s Śārikāstrotra.—Accordingly, “[...] My devotion to you nourishes me every day, as the rise of the full moon always nourishes the ocean. On account of the true affluence of victorious devotion to you I even ignore the excellent Lakṣmī. The whole world consists of you, Goddess of Gods! Your body is consciousness, you are alone and perfectly established. Nowhere is there ignorance. Thus, where do we see the son of a barren woman run and raise his bow (cāpa)? [...]”.

Cāpa (चाप) refers to the “bow” (of Kāma), according to the Śivapurāṇa 2.3.17 (“The dialogue between Indra and Kāmadeva”).—Accordingly, as Kāma said to Brahmā: “[...] O dear friend, I shall cause the downfall of that enemy of yours who is performing a severe penance to usurp your position. [...] I can undoubtedly make Brahmā and Viṣṇu go astray. Others are of no consideration. I shall make even Śiva fall. I have only five arrows that are soft and flowery. My bow is of three types [i.e., cāpa—cāpastridhā]. That too is flowery. The bowstring consists of bees. My support and strength is my beloved wife Ratī. Spring is my minister. O god, I am having five forces. The moon, the storehouse of nectar, is my friend. [...]”.

Cāpa (चाप) refers to a “bow”, according to the Netratantra of Kṣemarāja: a Śaiva text from the 9th century in which Śiva (Bhairava) teaches Pārvatī topics such as metaphysics, cosmology, and soteriology.—Accordingly, [verse 9.19cd-26, while instructing to visualize Sadāśiva in order to worship the formless Amṛteśa]—“[He] resembles the swelling moon, a heap of mountain snow. [...] [Sadāśiva has] a shield, a mirror, a bow (cāpa—spheṭakādarśacāpaṃ ca), a citron tree, and a water jar. At his head is a half moon. [He who meditates of Sadāśiva] should perceive the Eastern face as yellow; the Southern a wrathful, terrible black [that has] an unnatural, tusked mouth. [...]”.

1) Capa in India is the name of a plant defined with Hibiscus rosa-sinensis in various botanical sources. This page contains potential references in Ayurveda, modern medicine, and other folk traditions or local practices It has the synonym Hibiscus rosasinensis L. (among others).

3) Capa in Indonesia is also identified with Blumea balsamifera It has the synonym Conyza appendiculata Blume (etc.).

If you are looking for specific details regarding Capa, for example side effects, chemical composition, extract dosage, diet and recipes, health benefits, pregnancy safety, have a look at these references.

cāpa (चाप).—n A bow. m The lock of a gun. A screw-press; a torturing instru- ment. The lobe of the ear. cāpa lāvaṇēṃ To torment.

8) a [particular] measure of length, [Daśakumāra-carita]

Capa (ಚಪ):—[noun] the stem of any of the woody or treelike tropical and semitropical grasses of the genera Bambusa; a bamboo.

1) [noun] a flexible strip of wood or other material, bent by a string stretched between its ends, for shooting arrows; a bow.

2) [noun] a part of the circumference of a circle; an arc.

3) [noun] a bow or arc of prismatic colours appearing in the heavens opposite the sun and caused by the refraction and reflection of the sun’s rays in drops of rain.

4) [noun] the ninth sign of the zodiac; the Sagittarius.

5) [noun] (astrol.) a condition in which the positions of the nine planets are distributed in all the seven houses from the tenth to fourth houses of the zodiac.

Cāpa (ಚಾಪ):—[noun] a kind of animal the skin of which is processed and used in making percussion instruments.

Search found 25 books and stories containing Capa, Cāpa, Cāpā; (plurals include: Capas, Cāpas, Cāpās). You can also click to the full overview containing English textual excerpts. Below are direct links for the most relevant articles:

Part 46 - The Story of Subhadda, the Wandering Ascetic < [Chapter 40 - The Buddha Declared the Seven Factors of Non-Decline for Rulers]

Other Sources on Vyūhas < [Chapter 4]