Candi means something in Buddhism, Pali, Hinduism, Sanskrit, Jainism, Prakrit, the history of ancient India, Marathi. If you want to know the exact meaning, history, etymology or English translation of this term then check out the descriptions on this page. Add your comment or reference to a book if you want to contribute to this summary article.

Alternative spellings of this word include Chandi. 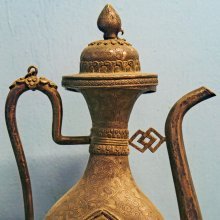 Caṇḍī (चण्डी, “Fierce, Impetuous”):—One of the female offspring from Mahāsarasvatī (sattva-form of Mahādevī). Mahāsarasvatī is one of the three primary forms of Devī, the other two being Mahālakṣmī and Mahākālī. Not to be confused with Sarasvatī, she is a more powerful cosmic aspect (vyaṣṭi) of Devi and represents the guṇa (universal energy) named sattva. Also see the Devī Māhātmya, a Sanskrit work from the 5th century, incorporated into the Mārkaṇḍeya-Purāṇa.

Caṇḍī (चण्डी) refers to one of the thirty-two Bhairavīs (also Dūtis) embodying the syllables of the goddess’s Vidyā, according to the Manthānabhairavatantra, a vast sprawling work that belongs to a corpus of Tantric texts concerned with the worship of the goddess Kubjikā.—The thirty-two Bhairavīs [i.e., Caṇḍī] are the consorts of the Bhairavas presiding over the sonic energies of the thirty-two syllables of her Vidyā. [...] Notice that like there are Yoginīs in this group who are also worshipped independently as the Great Goddess. Moreover, several also appear in other groups.

Caṇḍī (चण्डी) refers to an epithet of the Goddess (e.g., Umā/Durgā/Satī), according to the Śivapurāṇa 2.3.4.—Accordingly, as the Gods eulogized Umā with devotion:—“[...] thus eulogised by the Gods, the Goddess Durgā, the mother of the universe, the destroyer of impassable distress, appeared in front of them. [...] She was the mother of the three deities, Caṇḍī, Śivā, the destroyer of the distress of all, the mother of all supreme slumber and the redeemer of all her own people”.

Caṇḍi (चण्डि) is one of the incarnations of Pārvatī, according to the 10th century Saurapurāṇa: one of the various Upapurāṇas depicting Śaivism.—Accordingly, chapter forty-eight further elaborates the glories of Śiva and Śivadharma; the results of Śiva-worship, glories of Pārvatī who is said to have been incarnated as Durgā, Satī, Kālīkā, Caṇḍi etc. for the establishment of Dharma; the extermination of the demons and the glorification of the worship of the mother-goddess including the description and praise of the Ulkānavamī-vrata are described respectively in chapters forty nine and fifty.

Caṇḍī (चण्डी) is one of the epithets of Durgā, according to the Kathāsaritsāgara, chapter 53. Accordingly, as Vīravara praised Durgā: “... thou art the principle of life in creatures; by thee this world moves. In the beginning of creation Śiva beheld thee self-produced, blazing and illuminating the world with brightness hard to behold, like ten million orbs of fiery suddenly produced infant suns rising at once, filling the whole horizon with the circle of thy arms, bearing a sword, a club, a bow, arrows and a spear. And thou wast praised by that god Śiva in the following words ... [Caṇḍī, etc...]”.

Also, “... when Skanda, and Vasiṣṭha, and Brahmā, and the others heard thee praised, under these [eg., Caṇḍī] and other titles, by Śiva well skilled in praising, they also praised thee. And by praising thee, O adorable one, immortals, Ṛṣis and men obtained, and do now obtain, boons above their desire. ”

The Kathāsaritsāgara (‘ocean of streams of story’), mentioning Caṇḍī, is a famous Sanskrit epic story revolving around prince Naravāhanadatta and his quest to become the emperor of the vidyādharas (celestial beings). The work is said to have been an adaptation of Guṇāḍhya’s Bṛhatkathā consisting of 100,000 verses, which in turn is part of a larger work containing 700,000 verses.

[«previous (C) next»] — Candi in Tibetan Buddhism glossary
Source: academia.edu: The Structure and Meanings of the Heruka Maṇḍala

1) Caṇḍī (चण्डी) refers to the Ḍākinī of the north-western corner in the Medinīcakra, according to the 10th century Ḍākārṇava chapter 15. Accordingly, the medinīcakra refers to one of the three divisions of the dharma-puṭa (‘dharma layer’), situated in the Herukamaṇḍala. Two colors are evenly assigned to the four corner Ḍākinīs [viz., Caṇḍī] in order in accordance with the direction which they face.

2) Caṇḍī (चण्डी) is also the Ḍākinī of the north-western corner in the Kāyacakra, according to the same work. Accordingly, the kāyacakra refers to one of the four divisions of the nirmāṇa-puṭa (‘emanation layer’), situated in the Herukamaṇḍala.

[«previous (C) next»] — Candi in Mahayana glossary
Source: archive.org: Bulletin of the French School of the Far East (volume 5)

Caṇḍī (चण्डी) is the name of a Goddess appointed as one of the Divine protector deities of Kapilavastu, according to chapter 17 of the Candragarbha: the 55th section of the Mahāsaṃnipāta-sūtra, a large compilation of Sūtras (texts) in Mahāyāna Buddhism partly available in Sanskrit, Tibetan and Chinese.—In the Candragarbhasūtra, the Bhagavat invites all classes of Gods and Deities to protect the Law [dharma?] and the faithful in their respective kingdoms of Jambudvīpa [e.g., the Goddesses Caṇḍī and Caṇḍā in Kapilavastu], resembling the time of the past Buddhas.

Caṇḍi (चण्डि) participated in the war between Rāma and Rāvaṇa, on the side of the latter, as mentioned in Svayambhūdeva’s Paumacariu (Padmacarita, Paumacariya or Rāmāyaṇapurāṇa) chapter 57ff. Svayambhū or Svayambhūdeva (8th or 9th century) was a Jain householder who probably lived in Karnataka. His work recounts the popular Rāma story as known from the older work Rāmāyaṇa (written by Vālmīki). Various chapters [mentioning Caṇḍi] are dedicated to the humongous battle whose armies (known as akṣauhiṇīs) consisted of millions of soldiers, horses and elephants, etc.

Caṇḍī (चण्डी) is the name of a Yoginī mentioned in various Jaina manuscripts, often being part of a list of sixty-four such deities. How the cult of the Tantrik Yoginīs originated among the vegetarian Jainas is unknown. The Yoginīs (viz., Caṇḍī) are known as attendants on Śiva or Pārvatī. But in the case of Jainism, we may suppose, as seen before that they are subordinates to Kṣetrapāla, the chief of the Bhairavas.

-ṇḍī 1 A term of endearment applied to one's mistress.

1) [noun] the portion of the human body above the neck; the head.

2) [noun] the grain-bearing spike of a cereal plant; a corn-ear.

1) [noun] the quality of being utterly unyielding in attitude or opinion in spite of all appeals, urgings, etc.; adamancy.

2) [noun] that which issevere, harsh.

5) [noun] a man of great valour and courage.

3) [noun] a small-minded or wicked woman.

1) [noun] the condition of temperature being much lower; the sensation produced by a loss or absence of normal heat; coldness; chillness.

2) [noun] a being moistened, covered or saturated with water; wetness.

Verse 3.12 - The colours of the mountain chains < [Chapter 3 - The Lower World and the Middle World]