Bhumi means something in Buddhism, Pali, Hinduism, Sanskrit, Jainism, Prakrit, the history of ancient India, Marathi, Hindi. If you want to know the exact meaning, history, etymology or English translation of this term then check out the descriptions on this page. Add your comment or reference to a book if you want to contribute to this summary article. 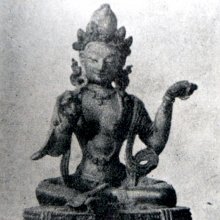 Earth (भूमि, bhūmi) is one of the five primary elements (pañcabhūta) forming the basic components of the world, according to Vāstu-śāstra literature. It is because of the presence and balance of these five elements that our planet thrives with life.

Bhūmi, one of the four classifications of Vāstu, is considered main because it is the first of the elemental principles (bhūta) and a support for the existence of the world (Mayamat, 2.9).

1) Bhūmi (भूमि).—The earth. General. The Purāṇas maintain that Bhūmi has a Devī (goddess). The births of Bhūmi and its basic goddess are in two different ways. (See full article at Story of Bhūmi from the Puranic encyclopaedia by Vettam Mani)

Bhūmi (भूमि).—(also Bhū) Earth personified;1 a Śakti;2 equal to diva in measurement; 150 crores of yojanas; extends in all directions from Meru; wife of Dhruva and mother of Sṛṣṭi; milked as cow by Pṛthu with Cākṣuṣa Manu as calf, by Bṛhaspati for the sages, by the sun for the gods, by Antaka for Pitṛs, by Diti's son for the Asuras, by Vāsuki for the Nāgas, by Rajatanābha for the Yakṣas, by the Rākṣasas and Piśācas; 500 crores in extent.3 Felt the heavy weight of the Asuras and reported to Brahmā in the assemblage of Gods at Meru with special reference to Kaṃsa,. Viṣṇu performed an avatār as Kṛṣṇa to do away with him.4 On the death of Naraka, she appealed to Kṛṣṇa to forgive his inequities and liberate him.5

Bhūmi (भूमि) refers to one of the various kinds of articles used for donation, according to the 10th century Saurapurāṇa: one of the various Upapurāṇas depicting Śaivism.—Accordingly, the tenth chapter contains the praise and classification of donations. It narrates the characteristics of proper recipients and the results of giving different kinds of articles like Bhūmi, Vidyā, Anna, Jala, Tila, Vāsa, Dīpa, Yāna, Śayyā, Dhānya, Aśva, Śāka, Indhana, Chatra, Auṣadha, Go, etc.

Bhūmi (भूमि) is a synonym for adhiṣṭhāna (‘platform’), according to the Kāśyapaśilpa 6.1-2. The word adhiṣṭhāna is Sanskrit technical term referring to the “base” or “platform” on which a structure is built.

Bhūmi (भूमि).—1. Base of a triangle. 2. Earth. Note: Bhūmi is a Sanskrit technical term used in ancient Indian sciences such as Astronomy, Mathematics and Geometry.

Bhūmi (भूमि) or Bhūmī refers to “earth” and is mentioned in a list of 53 synonyms for dharaṇi (“earth”), according to the second chapter (dharaṇyādi-varga) of the 13th-century Raj Nighantu or Rājanighaṇṭu (an Ayurvedic encyclopedia).  The Dharaṇyādi-varga covers the lands, soil [viz., Bhūmi], mountains, jungles and vegetation’s relations between trees and plants and substances, with their various kinds.

[«previous (B) next»] — Bhumi in Hinduism glossary
Source: WikiPedia: Hinduism

Bhūmī-Devī is the personification of Mother Earth. She is the consort of Varaha, an avatar of Vishnu and regarded as the mother of the goddess Sita.

According to the uttara-kanda, when Sita finally leaves her husband Rama, she returns to Bhumidevi. She is the mother of the demon Narakasura. Bhumi Devi is also believed to be one of the two forms of Lakshmi. The other is Sridevi, who remains with Narayana. Bhudevi is the Goddess of Earth, and the fertility form of Lakshmi. She is the daughter of Kashyap Prajapati. According to some she is also Satyabhama, wife of Sri Krishna in Dwapara Yuga and the divine saint Andal. Several female deities have had births similar to Sita.

[«previous (B) next»] — Bhumi in Theravada glossary
Source: Journey to Nibbana: Patthana Dhama

Bhumi means the place where sattas with similar characters arise and dwell.

Bhūmi (भूमि) refers to a group of twelve deities, commonly depicted in Buddhist Iconography, and mentioned in the 11th-century Niṣpannayogāvalī of Mahāpaṇḍita Abhayākara.—In Buddhism the bhūmis are recognized as different spiritual spheres through which a Bodhisattva moves in his quest for Buddha-hood and omniscience. They are recognized as ten in number to which the Vajrayāna added two to make it twelve. As the Bodhisattva progresses in spiritual path, he develops certain special qualities which entitle him to move towards the higher bhūmis. They are arranged one upon another in a regular order with the last at the top which when reached, makes the Bodhisattva equal to a Buddha and he attains omniscience.

These bhūmis (“spiritual spheres”) are not meant for the Hīnayānists but were exclusively designed for the Mahāyānists who are the real Bodhisattvas. No Buddhist will be called a Bodhisattva who has no compassion for suffering humanity or who will not be prepared to sacrifice his all for the benefit of others, The Vajrayānist conception is the same, and it defines bodhi mind as one where śūnya and karuṇā (compassion) work in unison.

Bhūmi (भूमि) or Daśahūmi refers to the “ten stages (of the Bodhisattva)” as defined in the Dharma-saṃgraha (section 64).

The Dharma-samgraha (Dharmasangraha) is an extensive glossary of Buddhist technical terms in Sanskrit (e.g., dhūmi). The work is attributed to Nagarjuna who lived around the 2nd century A.D.

Bhūmi can also refer to the “thirteen stages”, or trayodaśa-bhūmi, which includes the above ten stages as well as the following three:

A technical term made use of in Mahayana tradition and meaning "earth", "level" and more often "stage".

The Ten Bodhisattva Bhūmi are the ten stages on the Mahayana bodhisattva's path of awakening. The Sanskrit term bhūmi literally means "ground" or "foundation". Each stage represents a level of attainment, and serves as a basis for the next one. Each level marks a definite advancement in one's training, that is accompanied by progressively greater power and wisdom.

The bhūmis are subcategories of the Five Paths (pañcamārga, Wylie Tibetan lam lnga):


Passage through the grounds and paths begins with Bodhicitta, the wish to liberate all sentient beings. Aspiring Bodhicitta becomes Engaging Bodhicitta upon actual commitment to the Bodhisattva vows. With these steps, the practitioner becomes a Bodhisattva, and enters upon the paths.

[«previous (B) next»] — Bhumi in Jainism glossary
Source: Encyclopedia of Jainism: Tattvartha Sutra 3: The Lower and middle worlds

Bhumī (भुमी, “land”).—according to the 2nd-century Tattvārthasūtra 3.1, “the lower world (adholoka or naraka) consists of seven ‘lands’ (bhumī) one below the other, surrounded by three kinds of strata (of light and dense air and space)”.

There are seven ‘lands’’ (bhumī) or layers of hell, namely:

These ‘lands’ (in sequential order) are also known as Ghammā, Vaṃsā, Meghā, Aṃjanā, Arista, Maghavī and Māghavī. These seven lands exist in the downward order (one below the other) with Ratnaprabhā being the topmost supported by the cushions of humid atmosphere (ghana), dense air /water (ambu), which rests in a ring of thin /rarified air (vāta) resting in space (ākāśa).

[«previous (B) next»] — Bhumi in India history glossary
Source: Shodhganga: A study of place names of Nalgonda district

Bhumi is one of the terms designating an ‘administrative division’ used in the inscriptions of Andhra Pradesh.—It generally means a particular land measure and sometimes used to designate a territorial division. The bhumi type of divisions were few and far between and were instituted for the first time in Andhra Pradesh by the Kakatiyas, e.g., Sakhali-bhumi.

Bhūmi or Bhūmī.—(EI 3; CII 3), a particular land measure; sometimes also called bhū and regarded as equal to four bhū- māṣakas (cf. bhū). (CII 4), a territorial divison. (EI 7-1-2), ‘one’. Note: bhūmi is defined in the “Indian epigraphical glossary” as it can be found on ancient inscriptions commonly written in Sanskrit, Prakrit or Dravidian languages.

[«previous (B) next»] — Bhumi in Marathi glossary
Source: DDSA: The Molesworth Marathi and English Dictionary

bhūmi (भूमि).—f (S) The earth. 2 The ground. 3 This word will be met with in most of the senses under jamīna. 3 In geometry. The base of a polygon: also base in general.

[«previous (B) next»] — Bhumi in Sanskrit glossary
Source: DDSA: The practical Sanskrit-English dictionary

15) The base of any geometrical figure.

2f) How, by the power of mind, accumulations are gathered < [Part 2 - The essence]

The Two Bhumi Or Stages

Note (2). The ten Bodhisattva grounds or abodes < [Chapter XX - (2nd series): Setting out on the Mahāyāna]

Note (3). The ten grounds shared by adepts of the three vehicles < [Chapter XX - (2nd series): Setting out on the Mahāyāna]