Bhu means something in Hinduism, Sanskrit, Buddhism, Pali, the history of ancient India, Marathi, Jainism, Prakrit, Hindi. If you want to know the exact meaning, history, etymology or English translation of this term then check out the descriptions on this page. Add your comment or reference to a book if you want to contribute to this summary article. 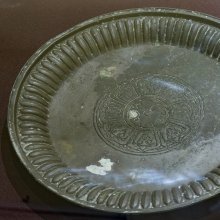 [«previous (B) next»] — Bhu in Natyashastra glossary
Source: archive.org: The mirror of gesture (abhinaya-darpana)

One of the Hands of The Seven Upper Worlds.—Bhu: the Patāka hand twisted upwards is applicable.

Bhū (भू).—(bhūḥ) In the creation of the world, the Lord broke the beginningless "Aṇḍa" (the primal egg or seed) and from it the sound "Oṃ" emerged. The first sound of it was "BHŪḤ"; the second was "BHUVAḤ"; and the third was "SVAḤ". So the combination "Bhūr Bhuvaḥ Svaḥ" was formed. Then came the most adorable and superlative effulgence of the creator (Savitā). That radiance dried up all water. A little of the water became a highly viscous substance. This viscous matter gradually solidified and became the earth. Where the aṇḍa originally was became the source of that supreme effulgence. As it was the first radiant light, it came to be called Āditya (ādi=first). The great procreator Brahmā seemed to emerge from the centre of the aṇḍa. The garbhajala (the water contained in the aṇḍa) became the oceans and rivers of the world. (Vāmana Purāṇa, Chapter 43).

1a) Bhū (भू).—Earth: (Bhūmi) one of the seven worlds; released from Rasātala by Hari in Varāha form, this, Devī worships Hari in that form in Uttara-Kuru;1 when Pṛthu wanted to punish her for scarce supply of food, she trembled and appealed to him to make the ground level plain and milk her with a calf and a pail; was milked by the King, sages, Gods, asuras and others; hilly tracts got levelled, and cities and villages were founded.2 Bhū is said to have given yogic pādukas to Pṛthu.3 presiding deity is Agni; burnt by pralaya fire;4 the measurement of the earth (Pramāṇam) attempted by Haryaśvas (s.v.).5

1b) (Samiti) a Kṛtaloka, the first world; first was said Bhū and then came this world;1 is Pārthiva loka;2 these lokas are burnt by the flames of the seven suns;3 Marīci, Kaśyapa, Dakṣa and other Prajāpatis live here;4 people here live on rice and juice.5

Bhū (भू).—1. Base of a triangle. 2. Earth. Note: Bhū is a Sanskrit technical term used in ancient Indian sciences such as Astronomy, Mathematics and Geometry.

Bhū (भू) refers to “earth” and is mentioned in a list of 53 synonyms for dharaṇi (“earth”), according to the second chapter (dharaṇyādi-varga) of the 13th-century Raj Nighantu or Rājanighaṇṭu (an Ayurvedic encyclopedia).  The Dharaṇyādi-varga covers the lands, soil [viz., Bhū], mountains, jungles and vegetation’s relations between trees and plants and substances, with their various kinds.

Bhū is also a synonym for Deśa (“region”), according to the second chapter (dharaṇyādi-varga) of the 13th-century Raj Nighantu or Rājanighaṇṭu (an Ayurvedic encyclopedia).

Bhū.—(IA 17), a land measure; equal to four bhū-māṣakas. See bhūmi. (EI 9), a land measure or a plot of land. (IE 7-1-2; EI 15, 25), ‘one’. Note: bhū is defined in the “Indian epigraphical glossary” as it can be found on ancient inscriptions commonly written in Sanskrit, Prakrit or Dravidian languages.

[«previous (B) next»] — Bhu in Marathi glossary
Source: DDSA: The Molesworth Marathi and English Dictionary

bhū (भू).—f The earth a Produced from. In Comp.

[«previous (B) next»] — Bhu in Sanskrit glossary
Source: DDSA: The practical Sanskrit-English dictionary

15) To conduct oneself, behave.

11) To change or transform into.

13) To devote or addict oneself to.

2) Earth as one of the nine substances.

8) A symbolical expression for the number 'one'.

9) The base of a geometrical figure.

(-bhūḥ) 1. The earth. 2. Place, site, the place of being or abiding. 3. Landed property. 4. The base of a geometrical figure. 5. Subjectmatter, subject. 6. The number “one.” 7. The first of the three mystical syllables uttered by a Brahmana at the beginning of his daily prayers. 8. Sacrificial-fire. Ind. (bhū) The lowest of the seven hells. E. bhū to be, aff. kvip .

— With the numeral eka, becoming ekī ekī, To unite, Mahābhārata 1, 919

Bhū (भू).—1. bhavati (bhavate), [participle] bhūta (q.v.) become, be ([nominative] or [adverb] in ī or ū), rise, appear, happen, occur; exist, live ([with] na cease to be, perish, die), stay, abide; be possible or suitable; befall, fall to the lot of, belong to ([genetive], [rarely] [dative] or [locative]); serve for, tend or conduce to ([dative] of th.), devote one’s self to, be occupied with ([locative]); get something i.e. thrive, prosper, be lucky (±idam); turn out well, succeed. bhavet may be, granted; bhaṃvatu good, possible, enough of this. [Causative] bhāvayati, te, [participle] bhāvita (q.v.) bring into existence or being, produce, effect, cause; cherish, further, refresh, comfort; practise, exercise; get possessed of, obtain; show, manifest, call to mind, imagine, consider, know, take for (2 [accusative]); convince, convict, state, establish; mingle, mix, saturate, steep. [Desiderative] bubhūṣati (te) wish to become or be, to rise or thrive, endeavour at ([accusative]); like, prefer, honour, esteem. [Intensive] bobhavīti be repeatedly, use to be.

2) —to become, be (with [nominative case], or [adverb] or indeclineable words ending in ī or ū cf. kṛṣṇī-√bhū etc.), arise, come into being, exist, be found, live, stay, abide, happen, occur, [Ṛg-veda] etc. etc. (often used with participles and other verbal nouns to make periphrastical verbal forms; with a [future] p. = to be going or about to e.g. anuvakṣyan bhavati, he is going to recite, [Śatapatha-brāhmaṇa]; the [future] of √bhū with a [perfect tense] p. = a [future] [perfect tense] e.g. kṛtavān bhaviṣyasi, you will have done, [Mahābhārata]; the [perfect tense] [Parasmaipada] babhūva after the syllable ām is put for the [perfect tense] of verbs of the 10th class etc. cf. √1. as and √1. kṛ; the [Ātmanepada] appears in this meaning, [Śiśupāla-vadha ix, 84; Kumāra-sambhava xiv. 46]; observe also bhavati with a [future] tense, it is possible that, e.g. bhavati bhavān yājayiṣyati, it is possible that you will cause a sacrifice to be performed, [Pāṇini 3-3, 146 [Scholiast or Commentator]]; bhavet, may be, granted, admitted, [Kāśikā-vṛtti on Pāṇini 3-2, 114]; bhavatu idem, well, good, enough of this, [Kāvya literature; Hitopadeśa]; iticed bhavet, if this question should be asked, [Manu-smṛti x, 66]; kva tad bhavati, what is to become of this, it is quite useless, [Taittirīya-brāhmaṇa]; with na = to cease to exist, perish, die, [Mahābhārata; Kāvya literature] etc.; with iha na, not to be born on earth, [Mahābhārata]; with śata-dhā, to fall into a hundred pieces, [Mahābhārata]; with dūrataḥ, to keep aloof, [Śārṅgadhara-paddhati]; with manasi or cetasi and [genitive case], to occur to the mind of any one, [Kādambarī]; idem with [genitive case] alone, [Lalita-vistara]);

2) —to fall to the share or become the property of, belong to (cf. ‘esse alicujus’; with [genitive case], rarely [dative case] or [locative case] [according to] to [Vopadeva] also with pari or prati and preceding [accusative]), [Ṛg-veda] etc. etc.;

2) —to be occupied with or engaged in, devote one’s self to (with [locative case]), [Mahābhārata; Kāvya literature];

2) —to cause to be or become, call into existence or life, originate, produce, cause, create, [Purāṇa; Sāhitya-darpaṇa];

2) —to addict or devote one’s self to, practise ([accusative]), [Mahābhārata; Hemacandra’s Yoga-śāstra];

2) —to present to the mind, think about, consider, know, recognize as or take for (two [accusative]), [Mahābhārata; Kāvya literature] etc.;

2) — (with kṣipram), to strive to be quickly possessed, [Mahābhārata];

2) —to want to get on, strive to prosper or succeed, [Taittirīya-saṃhitā; Brāhmaṇa; Mahābhārata];

2) —to want to have, care for, strive after, esteem, honour, [Mahābhārata; Harivaṃśa];

8) the place of being, space, world or universe (also [plural]), [Ṛg-veda; Atharva-veda]

9) the earth (as constituting one of the 3 worlds, and therefore a symbolical Name for the number ‘one’), [Manu-smṛti; Mahābhārata] etc.

14) the base of any geometrical figure, [Āryabhaṭa]

16) a term for the letter l, [Rāmatāpanīya-upaniṣad]

1) Bhū (भू):—bhavati 1. a. irr. To be, to become, to be born. (ka) bhāvayati 10. a. To mix; think; be clear. (ki, ña) bhavati, te; bhāvayati, te 1. 10. c. To obtain. With adhi to rule over. anu to experience, do; abhi to overcome, afflict; ut to be born, preside over; parā to be vanquished; pra be manifest, be equal to, rule; prati to be substituted for; pari to disrespect, surround; vi to see, uphold; prove, have power; saṃ to be possible, contain, overcome, collect; vi and ati to be reciprocally or mutually.

Bhū (भू) in the Sanskrit language is related to the Prakrit words: Ṇivvaḍa, Bhava, Bhū, Hava.

[«previous (B) next»] — Bhu in Hindi glossary
Source: DDSA: A practical Hindi-English dictionary

1) Bhū (भू) in the Prakrit language is related to the Sanskrit word: Bhrū.

Bhū has the following synonyms: Bhūa.

2) [noun] the first of the seven worlds.

3) [noun] (phil.) the earth as one of the five basic elements, representing grossness of the physical objects including the bodies of living beings.

Search found 60 books and stories containing Bhu, Bhū, Bhū°; (plurals include: Bhus, Bhūs, Bhū°s). You can also click to the full overview containing English textual excerpts. Below are direct links for the most relevant articles: