Bhranta means something in Buddhism, Pali, Hinduism, Sanskrit, Marathi. If you want to know the exact meaning, history, etymology or English translation of this term then check out the descriptions on this page. Add your comment or reference to a book if you want to contribute to this summary article. 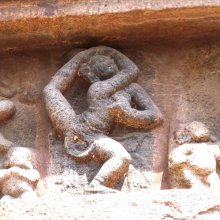 [«previous (B) next»] — Bhranta in Shaivism glossary
Source: Brill: Śaivism and the Tantric Traditions

Bhrānta (भ्रान्त) refers to “confused (thoughts)”, as quoted by Hṛdayaśiva in his Prāyaścittasamuccaya (verse 10.27-35).—Accordingly, “Having recited [a particular mantra] along with [the practice of one of the] observances in accordance with the rules, and having bathed [at the end of the observance], one may recite that mantra for attaining supernatural powers. The skilled practitioner should do his recitation not too slowly, not indistinctly, not without taking [the meaning of what he recites] in, not too fast, not without counting, and not with his thoughts in confusion (manas-bhrānta). [...]”.

[«previous (B) next»] — Bhranta in Buddhist philosophy glossary
Source: Wisdom Experience: Mind (An excerpt from Science and Philosophy)

Bhrānta (भ्रान्त) refers to “mistaken (cognitions)”.—The Indian Buddhist tradition contains an enormous amount of material simply on the question of epistemic reliability, especially in the context of a valid cognition (pramāṇa), which is both reliable and also a motivator of action. The foundational question of epistemic reliability leads to many other nuanced and subtle inquiries that produce the taxonomies in this section of part 1. One intriguing distinction that emerges in these taxonomic analyses is the notion that epistemic reliability can still apply to cognitions that are “mistaken” (bhrānta). Well-formed inferences, for example, are always epistemically reliable, but since they are necessarily conceptual, they are also mistaken. [...]

[«previous (B) next»] — Bhranta in Marathi glossary
Source: DDSA: The Molesworth Marathi and English Dictionary

[«previous (B) next»] — Bhranta in Sanskrit glossary
Source: DDSA: The practical Sanskrit-English dictionary

1) Wandered or roamed about.

5) Moving about, moving to and fro, wheeling.

6) Whirling or turning round, roaming or wandering about.

3) A particular mode of fighting.

3) [v.s. ...] wandered about or through (n. [impersonal or used impersonally] with [instrumental case], ‘it has been wandering about by’), [Śārṅgadhara-paddhati; Kathāsaritsāgara]

1) [noun] he who roams or has roamed aimlessly.

5) [noun] an elephant that is sexually excited or in anger.

6) [noun] a particular kind of kissing (as a foreplay arousing sexual desire).

7) [noun] (dance.) a breathing very slowly as if holding it for a while (as in meeting one’s lover for the first time).

Chapter 10 - The Defects of the House