Bhramari means something in Buddhism, Pali, Hinduism, Sanskrit, Jainism, Prakrit. If you want to know the exact meaning, history, etymology or English translation of this term then check out the descriptions on this page. Add your comment or reference to a book if you want to contribute to this summary article. 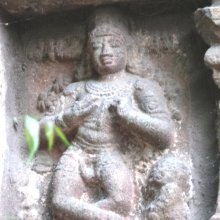 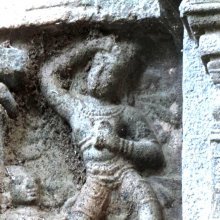 “During the sixtieth era there will be one demon, called Aruṇa who will do much harm to men and sages. Then I shall appear in bee-form incorporating unnumerable bees, and I shall slay the mighty demon and rescue the three worlds. From then on people will praise me for ever and address me as Bhrāmarī.” (see the Lakṣmī-tantra 9.41-43, called “The exclusive incarnations of Śakti”)

[«previous (B) next»] — Bhramari in Yoga glossary
Source: Google Books: The Khecarividya of Adinatha

Bhrāmarī (भ्रामरी, “like a bee”).—One of the names of the Goddess, Devī, who is regarded as the female principle of the divine; the embodiement of the energies of the Gods.

1) Bhramarī (भ्रमरी) refers to a one of the thirty-two cārīs, according to the Nāṭyaśāstra chapter 11. The Bhramarī-cārī is classified as a ākāśikī, or “aerial”, of which there are sixteen in total. The term cārī  refers to a “dance-step” and refers to the simultaneous movement of the feet (pāda), shanks (jaṅghā) and the hip (ūru). From these cārīs proceed dance as well as movements in general.

(Instructions of Bhramarī): the foot in the Atikrāntā Cārī to be thrown up and the entire body turned round (lit. the Trika turned round) and then the second foot to be moved on its sole.

2) Bhramarī (भ्रमरी) is the name of a meter belonging to the Pratiṣṭhā or Supratiṣṭhā class of Dhruvā (songs) described in the Nāṭyaśāstra chapter 32:—“the metre which has in its feet of four syllables the first two short and the next two long, is bhramarī”.

Bhramari (भ्रमरि) refers to “circling movements” and represents one of the four “movements of the feet” (pāda) according to the Abhinayadarpaṇa. The third division is the bhramari-bheda, which relates to whirls and this portion.

[«previous (B) next»] — Bhramari in Chandas glossary
Source: Shodhganga: a concise history of Sanskrit Chanda literature

Bhramarī (भ्रमरी) is the name of a Sanskrit metre (chandas) defined by Bharata, to which Hemacandra (1088-1173 C.E.) assigned the alternative name of Sumatī in his auto-commentary on the second chapter of the Chandonuśāsana. Hemacandra gives these alternative names for the metres by other authorities (like Bharata), even though the number of gaṇas or letters do not differ.

1) Bhramarī (भ्रमरी) is another name for Jantukā, a medicinal plant possibly identified with Ferula foetida (asafoetida) from the Apiaceae or “celery” family of flowering plants, according to verse 3.126-129 of the 13th-century Raj Nighantu or Rājanighaṇṭu. The third chapter (guḍūcyādi-varga) of this book contains climbers and creepers (vīrudh). R. N. Soḍhal considers Jantukā as Hiṅgu (Ferula foetida Regel Umbelliferae/Apiaceae). Raghuvīr Prasāda Trivedī considers Jantukā a parasitic creeper (vṛkṣaruhā); the fruits are like Kapikacchu, thus he identifies it with Cuscuta chinensis Lank. (Convolvulaceae), a plant used in Vietnam as Tho ty tu. Chopra identifies Jantukā with Garcinia lucida Roxb. Vaidyaka Śabda Sindhu equates it with Lākṣā. Together with the names Bhramarī and Jantukā, there are a total of twenty-one Sanskrit synonyms identified for this plant.

1) Bhramarī (भ्रमरी) is the name of Dūtī (i.e., messengers of Lord Vajrapāṇi) mentioned as attending the teachings in the 6th century Mañjuśrīmūlakalpa: one of the largest Kriyā Tantras devoted to Mañjuśrī (the Bodhisattva of wisdom) representing an encyclopedia of knowledge primarily concerned with ritualistic elements in Buddhism. The teachings in this text originate from Mañjuśrī and were taught to and by Buddha Śākyamuni in the presence of a large audience (including Bhramarī).

[«previous (B) next»] — Bhramari in Jainism glossary
Source: archive.org: Trisastisalakapurusacaritra

Bhrāmarī (भ्रामरी) is the name of a vidyā, according to chapter 5.1 [śāntinātha-caritra] of Hemacandra’s 11th century Triṣaṣṭiśalākāpuruṣacaritra (“lives of the 63 illustrious persons”): a Sanskrit epic poem narrating the history and legends of sixty-three important persons in Jainism.

Accordingly, as Aśanighoṣa said to Muni Balabhadra:—“Sutārā was not kidnapped by me, while she was occupying her own home, like a lotus by an elephant, with evil intention. But, formerly I had gone from the city Camaracañcā to the temple of the Blessed Muni Jayanta and there I, reciting something like a bee, and fasting for seven days, had subdued the vidyā Bhrāmarī. [...]”.

2) [noun] a toy, inversely conical, with a point on which it is made to spin with the help a string or cord; a top.

3) [noun] a turning or spinning motion of a body around a center.

4) [noun] the act of turning (something) or causing to revolve around some other thing.

5) [noun] a yogic exercise in which the inhaled air is retained for sometime within.

6) [noun] (dance.) a moving round on the sole of one foot, throwing up the other foot with thigh being lifted.

7) [noun] a kind of mystical accomplishment.

Search found 14 books and stories containing Bhramari, Bhramarī, Bhrāmarī; (plurals include: Bhramaris, Bhramarīs, Bhrāmarīs). You can also click to the full overview containing English textual excerpts. Below are direct links for the most relevant articles: