Bhramaraka means something in Hinduism, Sanskrit. If you want to know the exact meaning, history, etymology or English translation of this term then check out the descriptions on this page. Add your comment or reference to a book if you want to contribute to this summary article. 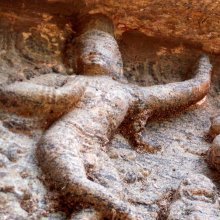 [«previous (B) next»] — Bhramaraka in Sanskrit glossary
Source: DDSA: The practical Sanskrit-English dictionary

-kaḥ, -kam 1 A lock of hair or curl hanging down on the forehead.

2) A ball for playing with.

2) [noun] the curly hair dangling on the forehead.

3) [noun] water moving rapidly in a circle so as to produce a depression in the center into which floating objects may be drawn; a whirlpool.

4) [noun] a top (a conical toy) that makes continuous jarring sound, while spinning.

Search found 3 books and stories containing Bhramaraka; (plurals include: Bhramarakas). You can also click to the full overview containing English textual excerpts. Below are direct links for the most relevant articles: