Bhisa Jataka means something in Buddhism, Pali. If you want to know the exact meaning, history, etymology or English translation of this term then check out the descriptions on this page. Add your comment or reference to a book if you want to contribute to this summary article. 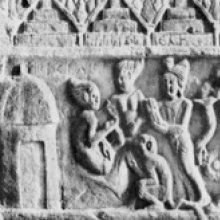 Once the Bodhisatta, was born into a family which had eighty crores. He was called Maha Kancana and had six younger brothers (the eldest of them being Upakancana) and a sister, Kancanadevi. None of them would marry, and, on the death of their parents, they distributed their wealth, and, together with a servant man and maid, they went into the Himalaya and became ascetics, gathering wild fruits for food. Later, they agreed that Maha Kancana, Kancanadevi and the maid should be spared the task of collecting fruit and that the others should do this in turn. Each day the fruits collected were divided into lots and the gong was sounded. The ascetics would then come one by one and take each his or her share. By the glory of their virtues, Sakkas throne trembled. In order to test them, for three days in succession he caused Maha Kancanas share to disappear. On the third day, Maha Kancana summoned the others and asked the reason for this. Each protested his innocence and swore an oath that heavy curses should attend them if any were guilty of stealing so much as a lotus stalk (bhisa). In each case punishment was to be that in their next birth they should have lands, possessions and other encumbrances - which, from an ascetics point of view, would be a grievous thing. At this gathering were also present the chief deity of the forest, an elephant escaped from a stake, a monkey who had once belonged to a snake charmer, and Sakka, who remained invisible. At the end of their protestations of innocence, Sakka inquired of Maha Kancana why they all so dreaded possessions; on hearing the explanation, he was greatly moved and asked pardon of the ascetics for his trick.

The story was related in the same circumstances as the Kusa Jataka (q.v.).

Search found 2 books and stories containing Bhisa Jataka, Bhisa-jātaka; (plurals include: Bhisa Jatakas, jātakas). You can also click to the full overview containing English textual excerpts. Below are direct links for the most relevant articles:

(7) Seventh Pāramī: The Perfection of Truthfulness (sacca-pāramī) < [Chapter 6 - On Pāramitā]