Bhata means something in Hinduism, Sanskrit, Buddhism, Pali, the history of ancient India, Marathi, Hindi, biology. If you want to know the exact meaning, history, etymology or English translation of this term then check out the descriptions on this page. Add your comment or reference to a book if you want to contribute to this summary article. 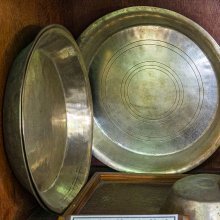 [«previous (B) next»] — Bhata in Arthashastra glossary
Source: Shodhganga: Kakati Ganapatideva and his times (artha)

Bhaṭa (भट, “guards”) represents one of the members that makes up the jury of a law court, according to Brihaspati.

Bhaṭa.—(IE 8-3; CII 3, 4; EI 30; HD), same as Bhaṭa- manuṣya; probably derived from bhṛta which is sometimes used in its place. Generally used along with cāṭa or chātra; literally, ‘a soldier’; but really a Pāik, Barkandāz or Piāda, i. e. a constable. It is spelt as bhaṭṭa in the medieval inscriptions of Eastern India, though rarely the two are distinguished. See Bhaṭṭa. (SITI), a personal servant or soldier. Note: bhaṭa is defined in the “Indian epigraphical glossary” as it can be found on ancient inscriptions commonly written in Sanskrit, Prakrit or Dravidian languages.

Bhata in India is the name of a plant defined with Crotalaria burhia in various botanical sources. This page contains potential references in Ayurveda, modern medicine, and other folk traditions or local practices It has the synonym Crotalaria burhia var. tomentosa Boiss..

If you are looking for specific details regarding Bhata, for example chemical composition, pregnancy safety, extract dosage, health benefits, side effects, diet and recipes, have a look at these references.

[«previous (B) next»] — Bhata in Marathi glossary
Source: DDSA: The Molesworth Marathi and English Dictionary

bhāṭa (भाट).—m ( H) A class of people or an individual of it. They are minstrels or bards. 2 fig. An empty chatterer.

bhāṭa (भाट).—f n A place in the sea or a river which appears at low water; a shoal, shallow, sand- bank. 2 n C also bhāṭalēṃ n C An elevated and level spot occurring in arable land; dry therefore and fit only for the inferior grains. 3 f C Ground prepared for sugarcane: also a plantation of sugarcanes.

bhātā (भाता).—m (bhastrā S) A bellows. v phuṅka. 2 A quiver. 3 A kind of leather-bag in which soldiers and travelers carry their cooking utensils &c. 4 Skin peeling off, a scab. 5 ( H) Vulgar for bhattā.

[«previous (B) next»] — Bhata in Sanskrit glossary
Source: DDSA: The practical Sanskrit-English dictionary

3) An outcast, a barbarian.

5) Name of a degraded tribe.

6) [v.s. ...] [plural] Name of a degraded tribe, [cf. Lexicographers, esp. such as amarasiṃha, halāyudha, hemacandra, etc.] (cf. bhaṭṭa, bhaḍa, bhaṇḍa; according to some ‘a person whose father is a Brāhman and whose mother is a Naṭī’)

[«previous (B) next»] — Bhata in Hindi glossary
Source: DDSA: A practical Hindi-English dictionary

4) Bhāta (भात) [Also spelled bhat]:—(nm) boiled rice; presents (on special occasions given to daughters, nieces, etc.); —[denā] to send presents etc.; to have to arrange feast (as a punishment).

1) [noun] a man employed in royal courts to herald the titles of a king.

2) [noun] a man who praises another insincerely, with an intention to get an advantage.

4) [noun] a man whose profession is worshipping a god in a temple or conducting religious rites.

5) [noun] a person whose profession is cooking; a cook.

2) [noun] a person who serves in an army; a person engaged in military service; a soldier.

1) [noun] money paid to an employee for work done; wages.

2) [noun] a sum of money paid for the temporary possession or use of a house, land, etc.; rent.

1) [noun] a man employed in royal courts to herald the titles of a king.

2) [noun] a man who praises another insincerely, with an intention to get an advantage.

Puppetry in Assam (by Gitali Saikia)