Bhaktapura means something in Hinduism, Sanskrit, the history of ancient India. If you want to know the exact meaning, history, etymology or English translation of this term then check out the descriptions on this page. Add your comment or reference to a book if you want to contribute to this summary article. 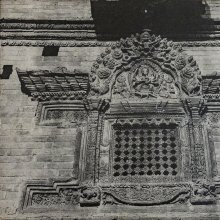 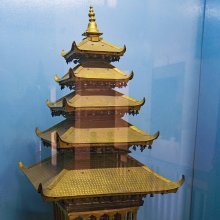 [«previous (B) next»] — Bhaktapura in Purana glossary
Source: archive.org: Nepal, the birth place of Kalidas

Bhaktapura is the name of an ancient city in Nepal where once was the Phulchoki forest.—The forest of Ambika, where Sudimna (Sudyumna) had been Changed into a woman named Illa (Ila), is near Bhaktapura. The forest is known a Phulchoki. The son of Ila was Pururaba (Pururava), who fell in love with Urvashi.

Source: archive.org: Nepali Its Language And Literature by Dharmaditya

Bhaktapura (भक्तपुर) or Khopadeśa is the only town where Shaivite manuscripts have been recovered in abundance, while the two main towns of Kāntipura (Kathmandu) and Aśoka-pattana abound in Nepali works on Buddhism.—Most of the manuscripts are written on palmyra leaves and on yellow-painted Nepali plant paper. To make them worm-proof, they use orpiment with flour paste which is applied on the paper and dried up and levelled with a heavy weight.

Bhaktapura (Bhaktapur) is another name for Bhadgaun, an ancient kingdom of Nepal.—Despite the fact that parts of the town had been known for quite some time before, the actual “founding” under its present name of Bhadgaun or Bhaktapur only happened in the year 889 A.D. It is said that Raja Ananda Malla founded the town in the shape of Shiva’s drum Damaru.

Bhaktapura (Bhatgaon) is one of the three ancient kingdoms of Neplal.—It is noticeable that among the three principal cities in the Valley, Bhaktagrāma (Bhatgaon), also called Bhaktapura or Dharmapaṭṭana, distinguished itself as a center of predominantly Hindu pursuits, while Lalitapaṭṭana (Patan) favored Buddhist texts, and scholars residing at Kāntipura (Kathmandu) devoted themselves to the interpretation of Buddhist as well as of Hindu works.

No search results for Bhaktapura, Bhakta-pura; (plurals include: Bhaktapuras, puras) in any book or story.