Bhagavat means something in Buddhism, Pali, Hinduism, Sanskrit, the history of ancient India, Marathi, Hindi. If you want to know the exact meaning, history, etymology or English translation of this term then check out the descriptions on this page. Add your comment or reference to a book if you want to contribute to this summary article. 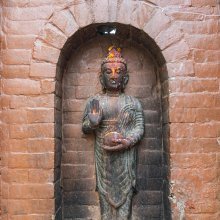 The term Bhagavān indicates the one who possesses Bhaga—the ṣaḍguṇas, or the group of six blessed qualities. They are

Source: Universität Wien: Sudarśana's Worship at the Royal Court According to the Ahirbudhnyasaṃhitā

Bhagavat (भगवत्) refers to the “Lord”, according to the Ahirbudhnyasaṃhitā, belonging to the Pāñcarātra tradition which deals with theology, rituals, iconography, narrative mythology and others.—Accordingly, “[...] A Brāhmaṇa who is not supported may not act with it (i.e. the kriyāśakti) in this world. But he may perform with it for the good of the world, having first relied upon the King. For the King is the Supreme Being, he embodies all Gods and is all-pervading. He is the base (adhiṣṭhāna) of the Creative Energy belonging to Viṣṇu, and embodies the Lord (bhagavat-maya). [...]”.

Bhagavat (भगवत्) refers to “primordial Goddess” and is used to describe the Goddess (Devī), according to the Śivapurāṇa 2.2.12. Accordingly as Brahmā narrated to Nārada:—“[...] with various sorts of prayer [Dakṣa] eulogised and bowed to the Goddess (Devī) mother of the universe, [...] Be pleased, O primordial Goddess (bhagavat), be pleased, O Goddess in the form of Śiva; be pleased, O bestower of boons to the devotees; obeisance be to Thee, O wielder of illusion over the universe.”.

1a) Bhagavān (भगवान्).—The principal and eternal god;^1 the sum and substance of the three Vedas; bha.— cherisher and supporter of the universe; ga,—the leader or creator; bhaga indicates six properties, dominion, might, glory, splendour, wisdom and detachment; va, elemental spirit in which all beings exist and which exists in all beings; thus it is the name of Vāsudeva.*

1c) The quality of bhaga and sadbhāva.*

Bhagavan (भगवन्, “holy one”) refers to a specific “mode of address” (nāman) used in drama (nāṭya), according to Nāṭyaśāstra chapter 19. Bhagavan is used to address the Gods and certain ascetics.

[«previous (B) next»] — Bhagavat in Hinduism glossary
Source: Red Zambala: On the Salvific Activities of God

The 6 attributes of the Lord (Bhagavān) that relate to sentient beings are:

It is because of these six that He is called ‘Bhagavān.’

[«previous (B) next»] — Bhagavat in Tibetan Buddhism glossary
Source: academia.edu: A Critical Sanskrit Edition and a Translation of Kambala’s Sādhananidhi, Chapter 8

Bhagavat (भगवत्) is the name of a deity associated with the syllable “hūṃ” of the Heart Mantra of Heruka (hṛdayamantra): one of the four major mantras in the Cakrasaṃvara tradition, as taught in the eighth chapter of the 9th-century Herukābhidhāna and its commentary, the Sādhananidhi.  The Hṛdaya-mantra consists of twenty-two letters. [...] A practitioner in meditation visualizes that twenty-two deities [viz., Bhagavat] are developed from the twenty-two letters constituting the mantra. Each letter of the mantra is used as the initial letter of each deity’s name except for the first and second deities, who are the chief couple deities and located at the center of the maṇḍala.

Bhagavat (भगवत्) is a synonym for the Buddha according to the 2nd century Mahāprajñāpāramitāśāstra (chapter IV).

1) In the word Bhagavat, bhāga means quality (guṇa) and vat indicates its possession: “the one who possesses qualities”.

2) Bhāga means to analyze (vibhāga) and vat indicates skill (kuśala). Skillful in analyzing the general and specific characteristics (svasāmānyalakṣaṇa) of the dharmas, he is called Bhagavat.

3) Bhāga means glory (yaśas-) and vat indicates its possession. Thus this word means “the one who possesses glory”. No-one else has as much glory as the Buddha. The noble Cakravartin kings, Indra, Brahmā, the Lokapālas, are inferior to the Buddha. What then could be said of ordinary men (pṛthagjana)?

4) Bhāga means to crush (bhaṅga) and vat indicates the ability. The person who can crush desire (rāga), hatred (dveṣa) and stupidity (moha) is called Bhagavat.

[«previous (B) next»] — Bhagavat in Buddhism glossary
Source: Buddhist Door: GlossaryThere are many different meanings: one who possesses auspicious signs, one who destroys illusions evil, one who is provided with such auspicious virtues of freedom as the law, fame, good signs, desire and diligence, one who has completely understood the Four Noble Truths, one who receives and keeps various excellent practices, one who has abandoned the wandering of transmigration.

[«previous (B) next»] — Bhagavat in Marathi glossary
Source: DDSA: The Molesworth Marathi and English Dictionary

Bhagavān (भगवान्).—m The Supreme Being, God.

[«previous (B) next»] — Bhagavat in Sanskrit glossary
Source: DDSA: The practical Sanskrit-English dictionary

Bhagavat (भगवत्).—mfn. (-vān-vatī-vat) Respectable, worshipful, adorable, and hence the common appellative of a prince or deity. m. (-vān) One of the generic titles of a Jina or Jaina deified sage. f. (-vatī) 1. A name of Gauri. 2. Any goddess. E. bhaga fortune, supremacy, &c., and matup poss. aff.

Bhagavat (भगवत्) in the Sanskrit language is related to the Prakrit word: Bhaṃta.

[«previous (B) next»] — Bhagavat in Hindi glossary
Source: DDSA: A practical Hindi-English dictionary

1) [noun] a rspectful term used in addressing a deity or reverential man.

Verse 10.17 < [Chapter 10 - Vibhūti-yoga (appreciating the opulences of the Supreme Lord)]

3b) Actually arousing bodhicitta < [Part 3 - The liturgy of receiving]

Part 3d.2e - The perfect retinue < [B. The explanation of the kayas and wisdoms]