Bhadrasana means something in Hinduism, Sanskrit, Jainism, Prakrit, the history of ancient India, Marathi. If you want to know the exact meaning, history, etymology or English translation of this term then check out the descriptions on this page. Add your comment or reference to a book if you want to contribute to this summary article. 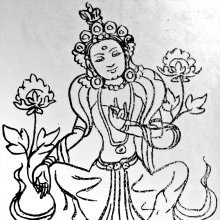 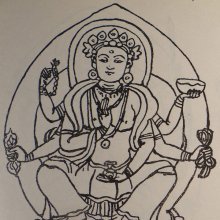 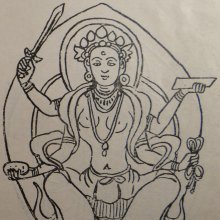 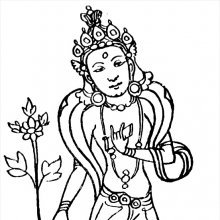 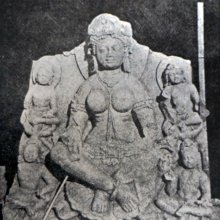 Bhadrāsana (भद्रासन) refers to a type of Āsana (sitting poses), according to Ganapati Sthapati in his text Ciṟpa Cennūl, as defined according to texts dealing with śilpa (arts and crafs), known as śilpaśāstras.—In the bhadrāsana, the heels of the legs, which cross each other, are placed under the testes and the hands hold the two big toes of the feet.

Rao describes four types of āsanas or pīṭhas, viz., bhadrapīṭha (bhadrāsana), kūrmāsana, pretāsana and siṃhāsana. The height of the first is divided into 16 parts, of which one forms the thickness of the upana or the basal layer; four, of the jagati or the next higher layer; three, of the kumuda; one, of the pattika; three, of the kantha; one, of the second pattika; two, of the broader mahāpattika; and one, of the ghṛtavari, the top-most layer. The bhadrāsana of an image does not seem to have been such an elaborate āsana or pītā.

Bhadrāsana (भद्रासन) is one of the eighty-four āsanas (postures) taught by Śiva, according to the Haṭharatnāvalī 3.7-20. It is said that Ādinātha (Śiva) hand-picked 84 yoga postures from 84,00,000 living beings and taught them for the purpose of introducing physical health and well-being to the human body. The compound bhadrāsana translates to bhadra (good fortune) and āsana (posture).

The 17th-century Haṭharatnāvalī is a Sanskrit reference book dealing with these āsanas (e.g., bhadrāsana) which form a major constituent of the haṭhayoga practice. It was written by Śrīnivāsa.

Bhadrāsana (भद्रासन) refers to an āsana (posture) taught by Śiva. It is one of the first four out of 84 total, thus one of the most essential, according to Haṭhayogapradīpikā I.55-60.—Accordingly, “Place the heels on either side of the seam of the Perineum, keeping the left heel on the left side and the right one on the right side, hold the feet firmly joined to one another with both the hands. This bhadrāsana is the destroyer of all the diseases”.

Also, “The expert Yogīs call this gorakṣāsana. By sitting with this āsana, the Yogī gets rid of fatigue. The nādis should be cleansed of their impurities by performing the mudrās, etc., (which are the practices relating to the air) āsanas, Kumbhakas and various curious mudrās.”

The 15th-century Haṭhayogapradīpikā by Svātmārāma is one of the oldest extant texts dealing with haṭhayoga: an ancient form of meditation founded by Matsyendranātha. The first chapter of this book describes various āsanas (e.g., bhadra-āsana).

Bhadrāsana (भद्रासन) is a type of standing posture (āsana), according to verse 77 of the Śrītattvanidhi.—Accordingly, “Place the left ankle on the right side of the perineum and the righton the left side of the perineum. Hold the sides of the feet firmly with the two hands. This is bhadrāsana, the fortunate āsana”.

The 19th-century Śrītattvanidhi is a sanskrit treatise describing 80 primary āsanas, or ‘posture’ (e.g., bhadra-āsana) and several additional ones.

Bhadrāsana (भद्रासन) is one of the thirty-two āsanas (postures) taught in the second chapter of the Gheraṇḍasaṃhitā: “Carefully placing the ankles in the reverse manner under the scrotum; crossing the hands behind the back holding the big toes and adopting the Jālandhara (bandha), one should gaze at the tip of the nose This is Bhadrāsana which destroys all diseases”.

Bhadrāsana is one of the selected 32 postures amongs 8,400,000 total mentioned by Śiva, according to Gheraṇḍasaṃhitā 2.1-2, “In all, there are as many Āsanas as species of animals. Eighty-four lacs of them are mentioned by Śiva. Out of them, 84 are regarded as important and among these 84, again 32 are good (enough) in this world of mortal beings”.

The 17th-century Gheraṇḍasaṃhitā (mentioning bhadra-āsana) is one of the three classic texts of Haṭha-yoga: a major branch of Yoga, sharing similarities with the Yoga system taught by Patañjali, though claiming its own mythical founder known as Matsyendranātha. This gheraṇḍa-saṃhitā is an encyclopedic Sanskrit treatise describing thirty two such āsanas.

[«previous (B) next»] — Bhadrasana in Shaktism glossary
Source: academia.edu: The Śāradātilakatantra on Yoga

Bhadrāsana (भद्रासन) refers to one of the five āsanas (postures) explained by Lakṣmaṇadeśika in his 11th-century Śaradātilaka verse 25.13-14ab.—“He should place both ankles very firmly on either side of the perineum; he should hold the two heels of [his] feet steady with both hands below the scrotum. [Thus is] taught the auspicious posture (bhadrāsana); it is highly honoured by Yogins”.

[«previous (B) next»] — Bhadrasana in Jainism glossary
Source: archive.org: Trisastisalakapurusacaritra

1) Bhadrāsana (भद्रासन) refers to the “throne” and represents one of the “eight auspicious thins” in Jainism, according to chapter 1.2 [ādīśvara-caritra] of Hemacandra’s 11th century Triṣaṣṭiśalākāpuruṣacaritra (“lives of the 63 illustrious persons”): a Sanskrit epic poem narrating the history and legends of sixty-three important persons in Jainism.

Accordingly: “[...] Then, after circumambulating it, he ascended his aerial car, like his own lofty pride, by the east steps. [...] Then Śakra’s Śāmānikas, like other forms of Śakra, ascended by the north steps and took their proper seats. [...] In front of the Lord of Paulomī (Śakra) seated on the lion-throne shone eight groups of the eight auspicious things, [viz., bhadrāsana], etc. [...]”.

2) Bhadrāsana (भद्रासन) or simply Bhadra is the name of a posture (āsana), according to chapter 2.1.—Accordingly, “the elephant of kings (i.e., Vimalavāhana) dismounted from the elephant’s shoulder and entered the garden, like a lion a mountain-cave. [...] He saw monks there, too, some in the [viz., bhadrāsana-posture, ...] some engaged in kāyotsarga, and some in ukṣa-posture, indifferent to the body, who had carried out their vows in the midst of numerous attacks, like soldiers in battles, victorious over internal enemies, enduring trials, powerful from penance and meditation [...] The King, with devotion sprouted in the guise of horripilation, as it were, approached Ācārya Arindama and paid homage to him”.

Bhadra-asana.—(EI 25), a throne. Note: bhadra-asana is defined in the “Indian epigraphical glossary” as it can be found on ancient inscriptions commonly written in Sanskrit, Prakrit or Dravidian languages.

[«previous (B) next»] — Bhadrasana in Marathi glossary
Source: DDSA: The Molesworth Marathi and English Dictionary

bhadrāsana (भद्रासन).—n S (Happy or fortunate seat.) A throne. 2 A posture of devotees.

[«previous (B) next»] — Bhadrasana in Sanskrit glossary
Source: DDSA: The practical Sanskrit-English dictionary

1) a chair of state, splendid seat, a throne.

2) a particular posture in meditation.

Bhadrāsana is a Sanskrit compound consisting of the terms bhadra and āsana (आसन).

Bhadrāsana (भद्रासन).—n. 1. a throne. 2. a peculiar posture, in which abstract meditation is performed by a devotee.

Bhadrāsana is a Sanskrit compound consisting of the terms bhadra and āsana (आसन).

2) [v.s. ...] a [particular] posture of a devotee during meditation, [Sarvadarśana-saṃgraha]