Baliharana means something in Buddhism, Pali, Hinduism, Sanskrit, Marathi. If you want to know the exact meaning, history, etymology or English translation of this term then check out the descriptions on this page. Add your comment or reference to a book if you want to contribute to this summary article. 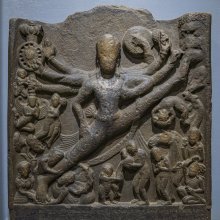 A forest tract (vanasanda) near Kusinara where the Buddha is said to have stayed (A.i.274;v.79). It was so called because the people there made offerings to various spirits (AA.i.457; MA.ii.826). The Kinti Sutta was preached there (M.ii.238).

[«previous (B) next»] — Baliharana in Marathi glossary
Source: DDSA: The Molesworth Marathi and English Dictionary

baḷīharaṇa (बळीहरण).—n (baliharaṇa S) A circular āhuti (offering of rice &c.) to the divinities daily. This is placed on the ground in contrad. from vaiśvadēva (offering to agni) which is cast into the fire. 2 fig. Writing all round the margin of a book (by way of comment or of correction of errors). v ghāla. baḷēṃ ad (baḷa) By force or violence; by compulsion. 2 Whether with or without reason; determinedly. 3 or baḷēñca With strenuous efforts; by vehement exertion.

[«previous (B) next»] — Baliharana in Sanskrit glossary
Source: DDSA: The practical Sanskrit-English dictionary

Baliharaṇa is a Sanskrit compound consisting of the terms bali and haraṇa (हरण).

1) [noun] an offering of the life of an animal to semi-divine beings, household divinities, spirits, etc.

2) [noun] that part of the food which is offered to gods and manes, at the end of worshipping; ಬಲಿಹರಣ ಮಾಡು [baliharana madu] baliharaṇa māḍu to sacrifice an animal as an oblation to a deity, deamon, etc.