Bahumati means something in Buddhism, Pali, Hinduism, Sanskrit, the history of ancient India. If you want to know the exact meaning, history, etymology or English translation of this term then check out the descriptions on this page. Add your comment or reference to a book if you want to contribute to this summary article. 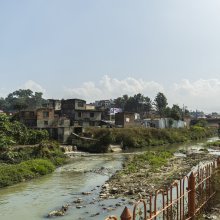 Bāhumatī (बाहुमती) and Bāhukā are rivers situated in Majjhimadesa (Middle Country) of ancient India, as recorded in the Pāli Buddhist texts (detailing the geography of ancient India as it was known in to Early Buddhism).—In the Majjhima Nikāya we are told that while Bāhukā, Sundarikā, Sarasvatī and Bāhumatī were rivers, Gayā and Payāga were tīrthas only, or ghats on the Ganges. As regards Bāhumatī, an identification may be suggested with Bāgmatī, a sacred river of the Buddhists in Nepal. Bāgmatī is called Bachmati as it was created by the Buddha Krakucchanda by word of mouth during his visit of Nepal.

[«previous (B) next»] — Bahumati in Sanskrit glossary
Source: DDSA: The practical Sanskrit-English dictionary