Ashiva means something in Hinduism, Sanskrit, Jainism, Prakrit, Hindi. If you want to know the exact meaning, history, etymology or English translation of this term then check out the descriptions on this page. Add your comment or reference to a book if you want to contribute to this summary article.

The Sanskrit term Aśiva can be transliterated into English as Asiva or Ashiva, using the IAST transliteration scheme (?).

Alternative spellings of this word include Ashiv. 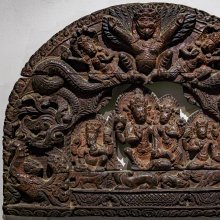 Aśiva (अशिव) refers to “one who is inauspicious”, according to the Manthānabhairavatantra, a vast sprawling work that belongs to a corpus of Tantric texts concerned with the worship of the goddess Kubjikā.—Accordingly, while describing the signs of one who is not a Siddha: “He is excessively tall, bald, deformed, short, dwarfish, his nose is ugly or he has black teeth and is wrathful . Some of his limbs are missing and is deceitful, cripple and deformed, foolish, inauspicious [i.e., aśiva], envious, deluded, badly behaved, and violent; without any teacher, he is devoid of the rites, he maligns the Krama without cause, he is not devoted to the Siddhas, he (always) suffers and is without wisdom. He is (always) ill and one should know that he is (always) attached (to worldly objects) and has no scripture. He has no energy and is dull and lazy. Ugly, he lives by cheating and, cruel, he is deluded, and devoid of (any) sense of reality. Such is the characteristic of one who is not accomplished (asiddha) in a past life”.

Aśiva (अशिव) refers to “inauspicious”, according to the Śivapurāṇa 2.3.8.—Accordingly, Sage Nārada said to Menā:—“O Menā, O king of mountains, this daughter of yours has all auspicious signs. Like the first digit of the moon she will increase day by day. She will delight her husband, and heighten the glory of her parents. She will be a great chaste lady. She will grant bliss to everyone always. I see all good signs in the palm of your daughter, O lord of mountains. There is an abnormal line also. Listen to the indication thereof. Her husband will be a naked Yogin, without any qualities. He will be free from lust. He will have neither mother nor father. He will be indifferent to honours. His dress and manners will be inauspicious [i.e., aśiva-veṣa]”.

[«previous (A) next»] — Ashiva in Sanskrit glossary
Source: DDSA: The practical Sanskrit-English dictionary

-vaḥ Name of a certain divine being.

-vā A female demon or goblin.

Aśiva is a Sanskrit compound consisting of the terms a and śiva (शिव).

[«previous (A) next»] — Ashiva in Hindi glossary
Source: DDSA: A practical Hindi-English dictionary

Part 2.3 - Why celebrate the upavāsa of six days of fasting < [Section II.1 - Morality of the lay person or avadātavasana]