Ashakti means something in Hinduism, Sanskrit, Jainism, Prakrit, Marathi, Hindi. If you want to know the exact meaning, history, etymology or English translation of this term then check out the descriptions on this page. Add your comment or reference to a book if you want to contribute to this summary article.

The Sanskrit terms Āśakti and Aśakti can be transliterated into English as Asakti or Ashakti, using the IAST transliteration scheme (?). 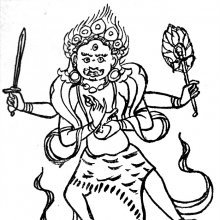 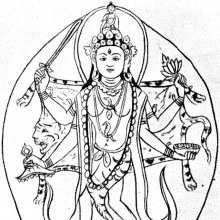 Aśakti (अशक्ति, “incapacity”) refers to a category of pratyayasarga (intellectual products) according to the Sāṃkhya theory of evolution. Pratyayasarga is the first of two types of sarga (products) that come into being during tattvapariṇāma (elemental manifestations), which in turn, evolve out of the two types of pariṇāma (change, modification). According to Īśvarakṛṣṇa, the defects of the eleven senses (indriyabadha) and the defects of the buddhi (buddhibadha) are said to make up incapacity (aśakti).

[«previous (A) next»] — Ashakti in Vyakarana glossary
Source: Wikisource: A dictionary of Sanskrit grammar

Āsakti (आसक्ति) refers to “deep attachment, especially to Bhagavān and His associates; the sixth stage in the development of the bhakti creeper awakened after ruci (taste for bhajana) matures”. (cf. Glossary page from Śrīmad-Bhagavad-Gītā).

Āsakti (आसक्ति) refers to:—Attachment; this especially refers to attachment for the Lord and His eternal associates. Āsakti occurs when one’s liking for bhajana leads to a direct and deep attachment for the personality who is the object of that bhajana. This is the sixth stage in the development of the creeper of devotion, and is awakened upon the maturing of one’s taste for bhajana. (cf. Glossary page from Bhajana-Rahasya).

[«previous (A) next»] — Ashakti in Jainism glossary
Source: The University of Sydney: A study of the Twelve Reflections

Āsakti (आसक्ति) refers to “uninterruptedly”, according to the 11th century Jñānārṇava, a treatise on Jain Yoga in roughly 2200 Sanskrit verses composed by Śubhacandra.—Accordingly, “Fool , having formed a delight [com.—āsakti—āsaktiṃ—‘uninterruptedly’] in pleasure which is produced by the objects of the senses [and is] continually transitory, the three worlds are destroyed”.

[«previous (A) next»] — Ashakti in Marathi glossary
Source: DDSA: The Molesworth Marathi and English Dictionary

[«previous (A) next»] — Ashakti in Sanskrit glossary
Source: DDSA: The practical Sanskrit-English dictionary

3) (In Sāṅ. Phil.) Incapacity of the intellect to produce knowledge.

Aśakti is a Sanskrit compound consisting of the terms a and śakti (शक्ति).

2) Asakti (असक्ति):—[=a-sakti] [from a-sakta] f. the being detached from worldly feelings or passions, [Bhagavad-gītā xiii, 9.]

4) Āsakti (आसक्ति):—[=ā-sakti] [from ā-sañj] f. the act of adhering or attaching one’s self firmly behind

[«previous (A) next»] — Ashakti in Hindi glossary
Source: DDSA: A practical Hindi-English dictionary

1) [noun] want of physical strength to do something or to resist a disease; weakness.

4) [noun] a strong longing for getting a thing.

Chapter 4.2a - Phenomenology in Sāṅkhya