Andhra means something in Buddhism, Pali, Hinduism, Sanskrit, Jainism, Prakrit, the history of ancient India. If you want to know the exact meaning, history, etymology or English translation of this term then check out the descriptions on this page. Add your comment or reference to a book if you want to contribute to this summary article. 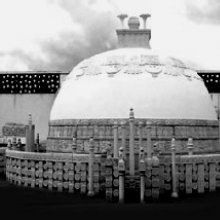 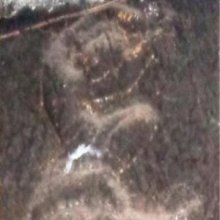 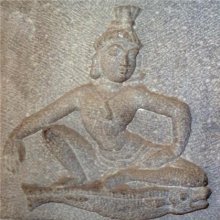 Andhra (अन्ध्र).—One of the seven sons of Dyutimān, who was a son of Priyavrata, according to the Varāhapurāṇa chapter 74. Priyavrata was a son of Svāyambhuva Manu, who was created by Brahmā, who was in turn created by Nārāyaṇa, the unknowable all-pervasive primordial being.

1) Andhra (अन्ध्र).—(ĀNDHRA). This is the Andhra Pradesh in modern India. It has to be surmised that this place was very famous during the period of the composition of the Mahābhārata. (Mahābhārata, Bhīṣma Parva, Chapter 9, Verse 49).

3) Āndhra (आन्ध्र).—The present Āndhra Pradeśa. It was famous even from purāṇic times and it was annexed by Sahadeva by defeating its ruler in a game of dice.

1c) —(c)—a Janapada under the Devarakṣitas.*

1d) A people of the southern country ruled for 300 years;1 a sinful tribe got purified by praying to Hari;2 defeated by Bharata.3 See āṇdhras.4

2a) Āndhra (आन्ध्र).—The kings of Andhra dynasty, thirty in number, ruled the earth for 456 years. Seven of them were contemporaries of seven Kauśalas, chiefs of Vidūra and Niṣadhas;1 According to matsya purāṇa, 19 members of the dynasty ruled for 460 years. Kingdoms of ārya and Mleccha existed side by side—Ābhīras, Gardabhilas, Śakas, Yavanas, Tuṣāras, Guruṇḍas, and Hūṇas.2

2b) A tribe purified by the worship of Hari.1 Enlisted by Jarāsandha against the Yadus;2 a southern country unfit for performing śrāddha.3

Andhra (अन्ध्र) is the name of a country situated within the Dākṣiṇāpatha (Deccan) region. Countries within this region pertain to the Dākṣinātyā local usage (pravṛtti) according to the Nāṭyaśāstra chapter 14. These pravṛttis provide information regarding costumes, languages, and manners in different countries of the world. It is mentioned this region lies between the Southern Ocean and the Vindhya mountains.

The Andhras are usually to be represented by a brown (asita) color when painting the limbs (aṅgaracanā), according to Nāṭyaśāstra chapter 23. The painting is a component of nepathya (costumes and make-up) and is to be done in accordance with the science of āhāryābhinaya (extraneous representation).

[«previous (A) next»] — Andhra in Kavya glossary
Source: Shodhganga: The Kavyamimamsa of Rajasekhara

Andhra (अन्ध्र) is the name a locality mentioned in Rājaśekhara’s 10th-century Kāvyamīmāṃsā.—The country Andhra lying between the river Godāvari in the north side and the Kṛṣṇa in the south side. Its capital name was Pratiṣthanapura.

Andhra (अन्ध्र) or Andhranātha is the name of the Siddha associated with the sacred seat of Kāmarūpa, according to the Manthānabhairavatantra, a vast sprawling work that belongs to a corpus of Tantric texts concerned with the worship of the goddess Kubjikā.

Andhra (अन्ध्र) [=Āṇḍhra] refers to a country belonging to “Āgneyī (south-eastern division)” classified under the constellations of Āśleṣā, Maghā and Pūrvaphālguni, according to the system of Kūrmavibhāga, according to the Bṛhatsaṃhitā (chapter 14), an encyclopedic Sanskrit work written by Varāhamihira mainly focusing on the science of ancient Indian astronomy astronomy (Jyotiṣa).—Accordingly, “The countries of the Earth beginning from the centre of Bhāratavarṣa and going round the east, south-east, south, etc., are divided into 9 divisions corresponding to the 27 lunar asterisms at the rate of 3 for each division and beginning from Kṛttikā. The constellations of Āśleṣā, Maghā and Pūrvaphālguni represent the south-eastern division consisting of [i.e., Andhra] [...]”.

Andhra (अन्ध्र) or Andhradeśa is the name of a territority mentioned as one of the “low places of birth”, which represents one of the five dreadful things mentioned in the 2nd century Mahāprajñāpāramitāśāstra chapter XL.1.4. Accordingly, “in regard to Buddha’s mundane qualities (laukikaguṇa), no one is able to attain them because he has rooted out dreadful things at their very roots. These dreadful things are: (2) a low place of birth (nīcajāti-sthāna), for example: Ngan-t’o-lo (Andhra)”.

The (Andhra) territory included between the Godāvari basin and the Kistna basin, occupied by people of Dravidian race and of Telugu language and called Andhradeśa nowadays. According to the sources mentioned above (Preface to vol. I, p. xii seq.), Nāgārjuna, the presumed author of the Traité, lived part of his life in Andhra at Śrīparvata, and had friendly relations with the Śatavāhana or even the Ikṣvākus who reigned over the region in the 2nd and 3rd century C.E. In that case, it is hard to see why the writer of the Traité shows so much scorn for Andhradeśa by putting it at the top of the list of bad places to be born.

[«previous (A) next»] — Andhra in Jainism glossary
Source: archive.org: Trisastisalakapurusacaritra

Andhra (अन्ध्र) is the name of an ancient country, according to chapter 2.4 [ajitanātha-caritra] of Hemacandra’s 11th century Triṣaṣṭiśalākāpuruṣacaritra (“lives of the 63 illustrious persons”): a Sanskrit epic poem narrating the history and legends of sixty-three important persons in Jainism.

Accordingly:—“'Then the King set out following the path of the cakra-jewel to the west, obscuring the sun by the dust of the army. [...]; blinding the Andhras by his own splendor like the sun blinding owls; [...] the King gradually arrived at the shore of the western ocean. After he had established camp, concentrating on Prabhāsa, observing a three days’ fast, he began pauṣadha in the pauṣadha-house. [...]”.

Āndhra (आन्ध्र) is classified as one of the eighteen dialects (Deśī) of ancient India, as described in the Kathās (narrative poems) such as Uddyotanasūri in his 8th-century Kuvalayamālā (a Prakrit Campū, similar to Kāvya poetry).—Page 152.24 ff.: Here we have a specimen of eighteen Deśī dialects spoken in: [e.g., Āndhra] [...] These different idioms of speech were spoken by the shop-keepers in the market place of Vijayāpurī. [...]

[«previous (A) next»] — Andhra in Sanskrit glossary
Source: DDSA: The practical Sanskrit-English dictionary

1) Name of a people and the country inhabited by them. [The country of the Āndhras is said to be the modern Telingana. But the limits were probably confined to the Ghats on the West and the rivers Godāvarī and Krisnā on the North and South. It bordered on Kalinga (See Dk. 7th Ullāsa), and its capital Andhranagara is probably the old town of Vengi or Vegi. According to Daṇḍin, there was near it a lake 'like the ocean and crested with cranes' which description can only refer to the lake Colair which has an area of over 15 miles; जगन्नाथाटूर्ध्वभागाद- र्वाक् श्रीभ्रमरात्मकात् । तावदन्ध्राभिधो देशः (jagannāthāṭūrdhvabhāgāda- rvāk śrībhramarātmakāt | tāvadandhrābhidho deśaḥ)].

2) Name of a dynasty of kings.

3) a man of a low caste (the offspring of a Vaideha father and Kārāvara mother, who lives by killing game), [Manu-smṛti x, 36.]

6) a king of that country

7) m. [plural] the inhabitants of that country, [Mahābhārata; Bhāgavata-purāṇa etc.]

(-ndhrāḥ) 1) The name of a people or country in the Dekhan, probably the northern part of the modern Telingana. Comp. āndhra.

(-ndhraḥ) A man of low caste: the offspring of a Vaideha father and a Kārāvara mother; he lives by killing game and is not allowed to reside within a village or town, but must live under Chaitya-trees, in cemeteries, on mountains or in forests; (according to Manu, who embodies in this manner the Andhra-aborigines into the Brahmanical system). Compare also āndhra. E. unknown.

1) [noun] one of the Dravidian language chiefly spoken in, and the official language of, Andhra Pradesh and Telangana.

2) [noun] one of the southern states of Republic India (earlier including the present Telengana.

3) [noun] a male member of a people living in that state or whose mother tongue is Telugu.

Chapter 23 - The History of the Dynasties of Anu, Druhyu, Turvasu and Yadu < [Book 9 - Ninth Skandha]