Anda means something in Buddhism, Pali, Hinduism, Sanskrit, Marathi, Jainism, Prakrit, Hindi, biology. If you want to know the exact meaning, history, etymology or English translation of this term then check out the descriptions on this page. Add your comment or reference to a book if you want to contribute to this summary article. 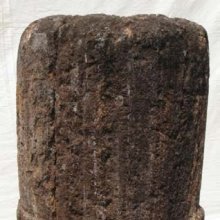 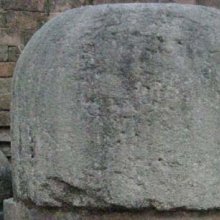 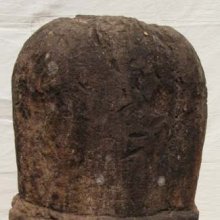 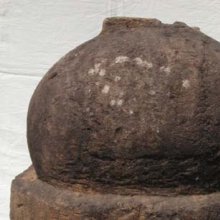 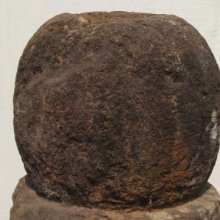 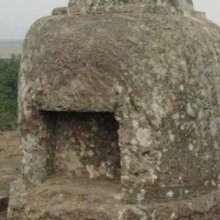 Aṇḍa (अण्ड).—* Sūta, the disciple of Vyāsa said to the Munis at the Naimiśāraṇya about the creation of the Universe: In the beginning in the heavy universal darkness, the first seed of life (aṇḍa) appeared. (Mahābhārata, Ādi Parva, Chapter 1, Verse 28).

*) AṆḌA. The primal seed (Aṇḍa=egg or seed) from which everything was born.

1b) Beyond Āloka. Here are the seven continents and earth surrounded by a sea of clouds.1 The golden egglike aṇḍa emerges from Īśvara's seed and attains yoni (prakṛti), the latter being the embodiment of Nārāyaṇa, in a period of a thousand years. It became heaven and earth, ākāśa being in the middle.2 The outside is covered with waters ten times the aṇḍa— covered by tejas,—successively covered by vāyu, by ākāśa, this by bhūtādi; that by mahat and that in turn by avyakta each ten times the mass of its predecessor. These are the seven prakṛtis. avyakta is kṣetra and Brahmā ksetrajña.3 Brahmā born of.4 Like the moon in kumbha rāśi at the commencement of the śukla pakṣa; there are several aṇḍas, each covered by seven characteristics of prakṛti.5

Aṇḍa (अण्ड) refers to an “egg”, symbolizing the “microcosm” (i.e., the Egg of Brahmā—the universe that is projected into the body), according to Śitikaṇṭha’s Mahānayaprakāśa.—If (consciousness) abides in the Point (bindu) one can drink the nectar of the Moon located above. It is the light of the Abode of the Moon. Achieve repose by the unfolding of the microcosm (aṇḍa-vikāsa). This is the unique and special (quality) of the light of the Abode of the Sun. The digestion (of multiplicity) is the power of the gastric fire of the navel because, even though (this) Fire pervades the entire body, the Violent digestion (haṭhapāka) of diversity takes place in the belly.

Note: The word ‘aṇḍa’ literally means ‘egg’. Presumably, what is meant here is the Egg of Brahmā, i.e. the universe that is projected into the body.

Aṇḍa (अण्ड) refers to an “egg”, according to the Bṛhatsaṃhitā (chapter 1), an encyclopedic Sanskrit work written by Varāhamihira mainly focusing on the science of ancient Indian astronomy astronomy (Jyotiṣa).—Accordingly, “[...] There was darkness (chaos) in the beginning. Then came water (into existence). On it (floated) a golden-coloured egg [i.e., aṇḍa], the (divine) seed consisting of the Earth and the Firmament from which there arose Brahmā, the creative agent with the sun and moon for his eyes. Kapila says that the universe had its origin in pradhāna; Kaṇātha in dravya and the like; a few in kāla (time); others in Svabhāva (nature); and some in karma. [...]”.

[«previous (A) next»] — Anda in Mahayana glossary
Source: archive.org: Bulletin of the French School of the Far East (volume 5)

Aṇḍa (अण्ड) [?] is the name of a Devaputra appointed as one of the Divine protector deities of Bālukā, according to chapter 17 of the Candragarbha: the 55th section of the Mahāsaṃnipāta-sūtra, a large compilation of Sūtras (texts) in Mahāyāna Buddhism partly available in Sanskrit, Tibetan and Chinese.—In the Candragarbhasūtra, the Bhagavat invites all classes of Gods and Deities to protect the Law [dharma?] and the faithful in their respective kingdoms of Jambudvīpa [e.g., the Devaputra Yang-tch'a (Aṇḍa ?) in Bālukā], resembling the time of the past Buddhas.

Aṇḍa (अण्ड) or Aṇḍaja refers to an “egg” (i.,e., ‘that which is egg-born’), according to the Vajratuṇḍasamayakalparāja, an ancient Buddhist ritual manual on agriculture from the 5th-century (or earlier), containing various instructions for the Sangha to provide agriculture-related services to laypeople including rain-making, weather control and crop protection.—Accordingly, [As the Bhagavān teaches an offering manual]: “[...] All crops, all flowers and fruits will be well protected. [...] Until the stake is driven out all kinds of pests, produced from moist heat, self-produced and egg-born (aṇḍaja), arisen from rocks or flowers, do not prevail. Harm of various sorts caused by Nāgas will not be victorious again. [...]”.

[«previous (A) next»] — Anda in Marathi glossary
Source: DDSA: The Molesworth Marathi and English Dictionary

[«previous (A) next»] — Anda in Sanskrit glossary
Source: DDSA: The practical Sanskrit-English dictionary

-ḍam 1 A multitude of eggs, brood.

Aṇḍa (अण्ड).—[neuter] egg, testicle; gata [adjective] being in the egg.

5) Name of Śiva (from his being identified with the Brahmāṇḍa or mundane egg).

7) a [particular] part of a Stūpa, [Divyāvadāna]

5) The musk bag, regarded as the scrotum of the deer.

6) A name or epithet of Śiva (from his being compared to the Brahmānḍa or representing the world). E. am, uṇ. aff. ḍa.

(-ndā) Perhaps the same as andikā. (Both forms given on the authority of Hemachandra’s Dhātuparāyaṇa; their real occurence is doubtful.) E. and, kṛt aff. ac. See the Preface.

[«previous (A) next»] — Anda in Hindi glossary
Source: DDSA: A practical Hindi-English dictionary

Anda in Hindi refers in English to:—(nm) an egg; [amde-bacce] the offspring; [amde ki khatira murgi halala karana] to kill the hen that lays the golden eggs; [amde sena] to hatch, to incubate; to sit idle..—anda (अंडा) is alternatively transliterated as Aṃḍā.

1) Aṃḍa (अंड) in the Prakrit language is related to the Sanskrit word: Aṇḍa.

1) [noun] one who shoots with a bow and arrows; an archer.

2) [noun] a man engaged in military services; a soldier.

1) [noun] an oval body laid by birds and certain animals from which the young is hatched; an egg.

3) [noun] the bag that contains the testicles; the scrotum.

5) [noun] the liquid that covers spermatozoa; the semen.

7) [noun] the world a) the entire earth; the earth planet; b) the whole universe.

1) [noun] the quality that pleases the sight; beauty; grace; charm.

4) [noun] idea or aim kept for an effort; purpose.

5) [noun] the state or condition of being.

6) [noun] the essential quality that makes a thing what it is; nature.

Chapter 56 - On the building of temples (prāsāda-lakṣaṇa)