Amoghapasha means something in Buddhism, Pali, Hinduism, Sanskrit. If you want to know the exact meaning, history, etymology or English translation of this term then check out the descriptions on this page. Add your comment or reference to a book if you want to contribute to this summary article.

The Sanskrit term Amoghapāśa can be transliterated into English as Amoghapasa or Amoghapasha, using the IAST transliteration scheme (?). 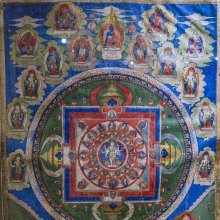 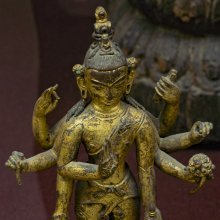 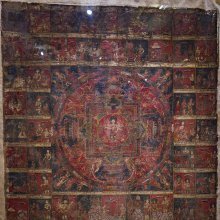 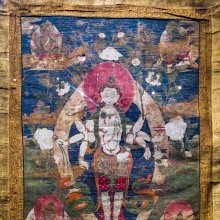 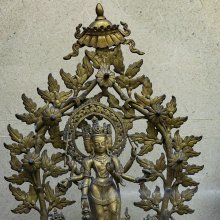 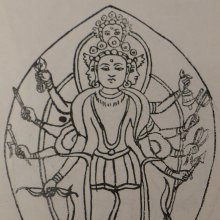 Amoghapāśa (अमोघपाश) is the name of Vidyārāja (i.e., “wisdom king”) mentioned as attending the teachings in the 6th century Mañjuśrīmūlakalpa: one of the largest Kriyā Tantras devoted to Mañjuśrī (the Bodhisattva of wisdom) representing an encyclopedia of knowledge primarily concerned with ritualistic elements in Buddhism. The teachings in this text originate from Mañjuśrī and were taught to and by Buddha Śākyamuni in the presence of a large audience (including Amoghapāśa).

“Amoghapāśa is four-faced and eight-armed and stands on a lotus. He carries in his four right hands the Vajra, the sword, the goad and the bow, while the four left carry the Ghaṇṭā, the Tridaṇḍī, the noose and the arrow”.

The names of the 108 deities [viz., Amoghapāśa] possbily originate from a Tantra included in the Kagyur which is named “the 108 names of Avalokiteshvara”, however it is not yet certain that this is the source for the Nepali descriptions.

[«previous (A) next»] — Amoghapasha in Sanskrit glossary
Source: DDSA: The practical Sanskrit-English dictionary