Amitabha means something in Buddhism, Pali, Hinduism, Sanskrit, Hindi. If you want to know the exact meaning, history, etymology or English translation of this term then check out the descriptions on this page. Add your comment or reference to a book if you want to contribute to this summary article.

Alternative spellings of this word include Amitabh. 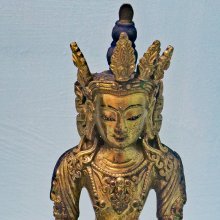 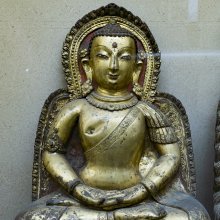 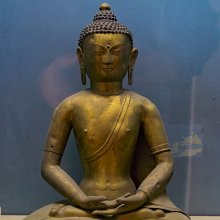 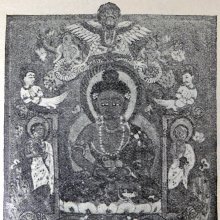 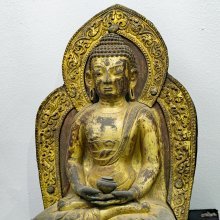 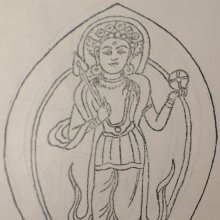 1a) Amitābhā (अमिताभा).—One of the three deva gaṇas of the first epoch of Sāvarṇi Manu;1 twenty branches mentioned.2

1b) A group of gods of the Raivata epoch, fourteen in number.*

2. Amita - One of the two daughters of Sihahanu (the other being Pamita) and therefore a sister of Suddhodana, the Buddhas father.

She was a grand daughter of Devadaha Sakka (Mhv.ii.16-22; see Rockhill, p.13, where her son is called Kalyanavardhana).

A king of twenty five kappas ago; a previous birth of Ekasannaka Thera. Ap.i.210.

Amitābha (अमिताभ) is the name of the Buddha of the Sukhāvatī universe according to the 2nd century Mahāprajñāpāramitāśāstra (chapter XV). Accordingly, “in the ten directions, there are other pure universes (pariśuddha-lokadhātu) such as the Ngan lo (Sukhāvatī) of the Buddha A mi t’o (Amitābha)”.

Amitabha is a celestial buddha described in the scriptures of the Mahayana school of Buddhism. Amitabha is the principal buddha in the Pure Land sect, a branch of Buddhism practiced mainly in East Asia. According to these scriptures, Amitabha possesses infinite merits resulting from good deeds over countless past lives as a bodhisattva named Dharmakara. "Amitabha" is translatable as "Infinite Light," hence Amitabha is often called "The Buddha of Infinite Light."

Amitābha (also Amita), Skt. (Jap., Amida), lit., “Boundless Light”; one of the most important and popular buddhas of the Mahāyāna, unknown in early Buddhism. He is ruler of the western paradise Sukhāvati, which is not to be understood as a location but as a state of consciousness. Amitābha is at the center of the worship of the Pure Land school of Chinese and Japanese Buddhism. He symbolizes mercy and wisdom.

Amitābha is a name of Mañjuśrī (the embodiement of non-dual knowledge) and, together with other names, forms the core essence of the Mañjuśrīnāmasaṃgīti. The Nāmamantrārthāvalokinī provides the practitioner a sādhana (‘meditative practice’) to turn these names into mantras. These mantras are chanted for the benefit of all beings, and then placed and contemplated in the Vajradhātu-mahāmaṇḍala, which is an extended version of the Vajradhātu-maṇḍala.

Amitābha (अमिताभ) is the name of a Tathāgata (Buddha) mentioned as attending the teachings in the 6th century Mañjuśrīmūlakalpa: one of the largest Kriyā Tantras devoted to Mañjuśrī (the Bodhisattva of wisdom) representing an encyclopedia of knowledge primarily concerned with ritualistic elements in Buddhism. The teachings in this text originate from Mañjuśrī and were taught to and by Buddha Śākyamuni in the presence of a large audience (including Amitābha).

1) Amitābha (अमिताभ) refers to one of the Dhyāni-Buddhas, according to Vajrayāna or Tantric Buddhism.—His Śakti, or female counterpart (spiritual consort) is named Pāṇḍarā and their Bodhisattva offspring is named Padmapāṇi.—His olour is red; his vehicle is a Peacock; his Mudrā is Samādhi; his symbol is a lotus.—By far the most ancient among the Dhyāni Buddhas is Amitābha who is said to reside in the Sukhāvatī heaven in peaceful meditation. He presides over the current Kalpa (cycle) which is Bhadrakalpa. As a Dhyāni Buddha he does not create. It is his Bodhisattva Padmapāṇi, also known as Avalokiteśvara, who is responsible for creation.

The form of Amitābha is described in the Pañcākara section of the Advayavajrasaṃgraha thus: “On the western petal on the disc of the sun there is Amitābha of red colour originating from the red syllable Hrīḥ. He has a lotus as his sign and he exhibits the Samādhi Mudrā in his two hands. He is of the nature of the cosmic element of Saṃjñā (name), is an embodiment of attachment and belongs to the Lotus family. He stands for the vital fluid, and is endowed with the Pratyavekṣaṇā (looking after) knowledge. He represents the summer season and the acid taste. He presides over the group of letters beginning with Ṭa (cerebrals) and rules over the evening twilight”.

When represented on the Stūpa, Amitābha always faces the West and the Nepalese Buddhists regard him as the fourth Dhyāni Buddha. His two hands with palm open lie on his lap, one upon the other forming the Dhyāna or the meditative mudrā. His colour is red and his Vāhana is a pair of peacocks. His recognition symbol is the Lotus.

The names of the 108 deities [viz., Amitābha] possbily originate from a Tantra included in the Kagyur which is named “the 108 names of Avalokiteshvara”, however it is not yet certain that this is the source for the Nepali descriptions.Source: Wisdomlib Libary: Vajrayogini

Amitābha (अमिताभ) is the name of a deity to be contemplated upon by a practicioner purifying his correspondences (viśuddhi), according to the 12th-century Abhisamayamañjarī. Amitābha is alternatively known by the name Padmanarteśvara. The contemplation is prescribed as a preliminary ritual for a yogin wishing to establish, or reestablish the union with a deity.

Amitābha is associated with the skandha named saṃjñā (cognition) and the color red. He is to be visualised as standing in the warrior (ālīḍha) stance, having three eyes, matted locks and bearing the five signs of observance (mudrā).

Amitābha (अमिताभ) is the husband of Kharvarī: the name of a Ḍākinī (‘sacred girl’) presiding over Rāmeśvara: one of the four Upapīthas (‘sacred spot’) present within the Cittacakra (‘circle of mid’), according to the 9th-centruy Vajraḍākatantra. The Cittacakra is one of three Cakras within the Tricakra system which embodies twenty-four sacred spots or districts resided over by twenty-four Ḍākinīs whose husbands (viz., Amitābha) abide in one’s body in the form of twenty-four ingredients (dhātu) of one’s body.

Kharvarī has for her husband the hero (vīra) named Amitābha. She is the presiding deity of Rāmeśvara and the associated internal location is ‘middle of the forehead’ and the bodily ingredients (dhātu) are ‘bones’.

Amitābha (अमिताभ) is the name of a Vīra (hero) who, together with the Ḍākinī named Kharvarī forms one of the 36 pairs situated in the Vajracakra, according to the 10th century Ḍākārṇava chapter 15. Accordingly, the vajracakra refers to one of the four divisions of the sahaja-puṭa (‘innate layer’), situated within the padma (lotus) in the middle of the Herukamaṇḍala. The 36 pairs of Ḍākinīs and Vīras [viz., Amitābha] each have one face and four arms; they hold a skull bowl, a skull staff, a small drum and a knife; they are dark-bluish-black in color.

Amitābha (अमिताभ) is the name of a Ḍāka (male consort) and one of the deities of the Cakrasaṃvara-maṇḍala or Saṃvaramaṇḍala of Abhayākaragupta’s Niṣpannayogāvalī, p. 45 and n. 145; (Cf. Cakrasaṃvaratantra, Gray, David B., 2007).—The Cakrasaṃvara mandala has a total of sixty-two deities. [...] Three concentric circles going outward, the body, speech and mind wheels (kāya-vāka-citta), in the order: mind (blue), speech (red), and body (white), with eight Ḍākinīs each in non-dual union with their Ḍākas, "male consorts".

Associated elements of Kharvarī and Amitābha:

Amitābha (अमिताभ) refers to “endless-light Buddha” and represents one of the “five Buddhas” (pañcabuddha) as defined in the Dharma-saṃgraha (section 3). The Dharma-samgraha (Dharmasangraha) is an extensive glossary of Buddhist technical terms in Sanskrit (e.g., pañcabuddha and Amitābha). The work is attributed to Nagarguna who lived around the 2nd century A.D.

Source: The Art of Asia: Who is Who in HeavenAmitabha (Chinese: A mi to po; Japanese: Amida), Budda of "Infinite Light" or "Infinite Life," is one of the five transcendental Buddhas. He is believed to reside over Western Paradise where souls of his followers strive for enlightenment.

[«previous (A) next»] — Amitabha in Sanskrit glossary
Source: DDSA: The practical Sanskrit-English dictionary

-bhaḥ a class of divinities mentioned in V. P.

Amitābha is a Sanskrit compound consisting of the terms amita and ābha (आभ).

Amitābha (अमिताभ).—(1) name of the Buddha who presides over the western paradise Sukhāvatī (lokadhātu); also known as Amitāyu(s), Amitaprabha, Amitanātha, and doubt- less intended by the (Ārya-)Mañjuśrīmūlakalpa names Amitāyu(rjñāna)- viniścayarājendra (or the like), even tho he is once depicted separately in a painting centering about that personage ((Ārya-)Mañjuśrīmūlakalpa 305.12—13, compare 304.25). See these names separately. The two commonest names are Amitābha and Amitāyus, and they are as a rule quite equivalent and interchangeable; see notably Sukhāvatīvyūha 62.13—14; 95.15 and 20. Often Sukhāvatī is mentioned with him. He is the fourth of the ‘transcendent’ Buddhas, Dharmasaṃgraha 3; Mahāvyutpatti 85. Other occurrences: Suvarṇabhāsottamasūtra 2.5; Bhadracarī 49, 57, 59, 62; Śikṣāsamuccaya 175.6; Kāraṇḍavvūha 18.7; 21.8 etc.; (Ārya-)Mañjuśrīmūlakalpa 42.16; 426.7; Gaṇḍavyūha 82.5; Laṅkāvatāra-sūtra 283.7; Sukhāvatīvyūha 1.6; 28.10 etc.; Sādhanamālā 16.10 etc.; (2) name of a Bodhisattva: Gaṇḍavyūha 442.22 (one of a long list, and hardly to be identified with the Buddha A.).

[«previous (A) next»] — Amitabha in Hindi glossary
Source: DDSA: A practical Hindi-English dictionary

1) [noun] a man worthy of high praise; a glorious or illustrious man.