Amaravati means something in Buddhism, Pali, Hinduism, Sanskrit, Jainism, Prakrit, the history of ancient India, Marathi. If you want to know the exact meaning, history, etymology or English translation of this term then check out the descriptions on this page. Add your comment or reference to a book if you want to contribute to this summary article. 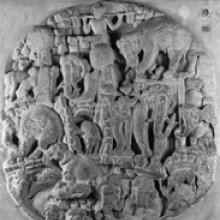 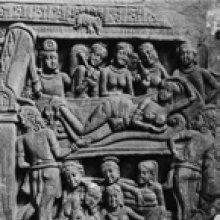 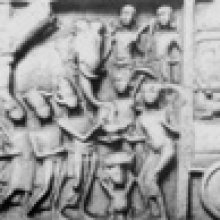 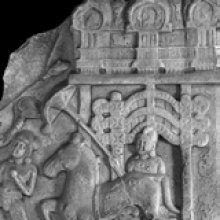 Amarāvatī (अमरावती) is the name of the capital of Indra and other gods according to the Śiva-purāṇa 3.18.2-3: “Formerly Indra and other gods defeated by the Asuras left their capital Amarāvatī due to fear. The gods harrassed by the Daityas went to Kaśyapa. Highly agitated, they bowed down to him with palms joined and shoulders drooping”.

Amarāvatī is the capital of Indra’s heaven, famous for its greatness and splendour. It is called Devapura, ‘city of gods’ and Pūṣābhāsā, ‘sun-splendour’ and by various other names.

Amarāvatī (अमरावती).—It is the city of Indra, the King of the Devas. Its location is described in Devī Bhāgavata as follows: "Brahmā’s world extends over 10,000 yojanas on the Mahāmeru mountain. There are eight cities-each 2,500 square yojanas in extent—of the Aṣṭadikpālakas in eight parts of this Brahmapurī. Thus there are nine cities on the top of the Mahā Meru. They are the following:—

On the southern side, Yama’s city, Saṃyamanī.

In the north, Kubera’s city Mahodaya.

Amarāvatī (अमरावती).—Heaven noted for the pleasure-park Nandana. A description of the city, occupied for some time by Bali.1 Though it was really the capital of Indra, the latter says that it belonged to Kṛṣṇa.2 When it is midday here, the sun rises at Samyamana.3

Amarāvatī (अमरावती) is a name mentioned in the Mahābhārata (cf. III.164.42, III.170.25) and represents one of the many proper names used for people and places. Note: The Mahābhārata (mentioning Amarāvatī) is a Sanskrit epic poem consisting of 100,000 ślokas (metrical verses) and is over 2000 years old.

Amarāvatī (अमरावती).—The capital city of Lord Indra's heavenly abode. It has the power of greatly extending the life span of its residents.

Amarāvati (अमरावति, “immortality”):—The name of the city where Indira resides. Indra is the king of the gods. He is the ruler of the storm and represents the all-pervading electric energy. As a major deity in the Ṛg-veda, he also represents the cause of fertility.

1. Amaravati - Also called Amara. A city in the time of Dipankara Buddha. Sumedha was born there in a very rich family and renounced the world after having given his wealth away (Bu.ii.5; J.i.6; DhA.i.83, etc.). According to the Mahabodhivamsa (p.2) the city was so called because it was inhabited by men like gods.

2. Amaravati - A city in the time of Kondanna Buddha eighteen leagues in extent. It was in the Devavana, near the city, that Kondanna preached his first sermon (v.l. Arundhavati). BuA.108-9.

[«previous (A) next»] — Amaravati in Jainism glossary
Source: archive.org: Trisastisalakapurusacaritra

Amarāvatī (अमरावती) refers to the capitals of the Nāgas and the Gods, according to chapter 2.1 [ajitanātha-caritra] of Hemacandra’s 11th century Triṣaṣṭiśalākāpuruṣacaritra (“lives of the 63 illustrious persons”): a Sanskrit epic poem narrating the history and legends of sixty-three important persons in Jainism.

Accordingly, “in this province there (i.e., Vatsa) is a famous city, suitably named Susīmā (Well-bounded), a depository of wealth, resembling a tilaka on the earth. [...] It (the city) was just like the sole meeting-place for pleasure of love, wealth, and duty at the same time, like friends. Because of its great wealth the city was like a sister between the cities Bhogāvatī below and Amarāvatī above”.

[«previous (A) next»] — Amaravati in India history glossary
Source: Google Books: Shifting Stones, Shaping the Past

Amarāvatī (अमरावती) is a relatively recent name for this site and its environs. The ancient name, Dhānyakaṭaka and its variant Dharanikoṭa, appears in numerous inscriptions. Perhaps the earliest reference to Dhānyakaṭaka appears on a pillar with several narratives, now in the Amarāvatī Site Museum. Along with several episodes from the life of the Buddha, the pillar in question, dated to the first century BCE, includes a depiction of a village scene and a river, which is labeled “Dhamnakada.”

Amaravatī (अमरवती) was a great centre of Buddhism. An inscription from Amaravati, dated Ś. 1102, states that “there isa city named Dhānyakaṭaka..., where god Buddha, worshipped by the creator, is quite close, (and) where (there is) a very lofty Caitya, well decorated with various sculptures”. The great Caitya, mentioned here, seems to be identical with the famous Amaravatī-stupa.

Amarāvatī (अमरावती) is the name of a locality situated in Dakkhiṇāpatha (Deccan) or “southern district” of ancient India, as recorded in the Pāli Buddhist texts (detailing the geography of ancient India as it was known in to Early Buddhism).—In the Dhammapadaṭṭhakathā, there is a reference to the city of Amarāvatī. It is stated that the Buddha in one of his previous births as a Brahmin youth named Sumedha was born in that city. It is identical with modern city of Amaraoti close to the rivers of Dharanikotta (a mile west of ancient Amarāvatī on the Kriṣṇa famous for its ruined stūpa).

Amaravati was during the Satavahana dynasty (200 BC) an important region where now artificats (metal images) have been found.—The Satavahanas who ruled in the Deccan and the South had a long reign of about 400 years (circa 200 BC to AD 200). The fine workmanship of the carvers reveals the high standard of efficiency of these craftsmen. The metal images found at Buddham, Amaravati, Kolhapur show the high watermark of metal work in the Satavahana period. The Ikshvakus succeeded the Satavahanas towards the end of the 2nd century AD and they were great patrons of art. The metal work of their period was equally good as their stone carving.

[«previous (A) next»] — Amaravati in Marathi glossary
Source: DDSA: The Molesworth Marathi and English Dictionary

amarāvatī (अमरावती).—f (S) The name of Indra's capital in Swarga.

[«previous (A) next»] — Amaravati in Sanskrit glossary
Source: DDSA: The practical Sanskrit-English dictionary

2) Name of a modern town in Berar, Amaravati.

1) [noun] the capital city of the region of the gods; the city of Indra.

2) [noun] (fig.) any place or city of great beauty and pleasure.

3) [noun] a particular breed of cattle, the male of which has a very strong built up.