Alu means something in Hinduism, Sanskrit, Jainism, Prakrit, Buddhism, Pali, the history of ancient India, Marathi, Jainism, Prakrit, Hindi. If you want to know the exact meaning, history, etymology or English translation of this term then check out the descriptions on this page. Add your comment or reference to a book if you want to contribute to this summary article.

Alternative spellings of this word include Aalu. 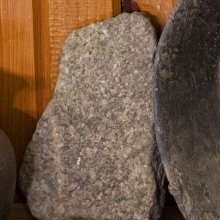 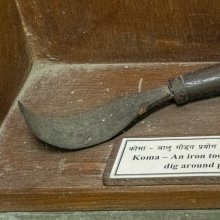 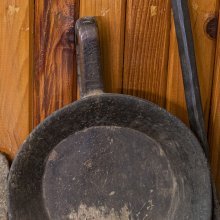 [«previous (A) next»] — Alu in Vyakarana glossary
Source: Wikisource: A dictionary of Sanskrit grammar

[«previous (A) next»] — Alu in Ayurveda glossary
Source: Wisdom Library: Local Names of Plants and Drugs

Alu [अळू] in the Marathi language is the name of a plant identified with Meyna laxiflora from the Rubiaceae (Coffee) family having the following synonyms: Vangueria spinosa. For the possible medicinal usage of alu, you can check this page for potential sources and references, although be aware that any some or none of the side-effects may not be mentioned here, wether they be harmful or beneficial to health.

Alu [आळू] in the Marathi language is the name of a plant identified with Colocasia esculenta (L.) Schott from the Araceae (Arum) family having the following synonyms: Alocasia illustris, Alocasia dussii.

Alu in the Sanskrit language is the name of a plant identified with Dinebra retroflexa (Vahl) Panz. from the Poaceae (Grass) family having the following synonyms: Cynosurus retroflexus, Dinebra paspaloides.

Ālu (आलु) in Prakrit or Āluka in Sanskrit refers to taro (Arum colocasia). Today this word tends to be given the meaning of ‘potato’. This plant is classifed as ananta-kāya, or “plants that are inhabited by an infinite number of living organisms”, and therefore are abhakṣya (forbidden to consume) according to both Nemicandra (in his Pravacana-sāroddhāra v245-246) and Hemacandra (in his Yogaśāstra 3.44-46). Those plants which are classified as ananta-kāyas (e.g., ālu) seem to be chosen because of certain morphological peculiarities such as the possession of bulbs or rhizomes orthe habit of periodically shedding their leaves; and in general theyare characterized by possibilities of vegetative reproduction.

Aḻu.—(SITI), Tamil; a variety of market dues; probably, the same as aḻḻu and aḻḻāya-mānyam. Note: aḻu is defined in the “Indian epigraphical glossary” as it can be found on ancient inscriptions commonly written in Sanskrit, Prakrit or Dravidian languages.

[«previous (A) next»] — Alu in Marathi glossary
Source: DDSA: The Molesworth Marathi and English Dictionary

aḷū (अळू).—m A tree and its fruit. Its fruit is sweetish and of the color of snuff. 2 A vegetable. Arum campanulatum. Sykes. Also Calladium esc. In the Konkan the form is aḷūṃ.

[«previous (A) next»] — Alu in Sanskrit glossary
Source: DDSA: The practical Sanskrit-English dictionary

8) (in modern dialects applied to the yam, potato etc.)

[«previous (A) next»] — Alu in Hindi glossary
Source: DDSA: A practical Hindi-English dictionary

1) [verb] to shed tears; to weep with or without vocal sound or utterance.

Aḷu (ಅಳು):—[noun] a kind of tax levied, not in practice now.

2) [noun] its starchy, brown-skinned tuber used as a vegetable; potato.

1) [verb] to exercise authority over; to rule; to administer; to direct; to control; to manage, to govern.

3) [verb] to enjoy; to use with delight and satisfaction.

1) [verb] to go under the surface of a liquid; to plunge or sink oneself in to water etc.

5) [noun] a member of that branch of an army consisting of soldiers trained and equipped to fight chiefly on foot; a foot-soldier.

7) [noun] a person employed to perform services, esp. household duties, for another; a servant.

8) [noun] a chess piece of the lowest value which can be moved only forward and one square at a time (or two squares on its first move), and which captures with a diagonal move; a pawn.

9) [noun] a measure of depth or height, varying from five feet to six feet.

Verse 3.4.466 < [Chapter 4 - Descriptions of Śrī Acyutānanda’s Pastimes and the Worship of Śrī Mādhavendra]

Chapter 366 - Words relating to Kṣatriyas, Vaiśyas and other classes

Myths and Legends of Babylonia and Assyria (by Lewis Spence)

Chapter X - The Magic and Demonology of Babylonia and Assyria