Alidha means something in Hinduism, Sanskrit, Jainism, Prakrit. If you want to know the exact meaning, history, etymology or English translation of this term then check out the descriptions on this page. Add your comment or reference to a book if you want to contribute to this summary article. 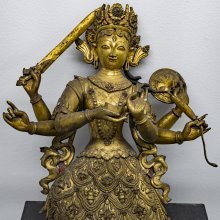 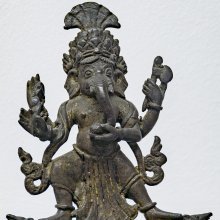 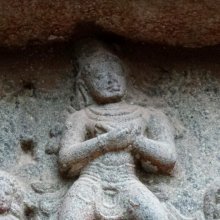 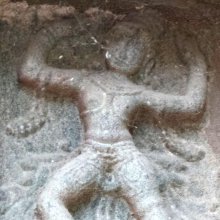 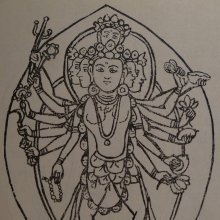 Ālīḍha (आलीढ) or Ālīḍhāsana similar to the ālīḍha-maṇḍala in Bharatanatyam, as defined according to texts dealing with śilpa (arts and crafs), known as śilpaśāstras.—There is a posture in iconography where the standing figure has the bent left leg placed in front with the right leg stretched out behind. The legs are held one behind the other and the arms represent the stretched string of a bow. The left hand holds a bow in a śikhara-mudrā, and the right hand is in kaṭaka-mudrā, with the string and arrow pulled back. This posture is not exactly the same as it is used in the practising trend of dancing with dancers following the Abhinayadarpaṇa text for the technicalities, but is similar to the descriptions given in Nāṭyaśāstra. The sūrasaṃhāra-mūrti of Murukan fighting with the Asūras is found in the ālīḍha posture. This image is found in the Subrahmaṇ ya Temple in Tirucchentur. The image of Manmadan (God of love) is found in this posture. Manmadan in this posture is found in the Rāmasvāmi Temple in Kumbhakonam and also in the Kamphakareśvar Temple in Tirubhuvanam.

1) Ālīḍha (आलीढ).—One of the 32 aṅgahāras (major dance movement) mentioned in the Nāṭyaśāstra chapter 4. It is also known by the name Udhṛttaka. The instructions for this ālīḍha-aṅgahāra is as follows, “assuming Vyaṃsita-karaṇa, striking the hands on the shoulder, and then Nūpura K, with the left foot [moving first], afterwards Alāta and Ākṣiptaka Karaṇas with the right foot [moving first] and then making Uromaṇḍala gestures with hands and assuming Karihasta and Kaṭicchinna Karaṇas.”.

2) Ālīḍha (आलीढ) also refers to a type of Sthāna (standing posture) defined in the Nāṭyaśāstra chapter 11.

(Instructions for Ālīḍha): The right foot in the maṇḍala-sthāna drawn five tālas apart from the other foot will make the ālīḍha-sthāna, Rudra (Śiva) is its presiding deity.

(Uses of Ālīḍha): This sthāna should be assumed in all acts relating to the Heroic and the Furious Sentiments, duel of wrestlers and in the representation of enemies, an attack on them, and release of missiles.

Ālīḍha (आलीढ) refers to one of the nine maṇḍala (postures of the feet) which represents one of the four “movements of the feet” (pāda) according to the Abhinayadarpaṇa. The third maṇḍala is the ālīḍha where the left foot is placed at a distance of three vitastis away in front of the right foot. With this term there is a posture in iconography where the standing figure has the bent left leg placed in front with the right leg stretched out behind.

Ālīḍha (आलीढ) or Ālīḍhasthāna refers to the “posture for shooting” (the right knee advanced and the left leg retracted), according to the Śivapurāṇa 2.2.3.—“[...] After thinking like this and deciding on his further activity, Kāma fitted his flower-arrows. Kāma, the foremost of archers, stood steady in the posture (sthāna) of Ālīḍha, bent his bow almost into a circle and was ready to shoot. O excellent sage, when the bow was kept ready by him, fragrant winds delighting everyone blew there. The enchanter then charmed Brahmā and others, the mental sons with several sharp flower-arrows”.

1) Ālīḍha (आलीढ) is a Sanskrit word translating to “licked up”, “eaten”, “scraped” or “polished”. It can also refer to “a particular attitude in shooting” (the right knee advanced, the left leg drawn back).

2) Ālīḍhā (आलीढा) is a Sanskrit word referring to “A woman in menstruation”.

[«previous (A) next»] — Alidha in Jainism glossary
Source: The University of Sydney: A study of the Twelve Reflections

[«previous (A) next»] — Alidha in Sanskrit glossary
Source: DDSA: The practical Sanskrit-English dictionary

Ālīḍha (आलीढ).—ppp. of ā-lih, in an-ālīḍha Laṅkāvatāra-sūtra 14.13; 172.12 (Suzuki not tasted, probably rather) not ‘licked’ = not grazed, not (even) lightly touched (by sectarian or heretical theo- rists); applied to questions or doctrines to be expounded.

5) [v.s. ...] n. a particular attitude in shooting (the right knee advanced, the left leg drawn back) [commentator or commentary] on [Kumāra-sambhava; Raghuvaṃśa]

Chapter 50 - Characteristics of an image of the Goddess