Alata means something in Buddhism, Pali, Hinduism, Sanskrit, Marathi, Hindi. If you want to know the exact meaning, history, etymology or English translation of this term then check out the descriptions on this page. Add your comment or reference to a book if you want to contribute to this summary article.

Alternative spellings of this word include Alat. 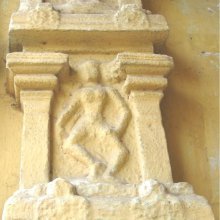 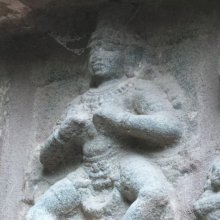 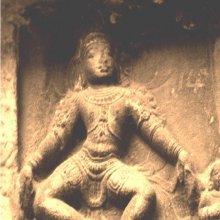 Alāta (अलात) refers to a “fire-brand” and represents the weapons of the Ṛbhus, according to the Śivapurāṇa 2.2.30. Accordingly as Brahmā narrated to Nārada:—“[...] while the sage Bhṛgu was pouring the offerings, thousands of powerful demons—Ṛbhus rose up. O excellent sage, a terrible fight ensued between Śiva’s attendants and the demons who had firebrands (alāta) for their weapons (āyudha). Their hair stood on end when people heard the uproar. The attendants were killed by the Ṛbhus of powerful valour and favoured with Brahminical splendour. They were forced to run without difficulty”.

1b) Alāta (अलात) also refers to a one of the twenty maṇḍalas, according to the Nāṭyaśāstra chapter 12. It is also known by the name alātaka. The Alāta-maṇḍala is classified as a ākāśa, or “aerial”, of which there are ten in total. A maṇḍala is a combination of cārīs (“dance-steps”), which refers refers to the simultaneous movement of the feet (pāda), shanks (jaṅghā) and the hip (ūru). From these cārīs proceed dance as well as movements in general.

2) Alātā (अलाता) refers to a one of the thirty-two cārīs, according to the Nāṭyaśāstra chapter 11. The Alātā-cārī is classified as a ākāśikī, or “aerial”, of which there are sixteen in total. The term cārī  refers to a “dance-step” and refers to the simultaneous movement of the feet (pāda), shanks (jaṅghā) and the hip (ūru). From these cārīs proceed dance as well as movements in general.

Ālāta (आलात) or Ālātacakra refers to a “whirling firebrand” according to the Manthānabhairavatantra, a vast sprawling work that belongs to a corpus of Tantric texts concerned with the worship of the goddess Kubjikā.—Accordingly, “[...] (2) Above it is the Self—supported (svādhiṣṭhāna), (brilliant) as a whirling firebrand [i.e., ālāta-cakra-sannibha]. There, in the middle, is the one called the living being (jīva). One should think that it is as (nourishing) like nectar. [...] (Perfect) contemplation (samādhi) is with (these) sixteen aspects and is (attained) within the form of the sixfold deposition (ṣoḍhānyāsa). He who knows this is (a veritable) Lord of Yogis, the others (who do not) are (just) quoting from books. Once attained the plane that is Void and Non-void, the yogi is freed from bondage”.

A minister and general of Angati, King of Videha. He is described as wise, smiling, a father of sons and full of experience. When Angati consulted his ministers as to ways and means of finding diversion for himself and his subjects, Alatas counsel was that they should set out to battle with a countless host of men. The suggestion of another minister, Vijaya, was that the king should visit some samana or brahmin, and this idea it was that won the kings approval. Thereupon Alata persuaded Angati to visit the Ajivika Guna of the Kassapa family, who evidently enjoyed Alatas patronage. When Guna preached his doctrine that good and evil actions were alike fruitless, he was supported by Alata, who stated that in a previous birth he had been Pingala, a cowkilling huntsman in Benares, and that he had committed many sins for which, however, he had never suffered any evil consequences.

Later, Angatis daughter Ruja explains that Alatas present prosperity is the result of certain past acts of righteousness and that time will eventually bring him suffering on account of his evil deeds. Alata himself, she says, is not aware of this because he can remember only one previous birth, while she herself can recall seven. See the Maha Narada Kasappa Jataka (J.vi.222ff).

Alata was a previous birth of Devadatta (J.vi.255).

[«previous (A) next»] — Alata in Marathi glossary
Source: DDSA: The Molesworth Marathi and English Dictionary

[«previous (A) next»] — Alata in Sanskrit glossary
Source: DDSA: The practical Sanskrit-English dictionary

(-taṃ) A firebrand, a coal burning or extinguished. E. alāta and aṇ aff.

[«previous (A) next»] — Alata in Hindi glossary
Source: DDSA: A practical Hindi-English dictionary

Verse 1247 < [Chapter 17 - Examination of the Definition of Sense-perception]

Chapter 1.6 - The Karika of Gaudapada