Akriti means something in Buddhism, Pali, Hinduism, Sanskrit, the history of ancient India, Marathi, Hindi. If you want to know the exact meaning, history, etymology or English translation of this term then check out the descriptions on this page. Add your comment or reference to a book if you want to contribute to this summary article.

The Sanskrit terms Ākṛtī and Ākṛti can be transliterated into English as Akrti or Akriti, using the IAST transliteration scheme (?).

Alternative spellings of this word include Akrati. 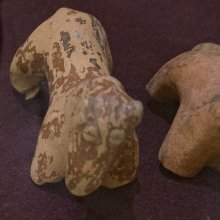 [«previous (A) next»] — Akriti in Ayurveda glossary
Source: Wisdom Library: Āyurveda and botany

Ākṛti (आकृति) is a Sanskrit technical term, translating to the “physical charactereistics” of a plant (e.g. shape). It is used throughout Ayurvedic literature such as the Suśruta-saṃhitā and the Caraka-saṃhitā.

Ākṛti (आकृति) refers to a “(human) form”, according to the Śivapurāṇa 2.3.30 (“The Celebration of Pārvatī’s Return”).—Accordingly, as Brahmā narrated to Nārada: “[...] In the meantime the lord of mountains returned from the Gaṅgā. He saw the mendicant in the human form (nara-ākṛti) in his court-yard. On hearing the details from Menā he became very angry. He ordered his attendants to drive out the dancer. But, O excellent sage, none of them could push him out as he was hot to the touch like a blazing fire and very brilliant. [...]”.

Ākṛtī (आकृती) refers to a class of rhythm-type (chandas) containing twenty-two syllables in a pāda (‘foot’ or ‘quarter-verse’), according to the Nāṭyaśāstra chapter 15. There are twenty-six classes of chandas and out of them arise the various syllabic meters (vṛtta), composed of four pādas, defining the pattern of alternating light and heavy syllables.

[«previous (A) next»] — Akriti in Vyakarana glossary
Source: Wikisource: A dictionary of Sanskrit grammar

[«previous (A) next»] — Akriti in Chandas glossary
Source: Shodhganga: a concise history of Sanskrit Chanda literature

Ākṛti (आकृति) is one of the twenty-six varieties of Sanskrit metres (chandas) mentioned in the Chandaśśāstra 1.15-19. There are 26 Vedic metres starting with 1 to 26 letters in each pāda. It is a common belief that the classical metres are developed from these 26 metres. Generally a metre has a specific name according to it’s number of syllables (akṣara). But sometimes the same stanza is called by the name of another metre from the point of view of the pādas.

Ākṛti (आकृति) refers to a “form” (e.g., vikaṭākṛti—‘one’s furious form’), according to the Kularatnoddyota, one of the earliest Kubjikā Tantras.—Accordingly, “That, O goddess, is said to be the subtle (form), now listen to the gross one. [...] The great conch (she holds) makes her proud and the beauty of her crown enhances her beauty. (She is) adorned with a garland of severed heads that extends from the soles of the feet up to (her) neck. She drips with the blood that flows (from the heads) and is fatigued by the weight of her (dangling) rocking hair. Very fierce, she destroys (the universe) by licking (it up). She has big teeth and a thin stomach. She has long (dangling) breasts and a large chest. Her furious form [i.e., vikaṭa-ākṛti] is (lean) without flesh. She has six faces and twelve arms and her back is slightly bent”.

Ākṛti (आकृति) refers to “one’s appearance”, according to the King Vatsarāja’s Pūjāstuti called the Kāmasiddhistuti (also Vāmakeśvarīstuti), guiding one through the worship of the Goddess Nityā.—Accordingly, “[...] I venerate all [ten] Kuleśvarīs, starting with Sarvasampatpradā, the goddesses of the external ring of ten. They are auspicious and display the gestures of boon-giving and safety. I resort to Sarvajñā and other goddesses situated in the internal ring of ten. They carry a rosary and a book [in their hands], and their appearance is charming like camphor (karpūra-rucira-ākṛti). [...]”.

Ākṛti (आकृति) refers to the “shape (of a particular letter)”, according to the Cakrasaṃvara Samādhi [i.e., Cakrasamvara Meditation] ritual often performed in combination with the Cakrasaṃvara Samādhi, which refers to the primary pūjā and sādhanā practice of Newah Mahāyāna-Vajrayāna Buddhists in Nepal.—Accordingly, “The letter E shape [e.g., ekāra-ākṛti], abode of strong essence, the womb space of the lotus, Therein the midst, a secret Vaṃ, a beautiful bowl, the origin of all one’s self, An abode of perfectly pure awakened omniscience, beautiful divine power, And I, innately pure, praise the highest pleasure, the innate heroic couple”.

Akṛti.—(IE 7-1-2), ‘twentytwo’. Note: akṛti is defined in the “Indian epigraphical glossary” as it can be found on ancient inscriptions commonly written in Sanskrit, Prakrit or Dravidian languages.

[«previous (A) next»] — Akriti in Marathi glossary
Source: DDSA: The Molesworth Marathi and English Dictionary

[«previous (A) next»] — Akriti in Sanskrit glossary
Source: DDSA: The practical Sanskrit-English dictionary

6) [v.s. ...] a metre (consisting of four lines with twenty-two syllables each), [Ṛgveda-prātiśākhya] etc.

[«previous (A) next»] — Akriti in Hindi glossary
Source: DDSA: A practical Hindi-English dictionary

1) [noun] the shape, outline or configuration of anything; structure as apart from colour, material, etc.; a form.

2) [noun] the physical structure of anything; the body.

3) [noun] an early form of social group, composed of several families claiming descent from a common ancestor, bearing the same family name, and following the same chieftain; a clan.

4) [noun] a metre having four lines of twenty two syllables each.

5) [noun] a particular attainment or the process of attaining, mystical achievement through some hymns.

Verse 2.9.36 < [Chapter 9 - The Lord’s Twenty-One Hour Ecstasy and Descriptions of Śrīdhara and Other Devotees’ Characteristics]

III.2: Subjective nature of the appearance of the Buddhas < [Part 4 - Being born into the family of the Bodhisattvas, etc.]