Abhayamudra means something in Buddhism, Pali, Hinduism, Sanskrit, the history of ancient India, Marathi. If you want to know the exact meaning, history, etymology or English translation of this term then check out the descriptions on this page. Add your comment or reference to a book if you want to contribute to this summary article. 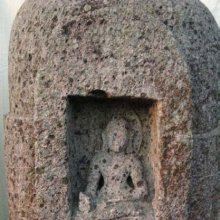 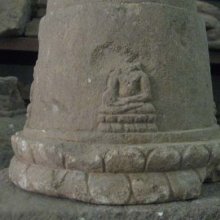 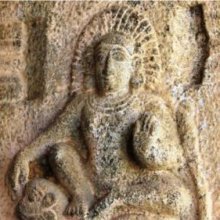 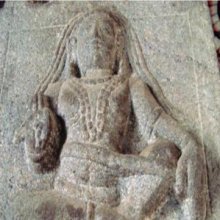 Abhaya Mudra (“The Gesture of Fearlessness”):—This mudra indicates that we should never entertain feelings of fear vis-à-vis God. Vishnu/Narayana is the ocean of compassion and perfect justice and thus there is nothing to fear from Him. It also reminds us that we should never be the caus e of fear to any other living being. Fear is the first obstacle in the path of spiritual development

Abhayamudrā (अभयमुद्रा) is a Sanskrit word referring to “the gesture of fearlessness”. The term mudrā translates to “hand seal”.

Source: Google Books: The Book of Hindu Imagery: Gods, Manifestations and Their Meaning

Abhaya(-mudra)—The right hand raised with the palm of the hand facing forwards. This indicates blessing, protection and reassurance.

The Gesture of Fearlessness (Abhaya mudra).—The left hand is held up in this gesture of dispelling fear. Our greatest fear is that of death and personal annihilation. The upheld hand is Śiva’s assurance of protection and preservation. It also indicates the necessity of cultivating harmlessness (ahiṃsā) and affording the gift of fearlessness to all other beings that we encounter.

Abhayamudrā (अभयमुद्रा) is the name of a gesture (mudrā) mentioned in the Śivapurāṇa 1.20, while explaining the mode of worshipping an earthen phallic image (pārthiva-liṅga) according to the Vedic rites:—“[...] he shall show the “Śiva-mudrā” with the mantra ‘Eṣa te’; the Abhayamudrā with the mantra ‘Yato Yataḥ’ etc. and the Jñāna-mudrā with the Tryambaka-mantra”.

Abhaya Mudra — the gesture of fearlessness — the palm displayed with the fingers pointing to the sky. Indicates the practice of harmlessness to all beings in word, deed and thought (ahimsa) and granting to all beings the gift of freedom from fear.

[«previous (A) next»] — Abhayamudra in Buddhism glossary
Source: Exotic India: Mudras of the Great Buddha

Abhaya in Sanskrit means fearlessness. Thus this mudra symbolizes protection, peace, and the dispelling of fear. It is made with the right hand raised to shoulder height, the arm crooked, the palm of the hand facing outward, and the fingers upright and joined. The left hand hangs down at the side of the body. In Thailand, and especially in Laos, this mudra is associated with the movement of the walking Buddha (also called 'the Buddha placing his footprint'). It is nearly always used in images showing the Buddha upright, either immobile with the feet joined, or walking.

This mudra, which initially appears to be a natural gesture, was probably used from prehistoric times as a sign of good intentions - the hand raised and unarmed proposes friendship, or at least peace; since antiquity, it was also a gesture asserting power, as with the magna manus of the Roman Emperors who legislated and gave peace at the same time.

In Gandhara art, this mudra was sometimes used to indicate the action of preaching. This is also the case in China where it is very commonly found in images of the Buddha, mainly in the Wei and Sui eras (fourth to seventh centuries).

The Abhaya mudra is displayed by the fifth Dhyani Buddha, Amoghasiddhi. He is also the Lord of Karma in the Buddhist pantheon. Amoghasiddhi helps in overcoming the delusion of jealousy. By meditating on him, the delusion of jealousy is transformed into the wisdom of accomplishment. This transformation is hence the primary function of the Abhaya mudra.

Abhaya-mudrā.—(HA), pose of hand offering protection, in which the palm of the right hand, facing the devotee, is held with fingers upwards. Cf. abhaya-hasta. Note: abhaya-mudrā is defined in the “Indian epigraphical glossary” as it can be found on ancient inscriptions commonly written in Sanskrit, Prakrit or Dravidian languages.

[«previous (A) next»] — Abhayamudra in Marathi glossary
Source: DDSA: The Molesworth Marathi and English Dictionary

abhayamudrā (अभयमुद्रा).—f (S) A re-assuring or encouraging countenance (as of an idol or a king).

[«previous (A) next»] — Abhayamudra in Sanskrit glossary
Source: DDSA: The practical Sanskrit-English dictionary

Abhayamudrā is a Sanskrit compound consisting of the terms abhaya and mudrā (मुद्रा).