Chapter 26 - The End And The Beginning 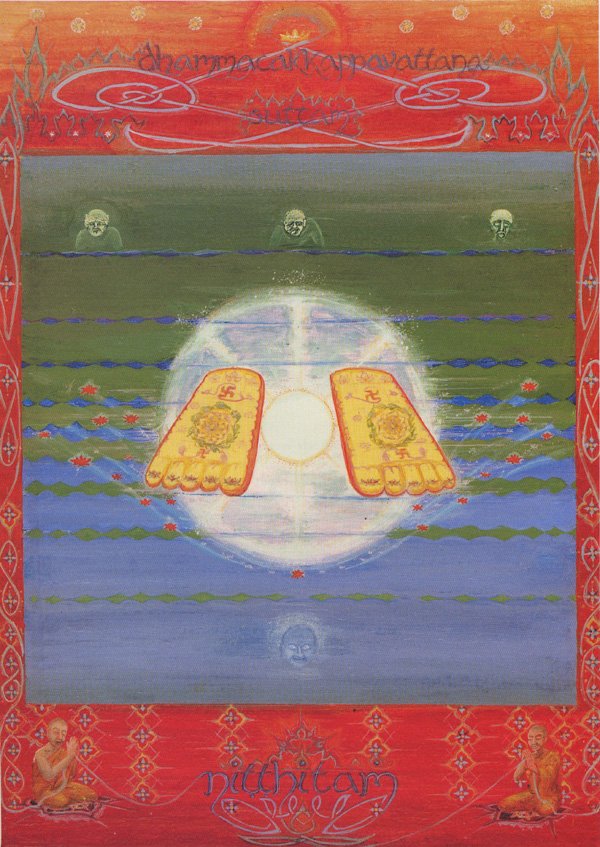 Dhammacakkappavattanasuttam nitthitam.
This concludes the Discourse on the Setting in Motion of the Wheel of Truth.

As we reach the end of the Sutta, let"s keep the main point in mind—that is, it is not how interesting an exposition this has been, how well it has been chanted or, as in this case, whether or not we enjoyed the pictures and appreciated the commentary. These things are behind us and we are left to examine and question: “What is the aim of life, or is there any? What can we know without recourse to belief?” We all seem to experience our life passing from birth and youth towards age and death; and we are searching for … happiness? knowledge? purpose? salvation? There is a search for something.

When the mind searches, it looks into this present moment. Instead of imagining that there is somewhere else to be reached or being influenced by belief, speculation or denial—allow the mind to reflect. This is the Way to non attachment, non holding, non gaining, non losing. It is the Way, then, to the Permanent, the Absolute, to Ultimate Peace and Truth. Independent of what we may experience in the form of thought or feeling, a mind that is fully aware of things as they are is at peace. And it is from that peaceful mind that the understanding of how to respond to daily life arises.

This Path of Awakening advocated by the Buddha involves an investigation into life while it is being lived with the guidance of the Four Noble Truths. If that search increases discontent or unhappiness, it is because we are looking in the wrong way or the wrong place. Suffering arises from a wrong view that imposes our personal biases onto the Way Things Are. So the way to peace is also the way towards knowing Truth. This interdependent relationship is best and most fully known within one"s own life and experience. It is our responsibility to discover it.

Life moves towards the three characters in the top of the panel—old age, sickness and death. But behind it all, there is the Law of Dhamma—all that arises passes away—and the Dhamma which is the Unconditioned Truth of our being. We can live this life following the Buddha Dhamma of the Eightfold Path. In so doing, we will move towards the brightness of awareness like the figure at the bottom of the panel.

Those enormous footprints are Buddha footprints, quite commonly rendered in stone at religious places in the East. All the marks and symbols on them are auspicious signs. The footprints themselves represent those of previous Buddhas who lived in times when people were physically much larger; in other words, they represent the continuum of the Awakened from an age lost in the mists of time. Their size reminds us that, at a time when things were very different from the way they are now, Buddhas existed. So we can feel that the 2,500 years from the time of Gotama Buddha is not so far away. People were much the same then as they are now. Old age, sickness and death felt the same, though, at times, they may have arisen from different causes. And the practice and the possibilities for enlightenment are very much the same.

I copied these particular footprints from a set carved by Mike Champion as a gift to the Sangha at Chithurst Monastery. They had been set in the lawn next to the ordination precinct (sima). I had remembered them because at the time, I was on the sima quite often practicing my part in a forthcoming ordination. After the ordination, I was due to leave Chithurst to help Ajahn Sumedho establish the Amaravati (Deathless Realm) Buddhist Monastery. So things at Chithurst were fastening in my mind. And I realized that at Amaravati I would have no spare moments for painting. Things came to this natural departure point—end of painting, end of Chithurst, and moving to the Deathless. Later, Mike told me that he"d copied the footprints from some originals taken from an old pilgrimage site in India. It was also called Amaravati. So that is what those footprints mean for me—the Path to the Deathless. Follow these tracks; it"s a Path you can walk on and it"s been cleared by the serene Buddha. Don"t settle for less.

In this painting, I tied things together. Sutta means “a thread” as well as “a discourse.” In the end, I tried to arrange this thread to enclose some of the patterns that are common in Thai art. Suttas are conventions and Thai monasticism is a convention for which I am very grateful. The monks in the painting are following a Thai custom. In Thailand, when bhikkhus chant a blessing, they frequently hold a thread which links them all together and which can be given as a token to those who receive the blessing. This thread, as well as this Sutta that the monks in the painting have just chanted, is given as a blessing to all human beings. Please take it and use it well.