Chapter 2 - Thus Have I Heard 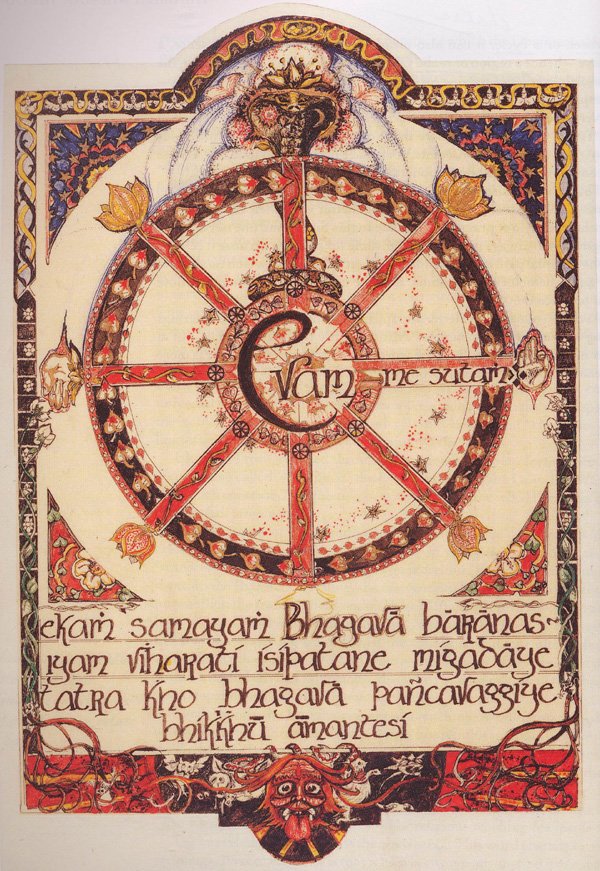 Following an ancient tradition, all the suttas begin with these first three words: “Evam me sutam.” It is a reference to the oral tradition which says that the person who first heard this discourse was the Buddha"s disciple Ananda. Venerable Ananda, however, was not present when this teaching was given. It is believed that when he became the Buddha"s attendant after twenty years in the Order, Venerable Ananda asked if he could be present whenever the Buddha gave a talk on Dhamma, and if the Buddha could give him the essence of all his earlier discourses or sermons. Thus when reading this text, the reader must bear in mind that it is by no means a strictly literal account of what the Buddha said, but something which has been recorded. The reciter is making it clear that what he is transmitting is devoid of any personal additions or interpretations. This is the way this particular teaching came to him, and he is simply reciting it as faithfully as possible.

Ekam samayam bhagava Baranasiyam viharati Isipatane migadaye tatra kho bhagava pancavaggiye bhikkhu amantesi …
Once the Blessed One was staying in the Deer Park at Isipatana, near Varanasi. There he addressed the bhikkhus of the Group of Five thus …

All the suttas begin with a brief description of the place where the sermon was delivered. The setting here is the Deer Park at Isipatana, known in modern times as Sarnath. Highly regarded as the place where the Buddha gave the First Sermon, it has been a Buddhist pilgrimage site for many years. A column built by Emperor Asoka, an Indian ruler (third century B.C.) who converted to Buddhism, and did much to propagate it throughout his empire, marks the spot where the First Sermon is believed to have been given. Sarnath is located near Varanasi, or Baranasi as it is sometimes called. Varanasi was a holy city long before the time of the Buddha, and over the centuries, many thousands of people have gone there to die. It is considered very auspicious to die and be cremated at Varanasi, and to have one"s ashes thrown into the river Ganges. Being a holy place at that time, Varanasi also became the natural resort of seers, sages and mendicants as well as people from all over the surrounding area who would gather to exchange views on matters of religious doctrine and practice. This is where Gotama and his ascetic companions had been dwelling until he had decided to abandon the extreme of self mortification and to withdraw from the others in order to practice in solitude. And it was to this place that, as an Awakened One, Gotama returned to begin teaching his five companions.

The Sutta addresses these five as pancavaggiye bhikkhu, the Group of Five bhikkhus. Nowadays, “bhikkhu” just means a Buddhist monk. Etymologically, “bhikkhu” comes from the word used for alms and is still used within that context in countries such as India, Afghanistan or Pakistan where it survives as baksheesh, meaning a tip, a gift made as a special favor. If you go to those places nowadays, you will meet more “baksheesh!” than bhikkhus.

Anyway, these five were named Kondanna, Vappa, Bhaddiya, Mahanama and Assaji. Kondanna was the eldest. Many years previously, as a novice brahmin, he had been invited to Suddhodana Raja"s palace along with seven of his peers to see the baby Siddhattha and give predictions as to his destiny. They all agreed that this babe would be either a great emperor or a Buddha; although it was Kondanna alone who reckoned that Siddhattha was destined for Buddhahood. Four of the brahmins that had been present at the Raja"s palace later told their sons to keep their eyes on Siddhattha, as he was destined for greatness. These sons grew up to become the other four of the Group of Five.

The Buddha here is addressed as “Bhagava” which means “The One who has Great Fortune” or “The Blessed One,” sometimes translated as “The Lord.” The term is always used in a spiritual context by his disciples, and implies someone who has both a great deal to offer and the capacity to make it accessible to the manyfolk. The Buddha, however, generally referred to himself as the “Tathagata,” or “Thus Gone”—someone who has completed the round (of birth), finished, gone beyond—not as “Bhagava.” This is because a Buddha does not identify with any of the qualities he manifests, that is, he regards all these as less important than the fact that he has gone beyond. As a source of inspiration and encouragement for the unawakened disciple, the power of such a living presence of Truth in human form as a Buddha cannot be overestimated. However, the Buddha repeatedly emphasized holding to the Dhamma, his teaching, as something that would have a greater and clearer long term value than devotion to him as “The Blessed One.” Adoration of the Buddha seems to have been a cause for the long delay in Venerable Ananda"s own enlightenment.

Around the frame of the painting are some of the beings who revere the Buddha. At the top appears a line of devas (heavenly beings), who are all exclaiming their delight that a Blessed One has come into the world to turn the Wheel of the Law. Down at the bottom are the beings in the hell realms, in states of misery. It is said that in the lowest hells, it is pitch black and there are only a few times when it is possible to see. These are, when a Tathagata is born, when he attains Awakening, when he begins the teaching of the Dhamma, and when he leaves the mortal realm. I think that in my most deluded teenage years, just seeing a picture of the Buddha with that inexplicable but evocative gentle smile and stillness sent some light into my mind. Not much, but enough of a glimmer to consider that it might be worth finding out what he had to say … one day. Maybe it"s like that in hell. Hell is depicted in my painting by three animals—the pig symbolizes delusion; the rooster is greed; and the snake represents hatred. The overwhelming presence of these is what hell is.

The Great Wheel of the Law here is represented by a wheel with eight spokes. This symbol has come down to us from the early centuries of Buddhist India, there being no iconography in the Buddha"s time. The earliest symbols used by Buddhists were—the Bodhi Tree with an empty space underneath it; the Bodhi leaf (here decorating the rim of the Wheel); the Parasol (a symbol of elevated status) poised over an empty space or a throne; the special and highly decorated Footprints; the Stupa (ceremonial tomb containing the ashes of a cremated saint); and the Wheel, which may have been a transformed sun symbol or simply that which is conducive to going places.

In my painting, there is a large naga, or serpent figure coiled around part of the wheel. Nagas are different from ordinary snakes. They are often mentioned in the scriptures as possessing special powers. They are giant hooded snakes who live in the water, but can take on human form and give birth to their young on the flat plains. They then go back to the sea when the land floods. Nagas appear in the celestial realms as well as part of the retinue of Virupakkha, a celestial World Guardian, who is mentioned later in this Sutta. There also seem to be a few ranging round free lance, generally harmless if you don"t annoy them but occasionally needing to be tamed by an Arahant.

Snakes can slough their skins and seemingly transform themselves, so the serpent is a figure of transformation; in sundry early religions, it acts as the intermediary between the earthly plane and the heavenly plane. The Buddha himself is sometimes referred to as the “Great Naga”—someone undergoing a journey of transformation from the worldly to the spiritual plane.

Here the serpent is used as a symbol of the practice of Dhamma, the transformation of the human mind as it applies itself to the realization of Ultimate Truth. Such an Awakening deserves auspicious signs, so here the naga has the figures of the sun and moon on its hood and wears a lotus as a crown. The sun and moon represent the polarities of rationality and mystical intuition or gnosis; the lotus is the crown of their union—enlightened wisdom that has the depth and sensitivity of gnosis and the analytical precision of rationality. Such is the fruition of the practice that is intimately related to the teaching. As it comes alive, the Dhamma sloughs off the old skin of habit and attachment that we have taken ourselves to be. Shedding one"s skin can be alarming, but for those who are prepared for such an experience, the Buddha gave the following words …