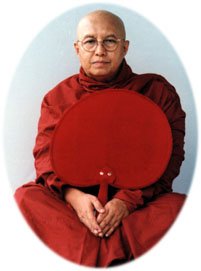 Ashin Janaka was born in Pyinma village, Taungdwingyi township, on Tuesday 24 July, 1928. His parents were U Phyu Min and Dhw Shwe Yee. At the age of 15 he was initiated at the Tawya Beikman Monastery as a Samanera (novice monk) under the tutelage of the Abbot, Ven. U Malvamsa receiving the name of Shin Janaka. He delighted in the study of Buddha Dhamma devoting his whole time to studying the scriptures. After that, he continued his studies of English under Myaung mya Sayadaw U Dhammananda of Pathein and returned to Mandalay Mahavisuddhayone University to fulfil his duties as a lecturer in Buddhist scriptures.

In 1954 he was invited by the state Buddha Sasana Organisation to perform Palivisodhaka (editorial duties. In 1957 the Ven. Sayadaw spent nearly six years at Mahavisuddharma Monastery, Colombo, Sri Lanka, where he continued his studies of English, Sanskrit, Hindi and Sinala language. While at Colombo he took the London G.C.E. (A level) examination and passed.

He returned to Burma in June 1963, and at the invitation of the state Buddha Sasana Organisation, he took up residence at Kaba Aye where he edited the publications of Pali Texts.

In 1967 he performed the duties of Nayaka Sayadaw (Meditation Teacher) at Mahasi Sasana Yeiktha Meditation Centre under the instruction of the Most Venerable Mahasi Sayadaw and rendered assistance in the performance of Piriyatti (studies) and Patipatti (meditation practice) duties.

In February 1979, the Venerable Sayadaw took up residence at Chanmyay Yeiktha Meditation Centre which was donated to him by a number of devotees, and spared no pain in performing the dual duties of Meditation Master in Patipatti as well as Pariyatti. He has been since then, known as the Chanmyay Sayadaw.

In April 1995 some devotees in Hmawbi and Yangon donated the Sayadaw a ten acre plot of land near Hmawbi to set up a meditation centre. The land is quiet and cool, with many big shady trees. On this land the Sayadaws disciples have been constructing dormitories, meditation halls, meditation platforms, kitchens, dinning halls, etc.